Chad is a one party dominant state with the Patriotic Salvation Movement in power. Opposition parties are allowed, but are widely considered to have no real chance of gaining power.

Other party participating in the 2006 presidential election 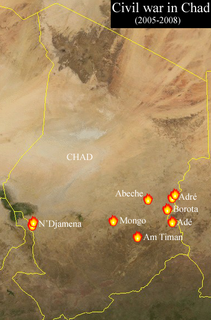 The Third Chadian Civil War began in December 2005. Since its independence from France in 1960, Chad has been swamped by the civil war between the Arab-Muslims of the north and the Sub-Saharan-Christians of the south. As a result, leadership and presidency in Chad drifted back and forth between the Christian southerners and Muslim northerners. When one side was in power, the other side usually started a revolutionary war to counter it. It is the most recent civil war to erupt in Chad.

Change 2005 was a political alliance in Burkina Faso, founded to contest the presidential election in 2005. The incumbent, Blaise Compaore, was standing for a third term and was expected to win despite claims that another term in office would be unconstitutional. He was re-elected with 80.35% of the votes.

The National Alliance for Development and Democracy is a political alliance in Benin. Its current president is Valentin Aditi Houde and is supportive of the Yayi Boni government.

The Rally for Democracy and Renewal is a political party in the Comoros.