Raions of Ukraine (Ukrainian : Райони України) are the second level of administrative division in Ukraine, below the oblast.

As an administrative unit raions have existed in Ukraine since 1922 as part of an administrative reform in the Soviet Union. [1] [nb 1] On 17 July 2020, the Verkhovna Rada (Ukraine's parliament) approved the administrative reform to merge most of the existing 490 raions, resulting in creation of 136 new raions. [3] The amalgamated hromadas have taken over most tasks of the raions (education, healthcare, sport facilities, culture, and social welfare). [4]

Some cities of oblast subordination along with the two cities of national significance (Kyiv and Sevastopol) are also divided in "city raions". "City raions" have their own local administration and are subordinated directly to a city. They may contain other cities, towns, and villages.

Note: region is a general term referring to oblasts, the republic [nb 2] and cities with special status. [nb 3] The population recorded in the table is listed in accordance to the latest census taken in the country, Ukrainian Census (2001). Asterisk (*) identifies raions with administrative centers located outside of them (usually separately incorporated).

Source: New rayons: maps and structure and with maps Note: de facto Crimea continue to use the old administrative division. Raions located in the temporarily occupied territories of Donbass (see below in grey) exist only de jure.

Raions located in the temporarily occupied territories of Ukraine 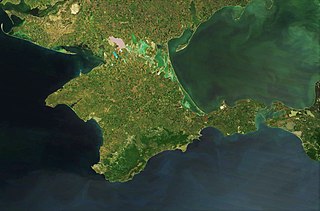 Crimea is a peninsula located on the northern coast of the Black Sea in Eastern Europe that is almost completely surrounded by both the Black Sea and the smaller Sea of Azov to the northeast. The status of Crimea is disputed. It is claimed by Ukraine and recognized as Ukrainian by most other countries, although it has been administered by Russia following its annexation to the country in 2014. Crimea is located south of the Ukrainian region of Kherson, to which it is connected by the Isthmus of Perekop, and west of the Russian region of Kuban, from which it is separated by the Strait of Kerch though linked by the Crimean Bridge since 2018. The Arabat Spit is located to the northeast, a narrow strip of land that separates a system of lagoons named Sivash from the Sea of Azov. Across the Black Sea to its west is Romania, and to its south, Turkey. 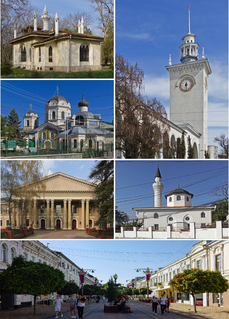 Simferopol is the second-largest city on the Crimean Peninsula, and the capital of the (Autonomous) Republic of Crimea. Simferopol is an important political, economic and transport hub of the peninsula, and serves as the administrative centre of both Simferopol Municipality and the surrounding Simferopol District. Founded on the site of a Crimean Tatar town Aqmescit, the city adopted its current name after the annexation of the Crimean Khanate to the Russian Empire. The population was 332,317 . 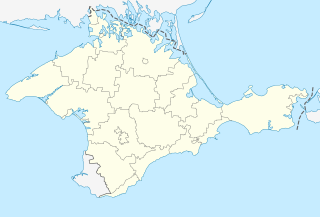 Bilohirsk is a town and the administrative centre in Belohirsk Raion, one of the raions (districts) of the Autonomous Republic of Crimea, a territory recognised by a majority of countries as part of Ukraine and annexed by Russia. Population: 16,354 . 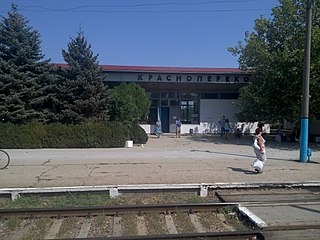 Krasnoperekopsk is a town of regional significance that was, following the 2014 annexation of Crimea, incorporated into Russia's Republic of Crimea, though the territory is recognised by a majority of countries as part of Ukraine within the Autonomous Republic of Crimea. It also serves as the administrative center of Krasnoperekopsk Raion, although it is not a part of the raion (district). Population: 26,268 . 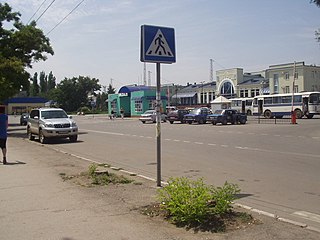 Dzhankoi or Jankoy is a town of regional significance in the north of the Crimea. It also serves as administrative center of Dzhankoi Raion although it is not a part of the raion (district). Population: 38,622 .

The Taurida Governorate or the Government of Taurida, was a historical governorate of the Russian Empire. It included the Crimean Peninsula and the mainland between the lower Dnieper River and the coasts of the Black Sea and Sea of Azov. It was formed after the Taurida Oblast was abolished in 1802 in the course of Paul I's administrative reform of the South-Western territories that had been annexed from the Crimean Khanate. The governorate's centre was the city of Simferopol. The province was named after the ancient Greek name of Crimea - Taurida.

Armenians have maintained a presence in the Crimea since the Middle Ages. The first wave of Armenian immigration into this area began during the mid-eleventh century and, over time, as political, economic and social conditions in Armenia proper failed to improve, newer waves followed them. Today, between 10 and 20 thousand Armenians live in the peninsula. 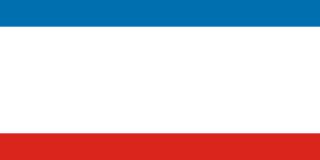 The Autonomous Republic of Crimea is, de jure, an autonomous republic of Ukraine encompassing most of Crimea that was annexed by the Russian Federation in 2014. 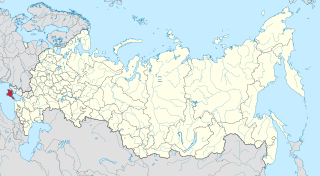 The Republic of Crimea is a federal subject of Russia that is located on the Crimean Peninsula. The capital city and largest city within the republic is Simferopol, which is also the second largest city of Crimea, behind the federal city of Sevastopol. At the last census, the republic had a population of 1,891,465 . 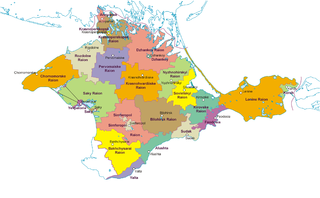 Kuibysheve is a rural settlement in the Yalta Municipality of the Autonomous Republic of Crimea, a territory recognized by a majority of countries as part of Ukraine and annexed by Russia as the Republic of Crimea.

Azovske is an urban-type settlement in Dzhankoi Raion, to the southeast of the town of Dzhankoi in northeastern Crimea, along highway E97. Population: 3,649 .

The Crimea Railway is a railroad located in Crimea, providing passenger and freight services to Sevastopol and the Republic of Crimea.

Republican Football Federation of Crimea (RFFK) is a football governing body in the region of Crimea.

Crimean Directorate of Railway Transportation – directorate of Near-Dnipro Railways. Management services to the Autonomous Republic of Crimea and Sevastopol. By March 2014 also south-eastern part of Kherson and south-western parts of Zaporozhye region. In the management of living about 2.5 million people.