This is a list of school districts in Ontario.

There were a number of schools governed by "school authorities," which managed schools in remote and sparsely populated regions. Effective September 1, 2009, 20 isolated school authorities were amalgamated with district school boards.

Prior to 1998, Ontario had 124 school districts within the province including the list above [2]

From 1846 to the late 1800s schools were assigned to school districts or School Sections. [3] Instead of names for each school, they were assigned numbers, e.g. SS No 11.

The York Catholic District School Board is the English-language public-separate school district authority for the Regional Municipality of York in Ontario, Canada. Its head office is in Aurora.

The Dufferin-Peel Catholic District School Board is the separate school board that oversees 148 Catholic school facilities throughout Peel Region and Dufferin County. It employs roughly 5,000 teachers; about 3,000 at the elementary level, and the remaining 2,000 at the secondary school and continuing education level, for 90,000 students.

The Conseil scolaire catholique du Nouvel-Ontario is a school board in the Canadian province of Ontario. The board is the school district administrator for French language Roman Catholic separate schools in the city of Greater Sudbury and the districts of Sudbury, Manitoulin and Algoma. 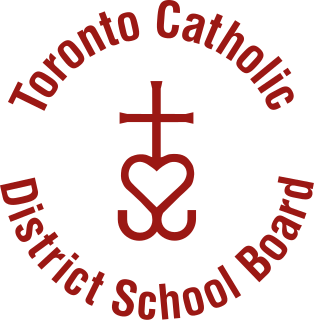 The Toronto Catholic District School Board is an English-language public-separate school board for Toronto, Ontario, Canada, headquartered in North York. It is one of the two English boards of education in the City of Toronto, serving the former municipalities of Scarborough, North York, York, East York, Old Toronto and Etobicoke. With 92,000 students, the TCDSB is one of the largest school boards in Canada, and is the largest publicly funded Catholic school board in the world. Until 1998, it was known as the Metropolitan Separate School Board (MSSB) as an anglophone and francophone separate school district.

The Conseil scolaire Viamonde (CSV) is a public-secular French first language school board, and manages elementary and secondary schools in the Ontario Peninsula and the Greater Golden Horseshoe. The school board operates 41 elementary schools and 15 secondary schools within that area. The school board operates two offices, one in Toronto, and one in Welland. The educational management office is located in the Maple Leaf neighbourhood of Toronto, whereas the business and financial management office is located in Welland.

The Halton Catholic District School Board (HCDSB) serves over 37,000 students at its 46 elementary schools, 9 secondary schools and 3 continuing education facilities. The HCDSB serves the communities of Burlington, Halton Hills, Milton, and Oakville, with the main Board office located in Burlington, Ontario, Canada.

Silverthorn, often misspelled as Silverthorne, is a neighbourhood in Toronto, Ontario, Canada. It was part of the former City of York before the amalgamation of Toronto in 1998. The approximate boundaries are the GO Transit Barrie line railway tracks to the east, Black Creek Drive and the CP railway line to the west and the former boundaries of the City of York to the north and south. The neighbourhood west of Keele Street is known as Keelesdale. For demographic purposes, the city breaks the area down into two neighbourhoods Keelesdale-Eglinton West, south of Eglinton, and Beechborough-Greenbrook north of Eglinton.

The Conseil des écoles catholiques du Centre-Est, formerly known as the Conseil des écoles catholiques de langue française du Centre-Est (CECLFCE), is Ontario's largest French-language school board. The CECCE operates 41 elementary schools, 10 high schools, and a school for adults. Over 21,000 students from Junior Kindergarten to Grade 12 attend CECCE schools. The board employs approximately 2,000 teachers and professionals and it covers an area of 35,615 km2, including the City of Ottawa. Its headquarters are in the Gloucester area of Ottawa.

The Wellington Catholic District School Board is a school board in Ontario, Canada, serving the students of the City of Guelph and Wellington County. There are 4 high schools and 18 elementary schools serving roughly 8000 students.

The Hamilton-Wentworth Catholic District School Board (HWCDSB) is the Catholic school board for the city of Hamilton, which includes the former Wentworth County. It currently operates 49 elementary schools and 7 secondary schools, along with one continuing education school.

Maryvale is a neighbourhood in the Scarborough section of Toronto, Ontario, Canada. It is located on the edge of Scarborough with its western border being Victoria Park Avenue. To the north it is bordered by Highway 401, to the east by Warden and to the south by railroad tracks.

West Toronto Collegiate Institute(WTCI, West Toronto) is a former public high school in the Brockton Village neighbourhood in Toronto, Ontario, Canada from 1972-2010. It is located at 330 Lansdowne Avenue, just north of College Street. It was owned and operated by the Toronto District School Board (TDSB) and previously by the Toronto Board of Education. The TDSB transferred ownership of West Toronto Collegiate Institute to Conseil scolaire Viamonde (CSV) and the Conseil scolaire de district catholique Centre-Sud (CSDCCS) in October 2011.