This is a list of Spanish ships of the line (comprising the battlefleet) built or acquired during the period 1640-1854: Those with 94 or more guns were three-deckers, while all the others listed were two-deckers. Those ships with secular names (e.g. royal, geographical or adjectival names) were additionally given an official religious name (or advocación) which appears below in parenthesis following the secular name.

Until 1716 there was not one single Spanish Navy but several naval forces, of which the Armada del Mar Océano was the primary one but several other distinct forces existed. The Real Armada ("Royal Navy") was created by the newly-established Bourbon government in 1716, but the other armadas (in Spanish, the word "armada" is used for both "navy" and "fleet") endured for several years thereafter. During the early 1750s, the term Real Armada was replaced by Armada Española.

[Note that the Guipuzcoano 64 - captured by the United Kingdom in 1780 and renamed Prince William - was a private ship of the Real Compañía Guipuzcoana de Caracas, and was not part of the Spanish Navy.]

Spain completed no further ships of the line after 1796 for more than half a century, although three ships were under construction in Ferrol and Havana at the time of the French occupation (work on them ceased and they were all broken up on the stocks), and five 74-gun ships were acquired from Russia in February 1818, although these were in poor condition and were quickly taken to pieces without seeing any service. Finally, two 86-gun ships were ordered in 1850 and laid down on 19 November and 2 December 1850 respectively.

Seven ships of the Royal Navy have been named HMS Mars, after Mars, the Roman god of war:

Neptune was a Bucentaure-class 80-gun ship of the line of the French Navy. Built during the last years of the French Revolutionary Wars she was launched at the beginning of the Napoleonic Wars. Her brief career with the French included several major battles, though she spent the last 12 years of her life under the Spanish flag. 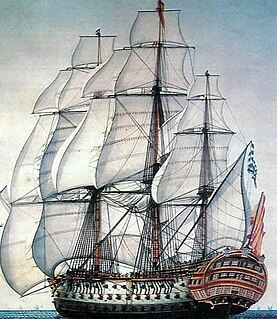 Santísima Trinidad was a Spanish first-rate ship of the line with 112 guns. This was increased in 1795–96 to 130 guns by closing in the spar deck between the quarterdeck and forecastle, and around 1802 to 140 guns, thus creating what was in effect a continuous fourth gundeck although the extra guns added were actually relatively small. She was the heaviest-armed ship in the world when rebuilt, and bore the most guns of any ship of the line outfitted in the Age of Sail.

Pluton was a Téméraire class 74-gun French ship of the line built at Toulon. She was one of two prototypes for a derivative sub-class of the original design; this sub-class was specially intended for construction in some of the shipyards in states occupied by the French, where there was less depth of water than in the main French shipyards. Although the Pluton were built at Toulon, all other vessels of this sub-class were built in these overseas yards, notably at Antwerp but also at Genoa, Trieste, Venice, Amsterdam, Flushing and Rotterdam. 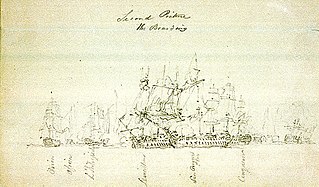 The San Agustín was a 74-gun ship of the line built at the royal shipyard in Guarnizo (Santander) and launched in 1768.

Neptuno was an 80-gun Montañes-class ship of the line of the Spanish Navy. She was built in 1795 and took part in the French Revolutionary and Napoleonic Wars. She fought with the Franco-Spanish fleet in the battle of Trafalgar, and was wrecked in its aftermath. 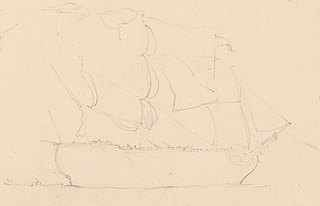 San Ildefonso was a ship of the Spanish Navy launched in 1785. She was designed to be lighter than traditional Spanish vessels which had had difficulty matching the speed of ships of the Royal Navy. Though nominally a 74-gun ship San Ildefonso actually carried 80 cannons and howitzers. She saw service against French and British vessels in the late 18th century, sailed twice to the Americas and was trapped in Cadiz by the British blockade. San Ildefonso was captured by the British third-rate HMS Defence at the Battle of Trafalgar and successfully weathered the storm afterwards to be taken into Royal Navy service as HMS Ildefonso.

Rayo was an 80-gun ship of the line (navío) of the Spanish Navy. As was traditional for Spanish ships not named after a saint, its second, dedicatory name (avocacion) was San Pedro Apóstol. She underwent rebuilding at Cartagena from 1803 to 1805, emerging as a three-decked ship with 100 guns. She then fought at the Battle of Trafalgar during the Napoleonic Wars and was dismasted as a result of damage sustained in the battle. When she sortied after Trafalgar in order to recover prizes, the warship was captured by HMS Donegal. Subsequently, she ran aground and was wrecked in a storm. Her broken hull was set ablaze and destroyed by British sailors on 31 October. 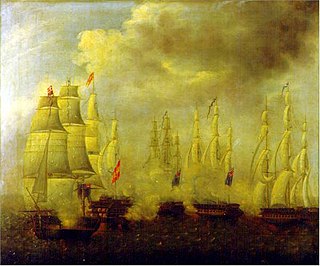 San Francisco de Asis was a Spanish 74-gun ship of the line launched in 1767 from the royal shipyard in Guarnizo (Cantabria). She was wrecked after the Battle of Trafalgar in 1805 near Puerto de Santa Maria.

Montañés was a 74 gun third-rate Spanish ship of the line. The name ship of her class, she was built in the Ferrol shipyards and paid for by the people of Cantabria. She was built following José Romero y Fernández de Landa's system as part of the San Ildefonso class, though her were amended by Retamosa to refine her buoyancy. She was launched in May 1794 and entered service the following year. With 2400 copper plates on her hull, she was much faster than other ships of the same era, reaching 14 knots downwind and 10 knots upwind.

The Spanish ship Argonauta was a third-rate 80 gun ship of the line of the Spanish Navy. She had 24, 18 and 8 pounder guns spread over two decks. Her usual crew was 642, though it was 956 at the Battle of Cape Finisterre and 800 at Trafalgar.