This is a list of heads of state, government leaders, and other rulers in the year 1076.

Head of government is a generic term used for either the highest or second highest official in the executive branch of a sovereign state, a federated state, or a self-governing colony, who often presides over a cabinet, a group of ministers or secretaries who lead executive departments. The term "head of government" is often differentiated from the term "head of state", as they may be separate positions, individuals, or roles depending on the country.

The Almoravid dynasty was an imperial Berber Muslim dynasty centered in Morocco. It established an empire in the 11th century that stretched over the western Maghreb and Al-Andalus. Founded by Abdallah ibn Yasin, the Almoravid capital was Marrakesh, a city the ruling house founded in 1062. The dynasty originated among the Lamtuna and the Gudala, nomadic Berber tribes of the Sahara, traversing the territory between the Draa, the Niger, and the Senegal rivers.

Yusuf ibn Tashfin also, Tashafin, Teshufin; or Yusuf was leader of the Berber Moroccan Almoravid empire. He co-founded the city of Marrakesh and led the Muslim forces in the Battle of Zallaqa/Sagrajas. Ibn Tashfin came to al-Andalus from Africa to help the Muslims fight against Alfonso VI, eventually achieving victory and promoting an Islamic system in the region. He was married to Zainab al-Nafzawiyya, whom he reportedly trusted politically.

The Fatimid Caliphate was a Shia Islamic caliphate that spanned a large area of North Africa, from the Red Sea in the east to the Atlantic Ocean in the west. The dynasty of Arab origin ruled across the Mediterranean coast of Africa and ultimately made Egypt the center of the caliphate. At its height the caliphate included in addition to Egypt varying areas of the Maghreb, Sudan, Sicily, the Levant, and Hijaz.

The Byzantine Empire, also referred to as the Eastern Roman Empire or Byzantium, was the continuation of the Roman Empire in its eastern provinces during Late Antiquity and the Middle Ages, when its capital city was Constantinople. It survived the fragmentation and fall of the Western Roman Empire in the 5th century AD and continued to exist for an additional thousand years until it fell to the Ottoman Turks in 1453. During most of its existence, the empire was the most powerful economic, cultural, and military force in Europe. Both the terms "Byzantine Empire" and "Eastern Roman Empire" are historiographical terms created after the end of the realm; its citizens continued to refer to their empire simply as the Roman Empire, or Romania (Ῥωμανία), and to themselves as "Romans". 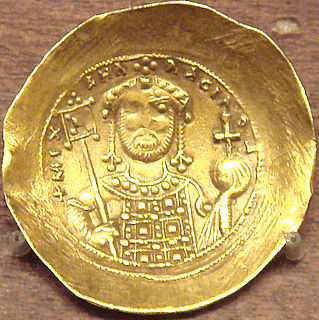 Emperor Shenzong of Song, personal name Zhao Xu, was the sixth emperor of the Song dynasty in China. His original personal name was Zhao Zhongzhen but he changed it to "Zhao Xu" after his coronation. He reigned from 1067 until his death in 1085.

Demetrius Zvonimir was King of Croatia and Dalmatia from 1075 until his death in 1089. He was crowned as king in Solin on 8 October 1076. Zvonimir also ruled as Ban of Slavonia (1064–1074), and was named Duke of Croatia in around 1075. His native name was Zvonimir; he adopted the forename Demetrius at his coronation.

The Kingdom of France was a medieval and early modern monarchy in Western Europe. It was one of the most powerful states in Europe and a great power since the Late Middle Ages and the Hundred Years' War. It was also an early colonial power, with possessions around the world. 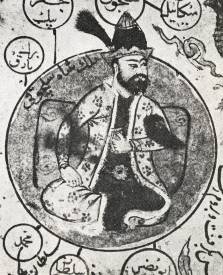 Jalāl al-Dawla Mu'izz al-Dunyā Wa'l-Din Abu'l-Fatḥ ibn Alp Arslān, better known by his regnal name of Malik-Shah I, was Sultan of the Seljuq Empire from 1072 to 1092.