The table below lists the runners up ( jun-yusho ) in the top makuuchi division at official sumo tournaments or honbasho since the six tournaments per year system was instituted in 1958. The runner up is determined by the wrestler(s) with the second highest win-loss score after fifteen bouts, held at a rate of one per day over the duration of the 15-day tournament. [1] Names in italics mark a jun-yusho performance by a maegashira or lower ranked wrestler. Figures in brackets mark the number of jun-yusho earned up to that tournament for wrestlers who were runner up more than once. Those with a P after their name means they were the runner up after a playoff.

Kyokutenhō Masaru in Nalaikh, Ulan Bator, Mongolia is a former professional sumo wrestler. He made his debut in March 1992 out of Ōshima stable, with the first group of Mongolians ever to join the sport in Japan, reaching the top makuuchi division in January 1998. In his exceptionally long career he received seven special prizes for Fighting Spirit, and won one yūshō, in May 2012 from the maegashira ranks, which made him at 37 the oldest first–time yūshō winner in sumo history, and he was runner-up in one other tournament. His highest rank was sekiwake, which he held on three occasions. He was the first wrestler since the 1950s to be ranked in the top division after the age of 40. He made more appearances in the top division than any other wrestler at 1470, and only Ōshio fought more than his 1870 career bouts. He announced his retirement in July 2015 and declared his intention to stay in sumo as an elder, having acquired Japanese citizenship in 2005. In 2017 he became the head coach of Tomozuna stable and he is known as Tomozuna-oyakata. 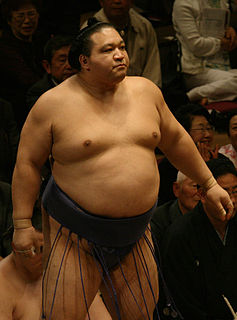 Chiyotaikai Ryūji, is a Japanese former sumo wrestler. He made his professional debut in 1992 and reached the top makuuchi division in 1997. He held the second highest rank of ōzeki or champion for 65 consecutive tournaments from 1999 until 2009, making him the longest serving ōzeki in the modern era. He won three top division yūshō or tournament championships, and was a runner-up on seven other occasions. However, he also held the dubious record of being in danger of demotion from ōzeki fourteen times. He wrestled for Kokonoe stable until his retirement in January 2010 at the age of 33. He remained in sumo as a coach at his stable, and became the head coach in August 2016 following the death of Chiyonofuji.

Hakuhō Shō is a professional sumo wrestler (rikishi) born in Ulaanbaatar, Mongolia. Making his debut in March 2001, he reached the top makuuchi division in May 2004. In May 2007 at the age of 22 he became the second native of Mongolia, and the fourth non-Japanese overall, to be promoted to the highest rank in sumo, yokozuna. 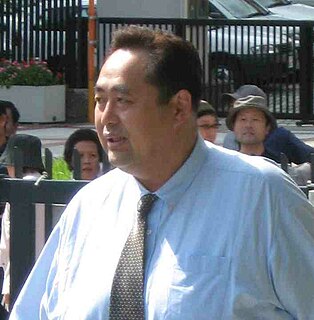 Ōnokuni Yasushi is a former sumo wrestler from Hokkaidō, Japan. Making his professional debut in 1978, he reached the top division in 1983. In 1987 he won his first yūshō or tournament championship with a perfect score and became the sport's 62nd yokozuna. However, he was able to win only one more championship before his retirement in 1991. He has remained in sumo as a coach and in 1999 became the head of Shibatayama stable. He was elected to the Japan Sumo Association's board of directors in 2018. His peak weight was 210 kg (463 lbs) in May 1989.

Dejima Takeharu is a former sumo wrestler from Kanazawa, Ishikawa, Japan. A former amateur champion, he made his professional debut in 1996, reaching the top makuuchi division the following year. In July 1999 he won the yūshō or tournament championship and earned promotion to the second highest rank of ōzeki. He lost the rank in 2001 and, for the most part, remained a maegashira until his retirement in 2009. He won ten special prizes and six gold stars over his long career. He wrestled for Musashigawa stable. He is now an elder of the Japan Sumo Association under the name Ōnaruto Oyakata. 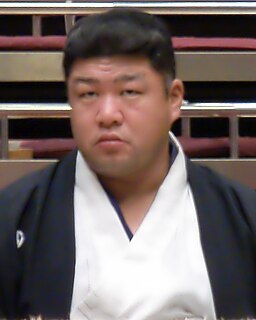 Musōyama Masashi is a former sumo wrestler from Mito, Ibaraki, Japan. A former amateur champion, he turned professional in January 1993, and he won promotion to the top makuuchi division in just four tournaments. He won thirteen special prizes and spent a total of 31 tournaments at komusubi and sekiwake before finally reaching the second highest rank of ōzeki in 2000, shortly after winning his only top division tournament championship or yūshō. He retired in 2004. He is now the head coach of Fujishima stable.

Wakanami Jun was a sumo wrestler from Iwai, Ibaraki, Japan. His highest rank was komusubi. He won a top division tournament championship in March 1968. He was also a sumo coach.

Tochiazuma Tomoyori is a former sumo wrestler from Sōma, Fukushima Prefecture, Japan. His highest rank was sekiwake, which he held for one tournament in 1970. He won the top division championship in January 1972. After retirement he worked as a coach at his stable, Kasugano, until 1990 when he set up his own Tamanoi stable. He is the father of the former ōzeki Tochiazuma Daisuke, and upon his retirement as a coach in 2009 his son took over from him.

Kiyokuni Katsuo is a former sumo wrestler from Ogachi, Akita, Japan. His highest rank was ōzeki, which he held from 1969 to 1974. He won one top division yūshō or tournament championship and was a runner-up in five other tournaments. He also earned seven special prizes and seven gold stars. After his retirement he was the head coach of Isegahama stable.

Hasegawa Katsutoshi is a former sumo wrestler from Kurisawa, Hokkaido, Japan. He began his professional career in 1960, reaching the top division in 1965. He won eight special prizes for his achievements in tournaments and earned nine gold stars for defeating yokozuna. He won a tournament championship or yūshō in 1972 and was a runner-up in two other tournaments. His highest rank was sekiwake. He retired in 1976 and became an elder of the Japan Sumo Association, working as a coach at Sadogatake stable until his retirement in 2009.

Daikirin Takayoshi, born Masakatsu Tsutsumi, was a sumo wrestler from Saga Prefecture, Japan. He began his professional career in 1958 and reached his highest rank of ōzeki twelve years later in 1970. He retired in 1974, and until June 2006 he was an elder of the Sumo Association under the name Oshiogawa. 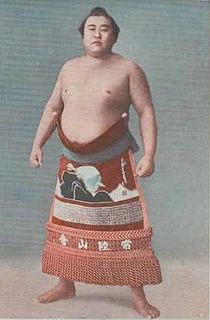 Yūshō is the term for a championship in Japanese. This article focuses on championships in the sport of professional sumo.

The following are the events in professional sumo during the year 2008.

The following are the events in professional sumo during 2005. 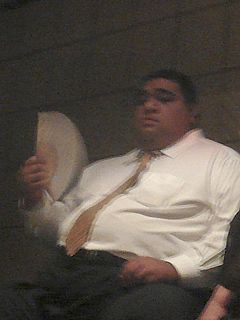 Musashimaru Kōyō is a former sumo wrestler. He made his professional debut in 1989, and reached the top makuuchi division in 1991. After reaching ozeki rank in 1994 his progress seemed to stall, but in 1999 he became the second foreign-born wrestler in history to reach the rank of yokozuna. He won over 700 top division bouts and took twelve top division tournament championships during his career. Musashimaru's sheer 235 kg (518 lb) bulk combined with 1.92 m of height made him a formidable opponent, and he was remarkably consistent and injury-free for most of his career. An amiable personality, his fan base was helped by a surprising facial resemblance to Japanese warrior hero Saigō Takamori. After retiring in 2003, he became an elder of the Japan Sumo Association and founded the Musashigawa stable in 2013.

Dewanishiki Tadao was a sumo wrestler from Tokyo, Japan. His highest rank was sekiwake. He won ten kinboshi or gold stars for defeating yokozuna during his long top division career, which only four wrestlers have bettered. He also won four special prizes. After his retirement he was a coach at Dewanoumi stable.