List of teams and cyclists in the 2014 Tour de France

The 2014 Tour de France was the 101st edition of the race, one of cycling's Grand Tours. The 3,660.5-kilometre (2,274.5 mi) race included 21 stages, starting in Leeds, Yorkshire, United Kingdom, on 5 July and finishing on the Champs-Élysées in Paris on 27 July. The race also visited Belgium for part of a stage. Vincenzo Nibali of the Astana team won the overall general classification by more than seven minutes, the biggest winning margin since 1997. Jean-Christophe Péraud placed second, with Thibaut Pinot (FDJ.fr) third.

In road bicycle racing, a Grand Tour is one of the three major European professional cycling stage races: Giro d'Italia, Tour de France and Vuelta a España. Collectively they are termed the Grand Tours, and all three races are similar in format being three week races with daily stages. They have a special status in the UCI regulations: more points for the UCI World Tour are distributed in Grand Tours than in other races, and they are the only stage races allowed to last longer than 14 days.

Leeds is a city in the United Kingdom, located in the county of West Yorkshire in Northern England, approximately 170 miles north of central London. Leeds has one of the most diverse economies of all the UK's main employment centres and has seen the fastest rate of private-sector jobs growth of any UK city. It also has the highest ratio of private to public sector jobs of all the UK's Core Cities, with 77% of its workforce working in the private sector. Leeds has the third-largest jobs total by local authority area, with 480,000 in employment and self-employment at the beginning of 2015. Leeds is ranked as a High Sufficiency level city by the Globalization and World Cities Research Network. Leeds is the cultural, financial and commercial heart of the West Yorkshire Urban Area. Leeds is served by four universities, and has the fourth largest student population in the country and the country's fourth largest urban economy.

The race was contested by 22 teams. [2] All of the eighteen UCI ProTeams were automatically invited, and obliged, to attend the race. [3] On 14 January 2014, the organiser of the Tour, Amaury Sport Organisation (ASO), announced the four second-tier UCI Professional Continental teams given wildcard invitations: Cofidis, NetApp–Endura, Bretagne–Séché Environnement and IAM Cycling. [4] The team presentation – where the members of each team's roster are introduced in front of the media and local dignitaries – took place at the First Direct Arena in Leeds, United Kingdom, on 3 July, two days before the opening stage held in the city. The riders arrived at the arena by a ceremonial ride from the University of Leeds. The event included performances from Embrace and Opera North in front of an audience of 10,000. [5]

The Amaury Sport Organisation (ASO) is part of the French media group, EPA. It organises sporting events including the Tour de France, Vuelta a España and Paris–Nice professional cycle road races, and the Dakar Rally. In 2008 it organised the Central Europe Rally, a rally raid endurance race in Romania and Hungary.

Cofidis Solutions Crédits is a French professional road bicycle racing team sponsored by a money-lending company, Cofidis. It was started in 1996 by Cyrille Guimard the former manager of Bernard Hinault, Greg LeMond and Laurent Fignon of the Renault-Elf-Gitane team of the 1980s. The team's sponsor has supported the team despite repeated problems such as doping scandals. After it was part of the UCI ProTour for the ProTour's first five seasons, from 2010 on the team competes as a UCI Professional Continental team.

Each squad was allowed a maximum of nine riders, therefore the start list contained a total of 198 riders. [6] Of these, 47 were riding the Tour de France for the first time. [7] The total number of riders that finished the race was 174. [8] The riders came from 34 countries; France, Spain, Italy, Netherlands, Germany, Australia and Belgium all had 10 or more riders in the race. [9] Giant–Shimano's Ji Cheng was the first Chinese rider to participate in the Tour. [10] Riders from eight countries won stages during the race; German riders won the largest number of stages, with seven. [11] The average age of riders in the race was 29.88 years, [12] ranging from the 20-year-old Danny van Poppel to the 42-year-old Jens Voigt, both Trek Factory Racing riders. [13] Voigt, riding in his final year as a professional, equalled Stuart O'Grady's record for most appearances in the Tour with 17. [14] Garmin–Sharp had the highest average age, while Trek Factory Racing had the lowest. [12]

Team Sunweb is a professional German cycling team at UCI WorldTeam level. The team is managed by Iwan Spekenbrink and uses Cervélo bicycles.

Ji Cheng is a Chinese former professional cyclist, who rode professionally between 2006 and 2016 for Purapharm and Team Giant–Alpecin.

Marcel Kittel of Giant–Shimano was the first rider to wear the general classification's yellow jersey after winning stage one. He lost it after the next stage to Vincenzo Nibali (Astana), who won the stage. Nibali held the race lead until the end of the ninth stage, when it was taken by Lotto–Belisol's Tony Gallopin. The yellow jersey returned to Nibali the following stage, and he held it until the conclusion of the race. [15] Second and third respectively were Jean-Christophe Péraud (Ag2r–La Mondiale) and Thibaut Pinot (FDJ.fr). The points classification was won by Peter Sagan of the Cannondale team. [8] Rafał Majka (Tinkoff–Saxo), winner of two mountain stages, won the mountains classification. [16] Pinot was the best young rider and the team classification was won by Ag2r–La Mondiale. Alessandro De Marchi (Cannondale) was given the award for the most combative rider. [8]

Marcel Kittel is a German former racing cyclist, who last rode for UCI WorldTeam Team Katusha–Alpecin. As a junior, he specialised in time trials, even winning a bronze medal in the World Championships for cyclists aged under 23. When he became a professional in 2011, he specialised in bunch sprints, where he usually needed a good leadout in order to win. He has won stages in each of the three Grand Tours. 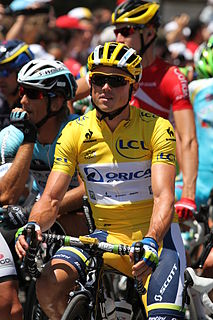 Team Ineos is a British professional cycling team that competes at UCI WorldTeam level. The team is based at the National Cycling Centre in Manchester, England, with a logistics base in Deinze, Belgium. The team is managed by British Cycling's former performance director, Sir Dave Brailsford.

Movistar Team is a professional road bicycle racing team which participates at UCI WorldTeam level and has achieved thirteen general classification (GC) victories in Grand Tours. The title sponsor is the Spanish mobile telephone company Telefónica, with the team riding under the name of the company's brand Movistar.

Katusha–Alpecin is a Swiss road bicycle racing team which competes at UCI WorldTeam level using Canyon bikes. The team was created in 2008 by Igor Makarov within the framework of the previously established Russian Global Cycling Project, which was intended to help cycling in Russia to move to a qualitatively new level. In 2017 the team took an international direction, still supported by Igor Makarov’s company ARETI International Group, clothing company Katusha Sports and German shampoo manufacturer Alpecin. The team has competed as a UCI ProTeam/WorldTour team since 2009. Joaquim Rodríguez, Alexander Kristoff, Daniel Moreno, Simon Špilak, Filippo Pozzato, Luca Paolini, Ilnur Zakarin, and Tony Martin are some of the most successful riders who have been riding for Katusha.

Bora–Hansgrohe is a UCI WorldTeam cycling team established in 2010 with a German license, founded and managed by Ralph Denk. It is sponsored by BORA, German manufacturer, and Hansgrohe, bathroom fittings manufacturer. Its aim is "improving the image of road cycling in Germany".

Arkéa–Samsic is a Professional Continental cycling team based in Rennes, France that participates in UCI Continental Circuits races and UCI World Tour races when receiving a wild card. The team was founded in 2005 and in 2013 the main sponsor became Séché Environnement, a French waste treatment company.