Below is a list of towns and cities in Norway. The Norwegian word for town or city is by. Cities were formerly categorized as kjøpstad (market town) or ladested (small seaport), [1] each with special rights. The special trading rights for cities were abolished in 1857, and the classification was entirely rescinded in 1952 and replaced by the simple classification by.

Because of the new laws, Norway witnessed a rapid rise in the number of cities after 1996. A number of relatively small settlements are now called by, such as Brekstad with 1,828 inhabitants and Kolvereid with 1,448 inhabitants. [lower-alpha 1] Among the cities of today which got this status before 1996, Tvedestrand with 1,983 [lower-alpha 1] inhabitants is the smallest. On another note, the laws of 1996 allowed some settlements which lost their city status in the 1960s to regain it.

Oslo, founded in 1000[ citation needed ], is the largest city and the capital of Norway.

Cities and towns in Norway

Note that in most cases the population listed here is that of the municipality, including other villages, not just the urban centre.

In 2017 the government decided to abolish some of the counties and to merge them with other counties to form larger ones, reducing the number of counties from 19 to 11, to be implemented from 2020. [4]

City or town status since before 1996

City status since after 1996

Sokna is a small village located between Hønefoss and Krøderen in the municipality of Ringerike, in the county of Buskerud, Norway. Its population is 543.

Buskerud is a former county and a current electoral district in Norway, bordering Akershus, Oslo, Oppland, Sogn og Fjordane, Hordaland, Telemark and Vestfold. The region extends from the Oslofjord and Drammensfjorden in the southeast to Hardangervidda mountain range in the northwest. The county administration was in modern times located in Drammen. Buskerud was merged with Akershus and Østfold into the newly created Viken County on 1 January 2020. On the 23 February 2022 Viken County Council voted in a 49 against 38 decision to submit an application to the Norwegian government for a county demerger. 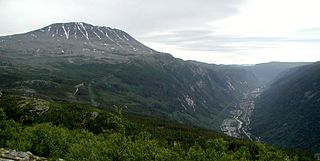 Porsgrunn (help·info) is a city and municipality in Telemark in the county of Vestfold og Telemark in Norway. It is part of the traditional region of Grenland. The administrative centre of the municipality is the city of Porsgrunn. 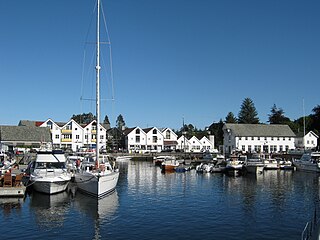 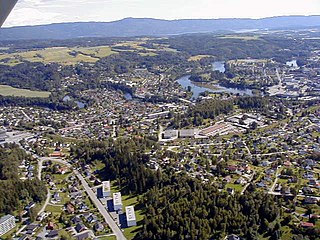 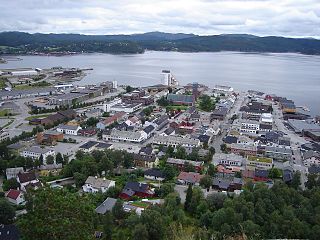 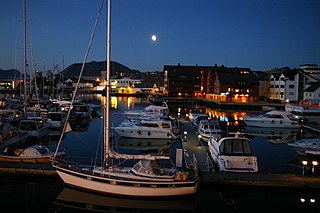 Florø (help·info) is a town and the administrative centre of the municipality of Kinn, Vestland, Norway. The town was founded by royal decree in 1860 as a ladested on the island of Florelandet, located between the Botnafjorden and Solheimsfjorden. Florø is Norway's westernmost town. It is the most western town on the mainland in the Nordic countries.

Sund is a former municipality in the old Hordaland county in Norway. The municipality existed from 1838 until its dissolution in 2020 when it joined Øygarden Municipality. It was located in the traditional district of Midhordland. The administrative centre of the municipality was the village of Skogsvåg. Other larger villages in Sund included Klokkarvik, Tælavåg, Kausland, and Hammarsland. 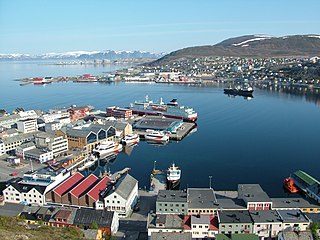 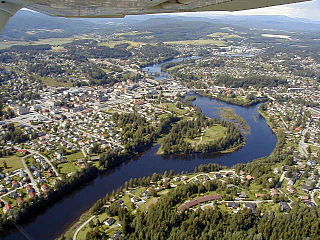 Grenland is a traditional district in the county of Vestfold og Telemark, in the south of Norway. Located in the southeastern part of the county, Grenland is composed of the municipalities Skien, Porsgrunn, Bamble, and Siljan. Sometimes the municipalities Kragerø and Drangedal of the smaller Vestmar region are also considered to be part of the area. The region encompasses 1,794 km2 and has 122,978 inhabitants (2004), which translates as 12% of the area and 64% of the population of Telemark. 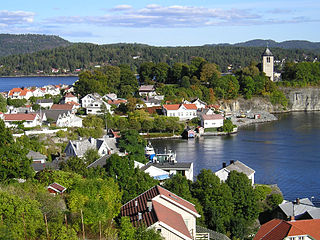 Brevik is a town in Telemark, Norway, with an estimated population of 2,700. Brevik was established as a municipality 1 January 1838, but was merged with Porsgrunn on 1 January 1964. Brevik is regarded as one of the best preserved towns from the sailing ship era. The town is located on the far end of Eidanger peninsula, and was a former export centre for ice and timber. The last shipment of wood to the United Kingdom was around 1960. 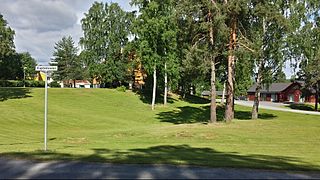 Helgelandsmoen is a village located in Buskerud, Norway.

Norderhov is a former municipality located within Ringerike in Buskerud county, Norway.

Borre is a village in the municipality of Horten, Vestfold county, Norway. The village of Borre had provided the name of the former Borre municipality.

The Ringerike Line is a proposed 40-kilometre (25 mi) extension of the Bergen Line from Jong, Sandvika to Hønefoss, Norway. It would reduce travel from Oslo to Bergen by 60 kilometres (37 mi) and 50 minutes. Currently trains from the Bergen Line to Oslo must run via Drammen on the Randsfjord Line and the Drammen Line, or via Roa on the Roa–Hønefoss Line and the Gjøvik Line. 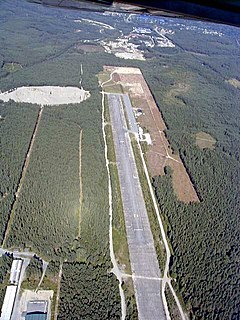 Hønefoss Airport, Eggemoen is a private airport situated at Eggemoen in Ringerike, in Viken county Norway. The airport features a 2,100-meter (6,900 ft) asphalt runway aligned 04/22. The airport is owned by Tronrud Engineering and is part of Eggemoen Aviation & Technology Park. The airport is situated midway between Hønefoss and Jevnaker.

Vestfold og Telemark, lit. Vestfold and Telemark in English, is the southernmost county in Eastern Norway that consists of two distinct and separate traditional regions, the former counties of Telemark and most of Vestfold. The capital is Skien, which is also the county's largest city. While Skien is the capital of the county municipality, the seat of the County Governor is Tønsberg. It borders the counties of Viken, Vestland, Rogaland and Agder.