The Lithuanian Women's Supercup (Lietuvos moterų supertaurė) was a one-off fixture in Lithuanian football played between the A Lyga champions and the winners of the Lithuanian Women's Cup. In 2005 and 2006 Gintra Universitetas won the league and the cup thus the supercup was played against cup runners-up.

Football is popular sport in Lithuania. The former Soviet republic made their entrance as an independent football nation in 1992. In the qualification for the Euro 2004, Lithuania held Germany to a 1-1 draw in Germany and won against Scotland. In the qualification for the Euro 2008 they played away to the 2006 World Cup winners Italy and drew 1-1 as well as beating Romania 3-0 in Lithuania in another shock performance.

The A Lyga is Lithuania's top level women's football league.

The Lithuanian Supercup is an annual football match contested between the champions of the previous A Lyga season and the holders of the Lithuanian Football Cup. It is organised by and named after Lithuanian Football Federation and played at the beginning of the season. For sponsorship reasons, it is currently also known as the LFF Betsafe Supercup.

Armantas Vitkauskas is a Lithuanian football goalkeeper who plays for Žalgiris Vilnius.

Gintra Universitetas is a Lithuanian women's football club from Šiauliai. It is the team of the local Šiauliai University.

The 2010 A-Lyga was the 18th edition of Lithuania's women's football league. It was won for the 6th year in a row by Gintra-Universitetas Siauliai, which won all 12 games.

Rasa Imanalijeva is a Lithuanian football striker, currently playing for Gintra Universitetas in the A Lyga. She has been the league's top scorer in the 2008, 2009, 2010 and 2011 seasons.

Sonata Vanagaitė is a Lithuanian football striker currently playing in the A Lyga for Gintra Universitetas, with which she has also played the Champions League. She is a member of the Lithuanian national team, for which she scored at 16 two goals in the Euro 2013 qualifying's preliminary round.

Ina Boyko is a Moldovan-Azerbaijani football goalkeeper currently playing for Gintra Universitetas, in Lithuania's A Lyga and the UEFA Women's Champions League.

Ezgi Çağlar is a Turkish women's football goalkeeper currently playing in the Turkish Women's First Football League for Amed SFK in Diyarbakır with jersey number 23. She is member of the Turkey women's national team since 2007. 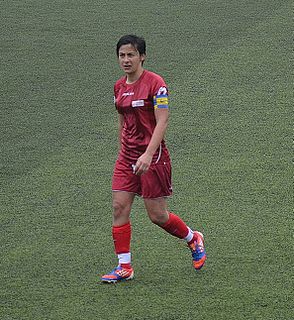 Sevinç Çorlu is a Turkish women's football defender currently playing in the Turkish Women's First Football League for AKonak Belediyespor in Istanbul with jersey number 5. She is member of the Turkey women's national team since 2008. 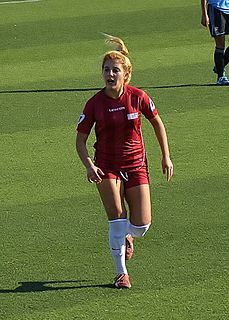 Damla Demirdön is a Turkish women's football midfielder currently playing in the Turkish Women's First Football League for Ataşehir Belediyespor in Istanbul with jersey number 17. She is member of the Turkey women's national team since 2007.

Büşra Ahlatçı is a Turkish women's football midfielder currently playing in the Turkish Women's First Football League for Adana İdmanyurduspor with jersey number 28. She was a member of the Turkey girls' national U-19 and Turkey women's teams.

Koko Ange Mariette Christelle N'Guessan is an Ivorian professional footballer who plays for Primera División club UDG Tenerife. She was part of the Ivory Coast squad for the 2015 FIFA Women's World Cup.

Tetyana "Tanya" Kozyrenko is a Ukrainian footballer, who plays for ALG Spor with jersey number 96 in the Turkish Women's First Football League.