Rot-Weiss Essen is a German association football club based in Essen, North Rhine-Westphalia. The club currently plays in the fourth-tier Regionalliga West, at the Stadion Essen. 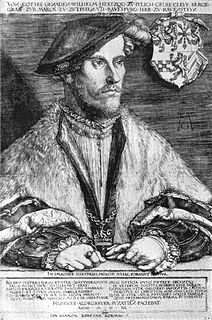 Diether Krebs was a German actor, cabaret artist and comedian.

Jürgen Röber is a German football manager and former player. 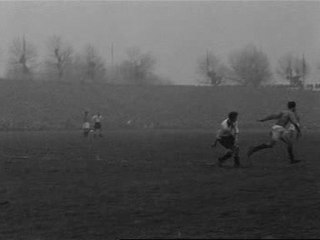 Friedrich "Fritz" Herkenrath was a football goalkeeper for West Germany at the 1958 FIFA World Cup. He earned 21 caps between 1954 and 1958.

The Folkwang University of the Arts is a university for music, theater, dance, design, and academic studies, located in 4 German cities of North Rhine-Westphalia. Since 1927, its traditional main location has been in the former Werden Abbey in Essen in the Ruhr Area, with additional facilities in Duisburg, Bochum, and Dortmund, and, since 2010, at the Zeche Zollverein, a World Heritage Site also in Essen. The Folkwang University is home to the international dance company Folkwang Tanz Studio (FTS). Founded as Folkwangschule, its name was Folkwang Hochschule from 1963 until 2009.

The 1987–88 DFB-Pokal was the 45th season of the annual German football cup competition. It began on 28 August 1987 and ended on 28 May 1988. Eintracht Frankfurt defeated VfL Bochum 1–0 thereby winning the trophy for the fourth time. 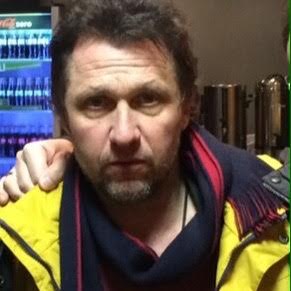 Jürgen 'Kobra' Wegmann is a German former professional football who played as a striker.

Jürgen Peter Vogel is a German actor, screenwriter, film producer and singer. One of the most successful character actors in German cinema, he first broke out in 1992 with his role in Little Sharks.

The Bundesliga scandal refers to the malicious, for-profit manipulation of games in the 1970–71 German football championship season.

Jürgen Rynio is a retired German footballer who played as a goalkeeper. Born in Gelsenkirchen, Rynio played in the Bundesliga for Karlsruher SC, 1. FC Nürnberg, Borussia Dortmund, Rot-Weiss Essen, FC St. Pauli and Hannover 96, appearing in over 450 games in the top two tiers of German football during his career.

Emperor's Ball (German:Kaiserball) is a 1956 Austrian drama film directed by Franz Antel and starring Sonja Ziemann, Rudolf Prack and Hannelore Bollmann. The film is part of a cycle of films set during the old Austro-Hungarian Empire. It was shot in agfacolor with sets designed by Otto Pischinger.

La Femme d'une nuit is a 1931 French drama film directed by Marcel L'Herbier. It was made simultaneously with Italian and German versions of the same story, which were however not only in different languages but in different genres.

The Gau Essen was an administrative division of Nazi Germany from 1933 to 1945 in the northern parts of the Prussian Rhine Province. Before that, from 1928 to 1933, it was the regional subdivision of the Nazi Party in that area. 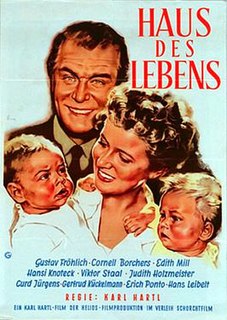 House of Life is a 1952 West German drama film directed by Karl Hartl and starring Gustav Fröhlich, Cornell Borchers and Edith Mill. The film's setting is a maternity hospital, portraying the stories of various staff and patients.

Knall and Fall as Imposters is a 1952 Austrian-German comedy film directed by Ulrich Bettac and Hubert Marischka and starring Hans Richter, Rudolf Carl and Curd Jürgens. It was followed by a 1953 sequel Knall and Fall as Detectives. 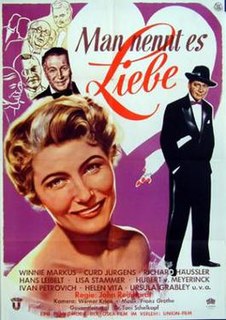 They Call It Love is a 1953 West German comedy film directed by John Reinhardt and starring Winnie Markus, Curd Jürgens and Richard Häussler.