Liyel Imoke hails from Agbo tribe in Abi Local Government Area of Cross River State. [2] His father, Dr. Samuel Imoke was a medical doctor who became a cabinet minister and leader of Parliament in the former Eastern Region. Liyel Imoke was born on 10 July 1961 at Ibadan in the then Western Region of Nigeria. [1]

Liyel Imoke attended Mary Knoll College, Okuku, Ogoja and then the Federal Government College Enugu (1973–1977) for his secondary education. He obtained a bachelor's degree in International Relations and Economics at the University of Maryland in the United States in 1982.

He then studied law at the University of Buckingham, England, gaining an LLB degree in 1985, and then studied at the American University in Washington, D.C. where he gained a master's degree in Law. He completed his legal education at the Nigerian Law School, Lagos, in 1988. [1]

In 1992, Liyel Imoke was elected a Senator of the Federal Republic of Nigeria at the age of 30 during the Ibrahim Babangida transition government. His term ended with the dissolution of the government in November 1993 by the military regime headed by General Sani Abacha. [1]

Between 1993 and 1999, he was a Managing Consultant at Telsat Communications, Lagos; Executive Chairman of Value Mart Nigeria, Lagos, and Executive Director of Trident Petroleum and Gas, Lagos. [3]

In 1999, he was appointed a Special Adviser on Public Utilities by President Olusegun Obasanjo. He was Executive Chairman of the Special Board charged with winding down the Oil Minerals Producing Areas Development Commission. [1] He was Chairman of Technical Board of the National Electric Power Authority. [4]

Minister of Power and Steel

In July 2003, Liyel Imoke was appointed Federal Minister of Power and Steel, and for a while was also Federal Minister of Education. Imoke implemented reforms laid out in the Nigerian Power Sector Reform Act of 2005, leading to establishment of the Nigerian Electricity Regulatory Commission (NERC), the Rural Electrification Agency (REA) and the unbundling of the National Electric Power Authority (NEPA). [1]

In 2008, the House of Representatives set up a panel to look into how $16 billion for the National Integrated Power Project (NIPP) was disbursed, asking for testimony by Liyel Imoke and Olusegun Agagu, who had also served as Minister of Power and Steel. The panel cleared Imoke of wrongdoing. [5] In July 2008 the Economic and Financial Crimes Commission said that Liyel Imoke was under investigation. Imoke had lost his constitutional immunity after his election as governor of Cross River state had been annulled. [6]

In April 2007, Liyel Imoke successfully ran for governor of Cross River State under the People's Democratic Party (PDP) platform. He took office on 29 May 2007. The election was annulled by an Election Appeal Tribunal in July 2008. He was elected again in a re-run on 23 August 2008. He won the 2012 Cross River State gubernatorial election. [7]

Olubukola Abubakar Saraki, MBBS, CON is a Nigerian politician. He was the 13th President of the Senate of Nigeria from 2015 to 2019 and Chair of the 8th Nigeria National Assembly. He was previously the Governor of Kwara State from 2003 to 2011; and was elected to the Senate in 2011, under the Peoples Democratic Party (PDP), representing the Kwara Central Senatorial District, and then re-elected in the 2015 general elections under the platform of the All Progressives Congress (APC).

Peter Otunuya Odili was the third Governor of Rivers State in Nigeria from 29 May 1999 to 29 May 2007. Odili is a member of the former ruling People's Democratic Party (PDP).

Rabi'u Musa Kwankwaso, FNSE, FNIQS is a Nigerian politician who was the Governor of Kano State from 1999 to 2003 and 2011 to 2015. After he lost his re-election in 2003, he was appointed the first Minister of Defence of the Fourth Republic with no prior military background from 2003 to 2007. He was later elected to the Senate in 2015, serving one term under the platform of the All Progressives Congress (APC) representing Kano Central Senatorial District.

Sule Lamido was born on served as Foreign Affairs Minister of Nigeria from 1999 to 2003. He was elected governor of Jigawa State in April 2007. He is a member of the former ruling People's Democratic Party (PDP). He ran successfully for reelection on 26 April 2011. In 2015 he and his sons were put on trial for embezzling state fund by the EFCC. 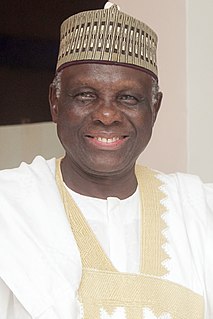 Farida Mzamber Waziri is a Nigerian technocrat, law enforcement officer and former executive chairperson of the Nigerian Economic and Financial Crimes Commission (EFCC) She succeeded Nuhu Ribadu in this post.

Nuhu Aliyu Labbo is a Nigerian politician elected to the Senate for the Niger North constituency of Niger State in 1999 and was re-elected in 2003 and 2007.

Chief Olabode Ibiyinka George was a Nigerian politician who became Military Governor of Ondo State, and later Chairman of the Nigerian Ports Authority, then national vice-chairman in the southwest zone of the People’s Democratic Party (PDP).

Chief Godswill Obot Akpabio, CON, is a Nigerian lawyer and politician. He is the current Minister of Niger Delta, a former Senator of the Federal Republic of Nigeria and the Senate's Minority Leader. He also served as Governor of Akwa Ibom State of Nigeria from May 29, 2007 to May 29, 2015.

Clement David Ebri is a Nigerian politician who was elected on the NRC platform as Governor of Cross River State, Nigeria between January 1992 and November 17, 1993 during the Nigerian Third Republic, leaving office after the military coup that brought General Sani Abacha to power. He was a strong supporter of General Ibrahim Babangida, who had initiated the short-lived third republic.

Haliru Mohammed Bello is a Nigerian politician. He was trained in veterinary medicine. He held various administrative positions under the military governments before 1999. He was Minister of Communications from June 2001 to May 2003. After he left office, he was indicted in a bribery scandal involving the German telecom company Siemens AG.

Chief (Dr.) Solomon Daushep Lar (Walin Langtang) was a Nigerian politician who has held various offices at the National level for over 50 years. He was a member of the first national parliament when Nigeria gained independence in 1960. He was elected governor of Plateau State on the Nigerian People's Party (NPP) platform during the Nigerian Second Republic, holding office from October 1979 until the Military coup of 31 December 1983 that brought General Muhammadu Buhari to power. Later, he was founding chairman of the People's Democratic Party (PDP).

Chief Alabo Tonye Graham-Douglas was appointed Nigerian Minister of Youth, Sports and Culture in 1989, then Minister of Aviation in General Ibrahim Babangida's cabinet. In 1999, he was appointed Minister of Labour and Productivity, and in 2000, Minister of Tourism in the Olusegun Obasanjo cabinet, leaving office in January 2001. He remains a force in Rivers State politics.

Omololu Samuel Meroyi was elected Senator for the Ondo South constituency of Ondo State, Nigeria at the start of the Nigerian Fourth Republic, running on the Alliance for Democracy (AD) platform. He took office on 29 May 1999.

The Calabar Free Trade Zone (CFTZ) is an area just north of the port of Calabar, Cross River State, Nigeria that is occupied by companies engaged in manufacturing, trading, provision of services and oil and gas related activities. These companies benefit from special taxation rules and duty-free imports.

This article is about the particular significance of the year 2008 to Nigeria and its people.

Adedoyin Ajibike Okupe, better known as Dr. Doyin Okupe, is a Nigerian physician and politician who co-founded Royal Cross Medical Centre and was the National Publicity Secretary of National Republican Convention (NRC). He was once detained under General Sani Abacha, and subsequently disqualified from participating in United Nigeria Congress Party (UNCP) primaries; later on, he was a governorship aspirant of the People's Democratic Party (PDP) in Ogun State.

Gershom Henry Bassey is a Nigerian politician and businessman. He is the senator representing Cross River South Senatorial District in the Nigerian Senate. He is a senator of the 8th and 9th National Assembly in Nigeria respectively.