The core business of the Ljubljana stock exchange is to ensure a secure, efficient and successful operation of the regulated segment of the Slovene capital market, in accordance with the law and other regulations.

Additional activities include the services for trading members and listed companies.

The existing Ljubljana Stock Exchange was established in 1989. However, brokerage in Slovenia has a much longer tradition: the first stock exchange in Ljubljana existed as early as in the period between 1924 and 1942. Unfortunately, during the Second World War the trading on the old exchange was suspended, and after the war also officially banned by a decree by the new communist regime which replaced monarchy in Yugoslavia. Slovenians were thus left without a stock exchange for almost half a century. Then in the 1989 the Ljubljana Stock Exchange was officially established. In the year 1993 LJSE introduced electronic trading on BTS - on complex Stock Exchange Information System three times a week, floor trading still remained on Tuesdays and Thursdays. The new system of electronic information dissemination - SEOnet was launched in year 2002. Three years later LJSE introduced the elite segment of the official market, listing Slovenia's prime companies, and named it Prime Market. In the middle of the year 2008 the first regional road-show of SE Europe, organized by all 8 exchanges from the region, was held in Zagreb. In the same year Vienna Stock Exchange became the new majority owner of the LJSE (it acquired an 83.34% share). Year 2009 was crucial for establishment of "CEE Stock Exchange Group" (CEESEG), which at the time comprised the Vienna Stock Exchange and the stock exchanges of Budapest, Ljubljana and Prague. In the year 2010 there were a lot of important events: The SBITOP Index as the first genuine LJSE blue-chip index became a benchmark index, LJSE launched INFO HRAMBA - the new information system for the central storage of regulated information of all issuers on the LJSE, LJSE published the Slovene Capital Market Development Strategy, which had been prepared in cooperation with the capital market participants and was the answer to the changed economic and financial circumstances in the previous two years, LJSE proposed the introduction of 'P accounts' in the third pension pillar, LJSE started trading on the international trading system Xetra® and thus became integrated into the international capital market. As of July 2015 Ljubljana Stock Exchange is owned by Zagreb Stock Exchange. On 22 February 2016, the Ljubljana Stock Exchange, along with the Belgrade Stock Exchange, decided to join SEE Link, and EBRD-sponsored regional network for trading securities. [1]

Trading on the Ljubljana Stock Exchange operates through an electronic order book in the Xetra® trading system. Xetra® trading system was implemented at the Ljubljana Stock Exchange on December 6, 2010. The Slovene capital market is now more easily accessible, internationally comparable and competitive market. The exchange has pre-market sessions from 08:00am to 09:30am and normal trading sessions from 09:30am to 01:00pm on all days of the week except Saturdays, Sundays and holidays declared by the Exchange in advance. On the basis of meeting the LJSE liquidity criteria, securities are traded in the continuous or auction trading methods.

SBI TOP is the first genuine LJSE blue-chip index and serves as the Slovene capital market benchmark index. It measures the performance of the most liquid and highly capitalized stocks on the LJSE Market. It is designed as a tradable index. Due to the liquidity of the constituents, it is intended to serve as underlying for index-linked financial instruments.

The DAX is a blue chip stock market index consisting of the 30 major German companies trading on the Frankfurt Stock Exchange. Prices are taken from the Xetra trading venue. According to Deutsche Börse, the operator of Xetra, DAX measures the performance of the Prime Standard’s 30 largest German companies in terms of order book volume and market capitalization. It is the equivalent of the FTSE 100 and the Dow Jones Industrial Average, and because of its small selection it does not necessarily represent the vitality of the economy as a whole.

A market maker or liquidity provider is a company or an individual that quotes both a buy and a sell price in a financial instrument or commodity held in inventory, hoping to make a profit on the bid–ask spread, or turn. The U.S. Securities and Exchange Commission defines a "market maker" as a firm that stands ready to buy and sell stock on a regular and continuous basis at a publicly quoted price.

Euronext Dublin is Ireland's main stock exchange, and has been in existence since 1793. 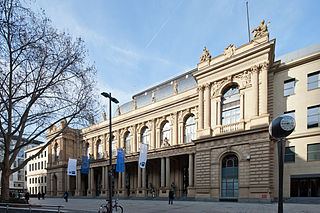 The Frankfurt Stock Exchange is the world's 12th largest stock exchange by market capitalization. It has operations from 9:00 am – 5:30 pm (UTC+02:00).

Oslo Stock Exchange is a stock exchange within the Nordic countries and offers Norway’s only regulated markets for securities trading today. The stock exchange offers a full product range including equities, derivatives and fixed income instruments.

An electronic communication network (ECN) is a type of computerized forum or network that facilitates the trading of financial products outside traditional stock exchanges. An ECN is generally an electronic system that widely disseminates orders entered by market makers to third parties and permits the orders to be executed against in whole or in part. The primary products that are traded on ECNs are stocks and currencies. ECNs are generally passive computer-driven networks that internally match limit orders and charge a very small per share transaction fee.

Xetra is a trading venue operated by Frankfurter Wertpapierbörse based in Frankfurt, Germany.

The Bucharest Stock Exchange (BVB) is the stock exchange of Romania located in Bucharest. In 2019, the capitalization of BVB increased 23.4% compared to the previous year, to the value of EUR 37.8 billion. At the end of 2019 there were 83 companies listed on the BVB. 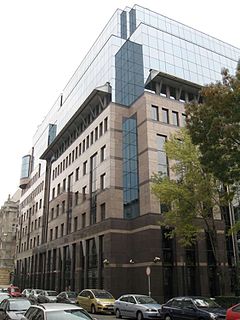 Budapest Stock Exchange(BSE) is the 2nd largest stock exchange in Central and Eastern Europe by market capitalization and liquidity. It is located at 7 Liberty Square, Budapest, Hungary, in the central business district of the city, known as District V. Previously, from 1864, during the Austro-Hungarian Empire it was located in the Budapest Stock Exchange Palace building, until a large trading floor was necessary. The exchange is controlled by listed issuers, by Hungarian private investors and by the central bank. The BSE is member of the World Federation of Exchanges and the Federation of European Securities Exchanges.

Algorithmic trading is a method of executing orders using automated pre-programmed trading instructions accounting for variables such as time, price, and volume. This type of trading attempts to leverage the speed and computational resources of computers relative to human traders. In the twenty-first century, algorithmic trading has been gaining traction with both retail and institutional traders. It is widely used by investment banks, pension funds, mutual funds, and hedge funds that may need to spread out the execution of a larger order or perform trades too fast for human traders to react to. A study in 2019 showed that around 92% of trading in the Forex market was performed by trading algorithms rather than humans.

Bolsa de Madrid is the largest and most international of Spain's four regional stock exchanges that trade shares and convertible bonds and fixed income securities, and both government and private-sector debt. Bolsa de Madrid is owned by Bolsas y Mercados Españoles.

Euronext Paris is France's securities market, formerly known as the Paris Bourse, which merged with the Amsterdam, Lisbon, and Brussels exchanges in September 2000 to form Euronext NV, which is the second largest exchange in Europe behind the United Kingdom's London Stock Exchange Group.

The Muscat Securities Market is the only stock exchange in Oman. It was established by the Royal Decree (53/88) issued on 21 June 1988, to regulate and control the Omani securities market and to participate, effectively, with other organizations for setting up the infrastructure of the Sultanate's financial sector.

The Malta Stock Exchange, originally known as the Casino della Borsa, is the stock exchange of the island nation of Malta. Since being set up in 1992, the Exchange has been key to the raising of capital for the private sector through the issue of corporate bonds and equity while virtually all the national debt of Government of Malta has been issued in the form of Malta Government bonds and treasury bills that are listed and traded on the secondary market.

An exchange-traded note (ETN) is a senior, unsecured, unsubordinated debt security issued by an underwriting bank. Similar to other debt securities, ETNs have a maturity date and are backed only by the credit of the issuer. 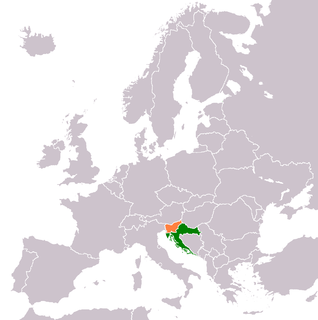 The PSI-20 is a benchmark stock market index of companies that trade on Euronext Lisbon, the main stock exchange of Portugal. The index tracks the prices of the twenty listings with the largest market capitalisation and share turnover in the PSI Geral, the general stock market of the Lisbon exchange. It is one of the main national indices of the pan-European stock exchange group Euronext alongside Brussels' BEL20, Paris's CAC 40 and Amsterdam's AEX.