Lloyd Stowell Shapley ( /ˈʃæpli/ ; June 2, 1923 – March 12, 2016) was an American mathematician and Nobel Prize-winning economist. He contributed to the fields of mathematical economics and especially game theory. Shapley is generally considered one of the most important contributors to the development of game theory since the work of von Neumann and Morgenstern. [3] With Alvin E. Roth, Shapley won the 2012 Nobel Memorial Prize in Economic Sciences "for the theory of stable allocations and the practice of market design." [4] [5]

Lloyd Shapley was born on June 2, 1923, in Cambridge, Massachusetts, one of the sons of astronomers Harlow Shapley and Martha Betz Shapley, both from Missouri. [6] He attended Phillips Exeter Academy and was a student at Harvard when he was drafted in 1943. He served in the United States Army Air Corps in Chengdu, China and received the Bronze Star decoration for breaking the Soviet weather code. [7]

After the war, Shapley returned to Harvard and graduated with an A.B. in mathematics in 1948. After working for one year at the RAND Corporation, he went to Princeton University where he received a Ph.D. in 1953 [8] based on the thesis "Additive and non-additive set functions" [2] . [1] His thesis and post-doctoral work introduced the Shapley value and the core solution in game theory. Shapley defined game theory as "a mathematical study of conflict and cooperation." After graduating, he remained at Princeton for a short time before going back to the RAND corporation from 1954 to 1981. In 1950, while a graduate student, Shapley invented the board game So Long Sucker , along with Mel Hausner, John Forbes Nash, and Martin Shubik. [9] Israeli economist Robert Aumann said Shapley was "the greatest game theorist of all time." [10]

From 1981 until his death, Shapley was a professor at the University of California, Los Angeles (UCLA), serving at the time of his death as a professor emeritus there, affiliated with the Mathematics and Economics departments. He died on March 12, 2016, in Tucson, Arizona, after suffering from a broken hip, at the age of 92. [4]

Shapley was an expert Kriegspiel player, and an avid baseball fan. [10]

Along with the Shapley value, stochastic games, the Bondareva–Shapley theorem (which implies that convex games have non-empty cores), the Shapley–Shubik power index (for weighted or block voting power), the Gale–Shapley algorithm for the stable marriage problem, the concept of a potential game (with Dov Monderer), the Aumann–Shapley pricing, the Harsanyi–Shapley solution, the Snow–Shapley theorem for matrix games, and the Shapley–Folkman lemma & theorem bear his name. [11] According to The Economist , Shapley "may have thought of himself as a mathematician, but he cannot avoid being remembered for his huge contributions to economics". [12] The American Economic Association noted that Shapley was "one of the giants of game theory and economic theory". [11]

Besides, his early work with R. N. Snow and Samuel Karlin on matrix games was so complete that little has been added since. He has been instrumental in the development of utility theory, and it was he who laid much of the groundwork for the solution of the problem of the existence of Von Neumann–Morgenstern stable sets. His work with M. Maschler and B. Peleg on the kernel and the nucleolus, and his work with Robert Aumann on non-atomic games and on long-term competition have all appeared in economic theory. [13]

Shapley argued with his sons about whether he should accept the Nobel Prize at all. He opined that his father, the astronomer Harlow Shapley, deserved it more. His sons persuaded him to accept it and accompanied him to Stockholm. [14]

Game theory is the study of mathematical models of strategic interactions among rational decision-makers. It has applications in all fields of social science, as well as in logic, systems science and computer science. Originally, it addressed zero-sum games, in which each participant's gains or losses are exactly balanced by those of other participants. In the 21st century, game theory applies to a wide range of behavioral relations, and is now an umbrella term for the science of logical decision making in humans, animals, and computers.

Theory of Games and Economic Behavior, published in 1944 by Princeton University Press, is a book by mathematician John von Neumann and economist Oskar Morgenstern which is considered the groundbreaking text that created the interdisciplinary research field of game theory. In the introduction of its 60th anniversary commemorative edition from the Princeton University Press, the book is described as "the classic work upon which modern-day game theory is based."

Oskar Morgenstern was a German-American economist. In collaboration with mathematician John von Neumann, he founded the mathematical field of game theory and its application to economics.

Hobart Peyton Young is an American game theorist and economist known for his contributions to evolutionary game theory and its application to the study of institutional and technological change, as well as the theory of learning in games. He is currently centennial professor at the London School of Economics, James Meade Professor of Economics Emeritus at the University of Oxford, professorial fellow at Nuffield College Oxford, and research principal at the Office of Financial Research at the U.S. Department of the Treasury. 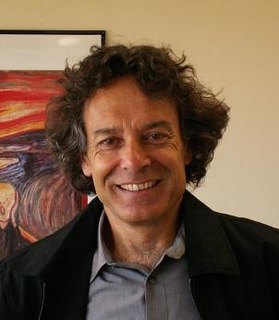 Shapley is a surname that might refer to one of the following:

The Game Theory Society (GTS) is a society for the promotion of research, teaching and application of game theory. It was founded in 1999 by Ehud Kalai and Robert Aumann and is registered in the Netherlands.

Stable Marriage and Its Relation to Other Combinatorial Problems: An Introduction to the Mathematical Analysis of Algorithms, Donald E. Knuth, American Mathematical Society, 1997 (English Translation.)