Its name is derived from the Russian words for 'forehead' (lob) and 'place' (Mesto). In Old Russian lob meant 'a steep river bank'. The platform, believed to have been constructed in brick in the 1530s, was first mentioned in 1547, when Ivan the Terrible addressed the Muscovites from there. Subsequently, it was primarily used for announcing the tsar's ukazes and for religious ceremonies. Despite a common misconception, [1] the circular platform itself was never a place for executions. Sometimes scaffolds were placed by it, but usually public executions were carried out at Vasilevsky Spusk behind St. Basil's Cathedral.

In the Russian Empire, during Holy Week, the Palm Sunday procession called "donkey walk" would end at the Lobnoye Mesto where a depiction of Calvary had been erected. The Tsar himself, on foot to show humility, would lead the Patriarch of Moscow, who was seated on a donkey, in a procession from the city gates to Red Square.

The nearby Monument to Minin and Pozharsky commemorates the events of 1612, when Prince Pozharsky ascended the Lobnoye Mesto to pronounce Moscow free from Polish occupation. In 1786, the architect Matvei Kazakov had the Lobnoye Mesto rebuilt in white stone while keeping its original location and proportions.

The place of execution is opposite the Spasskaya Tower near the Intercession Cathedral and is a circular in plan stone pavement 13 m in diameter and 1 m high with a stone parapet. Initially, the Place of execution was made of brick but in 1599, during the reign of Boris Godunov, it was rebuilt in stone and surrounded by a lattice. At the same time, Tsar Cannon was installed nearby on a wooden gun carriage. [2] Images of Tsar Cannon are also documented in the engravings and drawings of seventeenth-century European travellers. The Lobnoye Mesto acquired its present appearance after the restoration of 1786. [3] 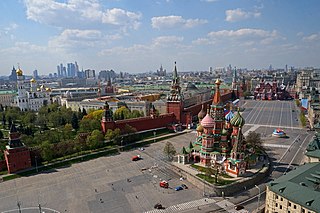 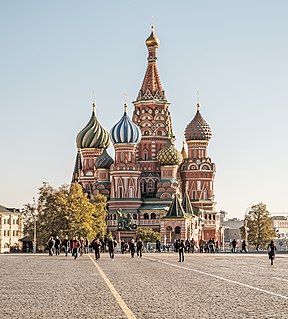 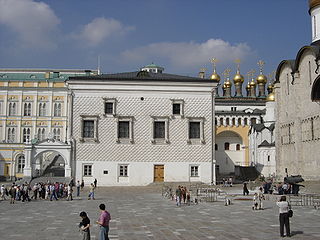 Dmitry Mikhaylovich Pozharsky was a Russian prince known for his military leadership during the Polish–Muscovite War from 1611 to 1612. Pozharsky formed the Second Volunteer Army with Kuzma Minin in Nizhny Novgorod against the Polish–Lithuanian Commonwealth's occupation of Russia during the Time of Troubles, resulting in Polish withdrawal after Russian victory at the Battle of Moscow in 1612. Pozharsky received the unprecedented title of Saviour of the Fatherland from Mikhail I of Russia, becoming a folk hero in Russian culture and honored in the Monument to Minin and Pozharsky in Moscow's Red Square.

The Red Porch or Red Staircase, decorated with stone lions, leads into the Palace of Facets in the Kremlin, Moscow. 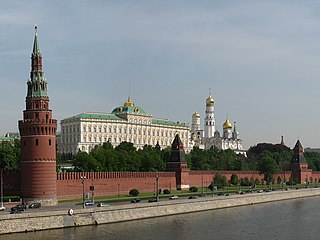 The Moscow Kremlin Wall is a defensive wall that surrounds the Moscow Kremlin, recognisable by the characteristic notches and its Kremlin towers. The original walls were likely a simple wooden fence with guard towers built in 1156. The Kremlin walls, like many cathedrals in the Kremlin, were built by Italian architects.

Hermogenes, or Germogen was the Patriarch of Moscow and all Russia from 1606. It was he who inspired the popular uprising that put an end to the Time of Troubles. Hermogenes was glorified by the Russian Orthodox Church in 1913.

The Motorins, also spelled Matorins were a famous Russian family of bellfounders. 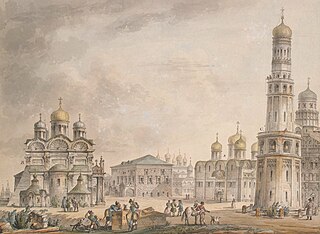 Kazan Cathedral, formally known as the "Cathedral of Our Lady of Kazan", is a Russian Orthodox church located on the northwest corner of Red Square in Moscow, Russia. The current building is a reconstruction of the original church, which was destroyed at the direction of then General Secretary of the Central Committee of the Communist Party of the Soviet Union, Joseph Stalin, in 1936.

Resurrection Gate is the only existing gate of the Kitai-gorod in Moscow. It connects the north-western end of Red Square with Manege Square and gives its name to nearby Voskresenskaya Square. The gate adjoins the ornate building of the Moscow City Hall to the east and the State Historical Museum to the west. Just in front of the chapel is a bronze plaque marking kilometre zero of the Russian highway system. 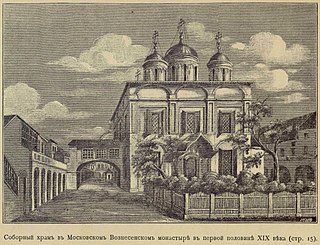 Ascension Convent, known as the Starodevichy Convent or Old Maidens' Convent until 1817, was an Orthodox nunnery in the Moscow Kremlin which contained the burials of grand princesses, tsarinas, and other noble ladies from the Muscovite royal court.

Church of All Saints na Kulichkakh is one of the oldest churches in Moscow, located at 2 Slavyanskaya Square. A notable feature of the church is its leaning bell-tower. 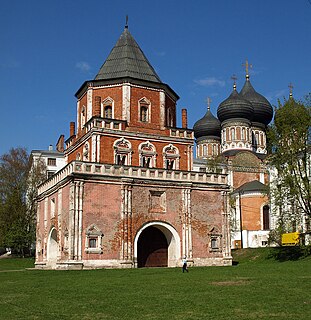 The donkey walk is a Russian Orthodox Palm Sunday ritual re-enactment of Jesus Christ's entry into Jerusalem. The best known historical donkey walk was practised in Moscow from 1558 until 1693. The Metropolitan and later Patriarch of Moscow, representing Jesus Christ, rode on a donkey, while the Tsar of Russia humbly led the donkey on foot. 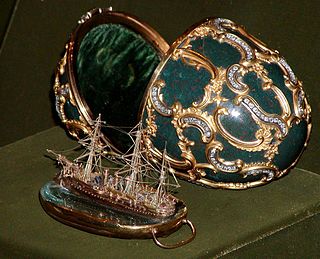