Local councils (plural: מוֹעָצוֹת מְקוֹמִיּוֹת‎Mo'atzot Mekomiot [1] / singular: מוֹעָצָה מְקוֹמִית‎Mo'atza Mekomit [2] ) are one of the three types of local government found in Israel, the other two being cities and regional councils. There are 124 local councils in Israel. [3]

Local councils should not be confused with local committees, which are lower-level administrative entities.

Local council status is determined by passing a minimum threshold, enough to justify operations as independent municipal units, although not large enough to be declared a city. [4] [5] In general this applies to all settlements of over 2,000 people. [5]

The Israeli Interior Minister has the authority of deciding whether a locality is fit to become a municipal council (a city). The minister is expected to listen to the wishes of the residents of the locality in question, who may wish the locality to remain a local council even after achieving the requirements for a city (e.g., Ramat HaSharon, which did not become a city until 2002 due to its residents wanting to preserve its image as a small town), or a part of a regional council despite having achieved the criteria for a local one. Local councils also have an important role in town planning. [4]

The Union of Local Authorities in Israel (ULAI) is the umbrella organization of local councils in Israel. The union represents the local councils vis a vis the national government. ULAI was established in 1938, under the British Mandate, as the League of Local Councils. [6]

Mateh Binyamin Regional Council is a regional council governing 46 Israeli settlements and outposts in the West Bank. The council's jurisdiction is from the Jordan valley in the east to the Samarian foothills in the west, and from the Shiloh river in the north to the Jerusalem Mountains in the south.

Regional councils are one of the three types of Israel's local government entities, with the other two being cities and local councils. As of 2019, there were 54 regional councils, usually responsible for governing a number of settlements spread across rural areas. Regional councils include representation of anywhere between 3 and 54 communities, usually spread over a relatively large area within geographical vicinity of each other.

The Shomron Regional Council is an Israeli regional council in the northern West Bank. It provides municipal services for the 35 Israeli Settlements in the Samarian hills within its jurisdiction with a total population of about 23,600 people. The main offices are located in the Barkan Industrial Park. The Council's logo is inscribed with Biblical words from Jeremiah 31:5: "Again You will plant vineyards on the hills of Samaria," reflecting the region's wine industry. 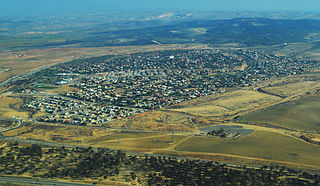 Lehavim is an affluent village in southern Israel. Founded in 1983 and located in the northern Negev around 15 km north of Beersheba, it is a local council. In 2019 it had a population of 6,415.

Shoham is a town in the Central District of Israel. The name relates to one of the 12 stones on the Hoshen, the sacred breastplate worn by a Jewish high priest, similar to other nearby towns: Nofekh, Bareket, Leshem and Ahlama. As of 2019, Shoham had a population of 21,045. Its jurisdiction is 5,889 dunams (~5.9 km2).

Ma'ale Efrayim is a secular Israeli settlement and local council located along the eastern slopes of the Samarian mountains in the Jordan Valley, within the West Bank. It was founded in 1978 and named after the Biblical tribe of Ephraim. The settlement's municipal status was upgraded to local council in 1981. In 2019 it had a population of 1,260. 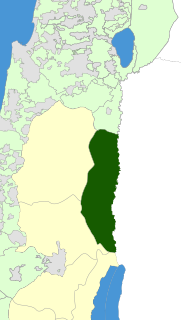 Bik'at HaYarden Regional Council, also Aravot HaYarden is a regional council covering 21 Israeli settlements in the Jordan Valley in the West Bank. The municipal territory of the council reaches from Mehola in the north, near the Beit She'an Valley, to Jericho in the south.

The Mateh Asher Regional Council is a regional council in the western Galilee of northern Israel. It is named after the Tribe of Asher which had been allotted the region in antiquity according to the Book of Joshua (19:24–31). It was founded in 1982 as a merger of three regional councils: Ga'aton, Na'aman and Sulam Tzor. The council's offices are located on Highway 4, between Regba and Lohamei HaGeta'ot.

Abu Basma Regional Council was a regional council operating in 2003-2012 and covering several Bedouin villages in the northwestern Negev desert of Israel. Following the Minister of Interior decision on November 5, 2012 it was split into two newly created bodies: Neve Midbar Regional Council and al-Kasom Regional Council.

Be'er Tuvia Regional Council, is a regional council in the southern Coastal Plain region in Israel. 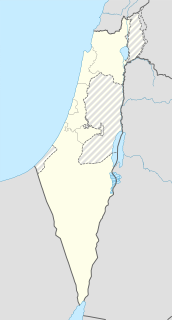 Hof HaSharon Regional Council, is a regional council in the Central and Tel Aviv districts of Israel. It is located on the coastline in the Sharon area between Netanya and Herzliya. 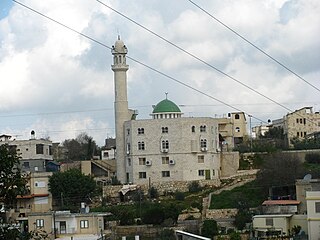 Basmat Tab'un is a Bedouin town in the Northern District of Israel. In 2019 it had a population of 7,916.

Eshhar is a community settlement in northern Israel. Located in the Galilee to the south of Karmiel and north of Sakhnin, it falls under the jurisdiction of Misgav Regional Council. In 2019 it had a population of 965. It is adjacent to the Bedouin village of Arab al-Na'im, with which it shares an access road.

Kfar Adumim is a mixed religious-secular Israeli settlement in the West Bank. It is located in the Judean Desert, on the southern bank of Wadi Qelt, about 2 miles northeast of the town Ma'ale Adumim. It is at 367 meters above sea level. It is organized as a community settlement and falls under the jurisdiction of Mateh Binyamin Regional Council. In 2019 it had a population of 4,674. The Israel Central Bureau of Statistics counts the populations of nearby settlements Alon and Nofei Prat as part of the population of Kfar Adumim.