Locks on the Canal du Midi

There are 91 working locks on the Canal du Midi along its 240-kilometre (150 mi) course from the Bassin du Thau on the Mediterranean coast to the junction with the Canal lateral a la Garonne in Toulouse. There are a further 13 locks on the 37-kilometre (23 mi) La Nouvelle branch which runs through Narbonne to the Mediterranean at Port-la-Nouvelle. [1] The locks are all under the management of the French navigation authority, Voies navigables de France.

The Canal du Midi was built between 1666 and 1681 by Pierre-Paul Riquet to provide an inland water route through Southern France between the Atlantic at Bordeaux and the Mediterranean at Sète via the Garonne. The first design for the locks on the canal was a rectangular shape however due to a collapse of a side-wall early in the building program (exactly which lock is not recorded), Riquet modified his plans and rebuilt both existing and new locks with an ovoid chamber. They were typically 11m wide at the midpoint and 6m at the gates with an overall length of 30.5m. [1] Riquet also restricted the maximum rise to 2.9m so whereas previously he would have built one deep lock he instead used intermediate gates creating double, triple and sometimes quadruple chambers. During the Canal du Midi modernisation program of the 1970s several of these multiple chambers were converted into single "deep" locks with concrete side walls.

The lock gates were originally made of oak in the traditional mitre pattern with balance beams and each gate had a single large wooden sluice drawn up by a vertical screw. [1] The introduction of electric and hydraulic systems for both the lifting of the sluices and the opening of the gates has seen the removal of the balance beams and modern gates are of metal construction.

At each lock there is a double-fronted two-storey lock keeper's house upon which is fixed either a cast iron or a masonry sign showing the name of the lock and the name and distance to the adjacent locks in each direction. The locks are still operated by lock keepers and passage is only possible when they are in attendance however on La Nouvelle branch operation by boaters is allowed. The locks are open every day except 1 January, 11 November and 25 December, from 08:00 until 17:30 out of season and 08:00 until 19:00 in the summer peak; all locks are closed 12:30 – 13:30 for lunch. [2]

At its western end, Toulouse, the canal is at an altitude of 132 metres (433 ft) and climbs to 193 metres (633 ft) at its summit level between Ocean Lock and Mediterranee Lock west of Castelnaudary before dropping down to sea level at Sète. [3]

The graph shows the profile of the Canal du Midi from Toulouse (1), through the summit of the canal at Seuil de Naurouze (2), Castelnaudary (3), then Carcassonne (4) and Trèbes (5). The channel continues to Béziers just after Fonsérannes Lock (6), and then on to Agde (7) before flowing in to the Bassin de Thau at Sète (8).

The following list numbers the locks from the Canal lateral a la Garonne in the west to the Bassin du Thau in the east. Staircase locks are listed as a single entity but the number of individual chambers in the flight is noted. Travelling west to east from Toulouse to Sète the locks numbered 1–18 are ascending and 19–86 are descending. [B] Castanet lock is the first lock with an elliptical chamber, as Riquet realised it was the best fit solution due to mechanical stress from surrounding areas. [5]

A Lock numbers are as given in the appendix of the 1994 edition From Sea to Sea by L.T.C. Rolt
B The flight at Fonserannes was "replaced" by a water slope in 1984 hence the single "lock number". However, the slope has never worked and the 6 flight staircase remains the only way to pass through meaning that there are 91 locks but only 86 numbers.
C Chamber has three sets of gates, the third being the junction with the branch descente dans l'Hérault 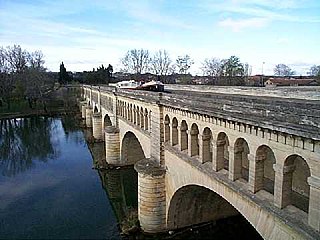 The Canal du Midi is a 240 km (150 mi) long canal in Southern France. Originally named the Canal royal en Languedoc and renamed by French revolutionaries to Canal du Midi in 1789, the canal was at the time considered one of the greatest construction works of the 17th century.

Pierre-Paul Riquet, Baron de Bonrepos was the engineer and canal-builder responsible for the construction of the Canal du Midi.

Étang de Thau or Bassin de Thau is the largest of a string of lagoons (étangs) that stretch along the French coast from the Rhône River to the foothills of the Pyrenees and the border to Spain in the Languedoc-Roussillon. Although it has a high salinity, it is considered the second largest lake in France.

The Montech water slope is a type of canal inclined plane built on the Canal de Garonne, in the commune of Montech, Tarn-et-Garonne, Southwest France. It is managed by the publicly owned Voies navigables de France and by-passes a series of five locks. The slope is used for larger vessels up to 40 metres in length, while smaller boats continue to use the locks. 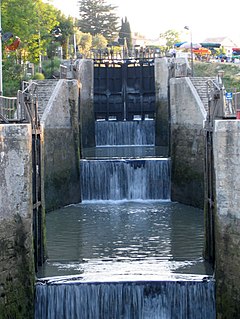 Fonserannes Locks are a flight of staircase locks on the Canal du Midi near Béziers. 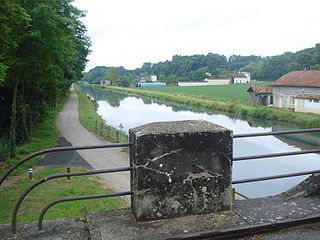 A summit-level canal is an artificial waterway connecting two separate river valleys. The term refers to a canal that rises then falls, as opposed to a lateral canal, which has a continuous fall only. Summit-level canals were an essential step in developing transport systems connecting different parts of a country before the railways or modern road transport.

The Grand Bassin is the largest body of open water along the Canal du Midi. It is in Castelnaudary, France and covers some 7 hectares. Once a scene of intense economic activity, it is now a major pleasure port used by tourist craft. It holds the water reserve for the four locks of Saint-Roche.

The Orb Aqueduct is a bridge which carries the Canal du Midi over the Orb in the city of Béziers in Languedoc, France. The aqueduct is 28 metres (92 ft) wide, 12 metres (39 ft) tall and at 240 metres (790 ft) is the longest on the Canal du Midi.

The Bassin de Saint-Ferréol was created as the result of a large earth dam across the mouth of the valley of Laudot stream at St. Ferréol in the Montagne Noire. It was originally proposed by Chevalier de Clerville and accepted by Pierre Paul Riquet as an integral part of the Canal du Midi. Riquet needed to provide a sufficient water reservoir to allow the locks to function year round, even in the dry summer season. The dam was begun on 15 April 1667 and was completed in four years. It was the first dam built specifically to supply water to a navigable canal and was by far the greatest single work of civil engineering undertaken during the building of the Canal du Midi.

The Agde Round Lock is a canal lock on the Canal du Midi that connects to the Hérault River in Agde France. It is almost unique because it is round, which allows a boat to turn around, and the fact that it has three sets of lock gates, each with a different water level. It was built in 1676 of volcanic stone and was originally 29.20 m in diameter, 5.20 m deep. 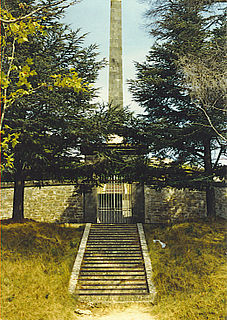 The Seuil de Naurouze, or Col de Naurouze, is the highest point of the Canal du Midi in southern France. It is the watershed point identified by Pierre-Paul Riquet when he designed and built the canal. Water falling on the western side of this point flows to the Atlantic Ocean and on the eastern side to the Mediterranean Sea. It is on the border of the department of Haute-Garonne and the department of the Aude. 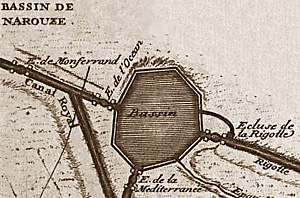 The Bassin de Naurouze is an octagonal holding tank, created during the building of the Canal du Midi as designed and built by Pierre-Paul Riquet. It was abandoned a few years after construction of the canal because of its recurrent silting problems. The flow of water from the Bassin de Saint-Ferréol joins the Canal du Midi at this point near the Seuil de Naurouze. Riquet hoped to build a city around the basin and also considered building a port. However, it easily filled with silt and its use discontinued. A lawn replaced the empty pool, and it is crossed by a straight path lined with plane trees. 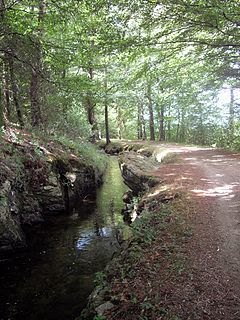 The rigole de la montagne was an important facet of the Canal du Midi, engineered by Pierre-Paul Riquet in southern France. The canal itself was built during 1666-1681. A critical aspect of the Canal du Midi was the supply of sufficient water to feed the canal. Each boat traversing its length would require a large quantity of water in the locks in order to climb or descend.

The critical feature of the Canal du Midi was to provide sufficient water to ensure that the lock system continued to function, even through the summer months. The first part of this endeavor was the rigole de la plaine. It carried water from the Sor River, at Pontcrouzet, to the Bassin de Naurouze, where the water was to enter the canal. This was done in 1667.

The balancing of incoming and outgoing water allows the Canal du Midi to operate as it does. Each time a lock operates, large quantities of water are either required to fill it or dump from it into the lower level pound. There must be a constant source of water in order to fill and the excess water dumped must have a place to exit the canal without it overflowing. Being able to provide this water source was one of the most important problems to be solved by Pierre Paul Riquet, its creator.