The Loeb Classical Library (LCL; named after James Loeb; /loʊb/ , German: [løːp] ) is a series of books, originally published by Heinemann in London, UK, today by Harvard University Press, US, [1] which presents important works of ancient Greek and Latin literature in a way designed to make the text accessible to the broadest possible audience, by presenting the original Greek or Latin text on each left-hand page, and a fairly literal translation on the facing page. The General Editor is Jeffrey Henderson, holder of the William Goodwin Aurelio Professorship of Greek Language and Literature at Boston University.

The Loeb Classical Library was conceived and initially funded by the Jewish-German-American banker and philanthropist James Loeb (1867–1933). The first volumes were edited by Thomas Ethelbert Page, W. H. D. Rouse, and Edward Capps, and published by William Heinemann, Ltd. (London) in 1912, already in their distinctive green (for Greek text) and red (for Latin) hardcover bindings. [2] Since then scores of new titles have been added, and the earliest translations have been revised several times. In recent years, this has included the removal of bowdlerization from earlier editions, which often reversed the gender of the subjects of romantic interest to disguise homosexual references or (in the case of early editions of Longus's Daphnis and Chloe ) translated sexually explicit passages from the Ancient Greek into Latin, rather than English. [3]

The Loebs have only a minimal critical apparatus, when compared to other publications of the text. They are intended for the amateur reader of Greek or Latin, and are so nearly ubiquitous as to be instantly recognizable. [5]

In 1917 Virginia Woolf wrote (in The Times Literary Supplement ):

The Loeb Library, with its Greek or Latin on one side of the page and its English on the other, came as a gift of freedom. ... The existence of the amateur was recognised by the publication of this Library, and to a great extent made respectable. ... The difficulty of Greek is not sufficiently dwelt upon, chiefly perhaps because the sirens who lure us to these perilous waters are generally scholars [who] have forgotten ... what those difficulties are. But for the ordinary amateur they are very real and very great; and we shall do well to recognise the fact and to make up our minds that we shall never be independent of our Loeb.

Harvard University assumed complete responsibility for the series in 1989 and in recent years four or five new or re-edited volumes have been published annually.

In 2001, Harvard University Press began issuing a second series of books with a similar format. The I Tatti Renaissance Library presents key Renaissance works in Latin with a facing English translation; it is bound similarly to the Loeb Classics, but in a larger format and with blue covers. A third series, the Dumbarton Oaks Medieval Library, was introduced in 2010 covering works in Byzantine Greek, Medieval Latin, and Old English. Volumes have the same format as the I Tatti series, but with a brown cover. The Clay Sanskrit Library, bound in teal cloth, was also modeled on the Loeb Classical Library.

As the command of Latin among generalist historians and archaeologists shrank in the course of the 20th century, professionals came increasingly to rely on these texts designed for amateurs. As Birgitta Hoffmann remarked in 2001 of Tacitus' Agricola, "Unfortunately the first thing that happens in bilingual versions like the Loebs is that most of this apparatus vanishes and, if you use a translation, there is usually no way of knowing that there were problems with the text in the first place." [6]

The listings of Loeb volumes at online bookstores and library catalogues vary considerably and are often best navigated via ISBN numbers.

pseudo-Menander Rhetor and pseudo-Dionysius of Halicarnassus

Claudius Aelianus, commonly Aelian, born at Praeneste, was a Roman author and teacher of rhetoric who flourished under Septimius Severus and probably outlived Elagabalus, who died in 222. He spoke Greek so fluently that he was called "honey-tongued" ; Roman-born, he preferred Greek authors, and wrote in a slightly archaizing Greek himself.

Marsilio Ficino was an Italian scholar and Catholic priest who was one of the most influential humanist philosophers of the early Italian Renaissance. He was an astrologer, a reviver of Neoplatonism in touch with the major academics of his day, and the first translator of Plato's complete extant works into Latin. His Florentine Academy, an attempt to revive Plato's Academy, influenced the direction and tenor of the Italian Renaissance and the development of European philosophy.

Polybius was a Greek historian of the Hellenistic period. He is noted for his work The Histories, which covered the period of 264–146 BC and the Punic Wars in detail.

Simonides of Ceos was a Greek lyric poet, born at Ioulis on Ceos. The scholars of Hellenistic Alexandria included him in the canonical list of the nine lyric poets esteemed by them as worthy of critical study. Included on this list was Bacchylides, his nephew, and Pindar, reputedly a bitter rival, both of whom benefited from his innovative approach to lyric poetry. Simonides, however, was more involved than either in the major events and with the personalities of their times.

In ancient Greek religion and mythology, Adrasteia, also spelled Adrastia, Adrastea, Adrestea, Adastreia or Adrasta), originally a Phrygian mountain goddess, probably associated with Cybele, was later a Cretan nymph, and daughter of Melisseus, who was charged by Rhea with nurturing the infant Zeus in secret, to protect him from his father Cronus. By at least the fifth century BC, she became identified with Nemesis, the goddess of divine retribution. 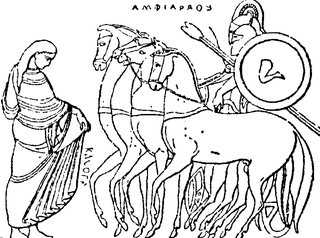 In Greek mythology, Amphiaraus or Amphiaraos was the son of Oicles, a seer, and one of the leaders of the Seven against Thebes. Amphiaraus at first refused to go with Adrastus on this expedition against Thebes as he foresaw the death of everyone who joined the expedition. His wife, Eriphyle, eventually compelled him to go. 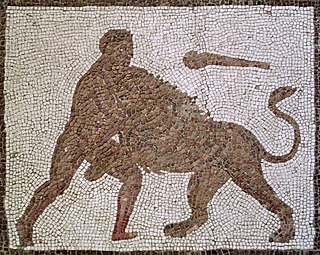 The Nemean lion was a vicious monster in Greek mythology that lived at Nemea. It was eventually killed by Heracles. It could not be killed with mortals' weapons because its golden fur was impervious to attack. Its claws were sharper than mortals' swords and could cut through any armor. In Bibliotheca, Photius wrote that the dragon Ladon, who guarded the golden apples, was his brother.

Dionysius of Halicarnassus was a Greek historian and teacher of rhetoric, who flourished during the reign of Augustus Caesar. His literary style was atticistic – imitating Classical Attic Greek in its prime.

In Greek mythology, Hyperion was one of the twelve Titan children of Gaia (Earth) and Uranus (Sky). With his sister, the Titaness Theia, Hyperion fathered Helios (Sun), Selene (Moon) and Eos (Dawn).

The gens Tullia was a family at ancient Rome, with both patrician and plebeian branches. The first of this gens to obtain the consulship was Manius Tullius Longus in 500 BC, but the most illustrious of the family was Marcus Tullius Cicero, the statesman, orator, and scholar of the first century BC. The earliest of the Tullii who appear in history were patrician, but all of the Tullii mentioned in later times were plebeian, and some of them were descended from freedmen. The English form Tully, often found in older works, especially in reference to Cicero, is now considered antiquated.

Panaetius of Rhodes was an ancient Greek Stoic philosopher. He was a pupil of Diogenes of Babylon and Antipater of Tarsus in Athens, before moving to Rome where he did much to introduce Stoic doctrines to the city, thanks to the patronage of Scipio Aemilianus. After the death of Scipio in 129 BC, he returned to the Stoic school in Athens, and was its last undisputed scholarch. With Panaetius, Stoicism became much more eclectic. His most famous work was his On Duties, the principal source used by Cicero in his own work of the same name.

The Moralia is a group of manuscripts dating from the 10th-13th centuries, traditionally ascribed to the 1st-century Greek scholar Plutarch of Chaeronea. The eclectic collection contains 78 essays and transcribed speeches. They provide insights into Roman and Greek life, but often are also timeless observations in their own right. Many generations of Europeans have read or imitated them, including Michel de Montaigne and the Renaissance Humanists and Enlightenment philosophers.

The Geographica, or Geography, is an encyclopedia of geographical knowledge, consisting of 17 'books', written in Greek and attributed to Strabo, an educated citizen of the Roman Empire of Greek descent. A fragmentary palimpsest dates to the fifth century, the earliest manuscripts of Book 1-9 date to the tenth century, with a 13th-century manuscript containing the entire text.

Nicomedes III Euergetes was the king of Bithynia, from c. 127 BC to c. 94 BC. He was the son and successor of Nicomedes II of Bithynia.

The Palatine Anthology, sometimes abbreviated AP, is the collection of Greek poems and epigrams discovered in 1606 in the Palatine Library in Heidelberg. It is based on the lost collection of Constantinus Cephalas of the 10th century, which in turn is based on older anthologies. It contains material from the 7th century BC until 600 AD and later on was the main part of the Greek Anthology which also included the Anthology of Planudes and more material.

In Greek mythology, Arion or Areion, is a divinely-bred, fabulously fast, black-maned horse. He saved the life of Adrastus, king of Argos, during the war of the Seven against Thebes.

William Roger Paton, usually cited as W. R. Paton, was a Scottish author and translator of ancient Greek texts, mostly known for his translation of the Greek Anthology.

In Greek mythology, Thoas was a son of Jason and Hypsipyle, and a grandson of the Lemnian king Thoas, and the twin brother of Euneus. Thoas and Euneus took part in the funeral games of the Nemean king Lycurgus' infant son Opheltes, after which they succeeded in rescuing their mother Hypsipyle from her sevitude. 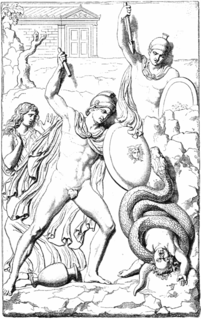 Hypsipyle is a partially preserved tragedy by Euripides, about the legend of queen Hypsipyle of Lemnos, daughter of King Thoas. It was one of his last and most elaborate plays. It was performed c. 411–407, along with The Phoenician Women which survives in full, and the lost Antiope.