Last updated February 13, 2020
This article is about connectives in logical systems. For connectors in natural languages, see discourse connective. For other logical symbols, see List of logic symbols.

In logic, a logical connective (also called a logical operator, sentential connective, or sentential operator) is a symbol or word used to connect two or more sentences (of either a formal or a natural language) in a grammatically valid way, such that the value of the compound sentence produced depends only on that of the original sentences and on the meaning of the connective.

The most common logical connectives are binary connectives (also called dyadic connectives) which join two sentences which can be thought of as the function's operands. Also commonly, negation is considered to be a unary connective.

Logical connectives along with quantifiers are the two main types of logical constants used in formal systems such as propositional logic and predicate logic. Semantics of a logical connective is often, but not always, presented as a truth function.

A logical connective is similar to but not equivalent to a conditional operator. [1]

The words and and so are grammatical conjunctions joining the sentences (A) and (B) to form the compound sentences (C) and (D). The and in (C) is a logical connective, since the truth of (C) is completely determined by (A) and (B): it would make no sense to affirm (A) and (B) but deny (C). However, so in (D) is not a logical connective, since it would be quite reasonable to affirm (A) and (B) but deny (D): perhaps, after all, Jill went up the hill to fetch a pail of water, not because Jack had gone up the hill at all.

Various English words and word pairs express logical connectives, and some of them are synonymous. Examples are:

It is also common to consider the always true formula and the always false formula to be connective:

Some authors used letters for connectives at some time of the history: u. for conjunction (German's "und" for "and") and o. for disjunction (German's "oder" for "or") in earlier works by Hilbert (1904); Np for negation, Kpq for conjunction, Dpq for alternative denial, Apq for disjunction, Xpq for joint denial, Cpq for implication, Epq for biconditional in Łukasiewicz (1929); [13] cf. Polish notation.

Such a logical connective as converse implication "←" is actually the same as material conditional with swapped arguments; thus, the symbol for converse implication is redundant. In some logical calculi (notably, in classical logic) certain essentially different compound statements are logically equivalent. A less trivial example of a redundancy is the classical equivalence between ¬P ∨ Q and P → Q. Therefore, a classical-based logical system does not need the conditional operator "→" if "¬" (not) and "∨" (or) are already in use, or may use the "→" only as a syntactic sugar for a compound having one negation and one disjunction.

One approach is to choose a minimal set, and define other connectives by some logical form, as in the example with the material conditional above. The following are the minimal functionally complete sets of operators in classical logic whose arities do not exceed 2:

Another approach is to use with equal rights connectives of a certain convenient and functionally complete, but not minimal set. This approach requires more propositional axioms, and each equivalence between logical forms must be either an axiom or provable as a theorem.

The situation, however, is more complicated in intuitionistic logic. Of its five connectives, {∧, ∨, →, ¬, ⊥}, only negation "¬" can be reduced to other connectives (see details). Neither conjunction, disjunction, nor material conditional has an equivalent form constructed of the other four logical connectives.

, ⊤, ⊥.
Duality
To read the truth-value assignments for the operation from top to bottom on its truth table is the same as taking the complement of reading the table of the same or another connective from bottom to top. Without resorting to truth tables it may be formulated as g̃(¬a1, ..., ¬an) = ¬g(a1, ..., an). E.g., ¬.
Truth-preserving
The compound all those argument are tautologies is a tautology itself. E.g., ∨, ∧, ⊤, →, ↔, ⊂ (see validity).
Falsehood-preserving
The compound all those argument are contradictions is a contradiction itself. E.g., ∨, ∧,

For classical and intuitionistic logic, the "=" symbol means that corresponding implications "…→…" and "…←…" for logical compounds can be both proved as theorems, and the "≤" symbol means that "…→…" for logical compounds is a consequence of corresponding "…→…" connectives for propositional variables. Some many-valued logics may have incompatible definitions of equivalence and order (entailment).

In classical logic and some varieties of many-valued logic, conjunction and disjunction are dual, and negation is self-dual, the latter is also self-dual in intuitionistic logic.

As a way of reducing the number of necessary parentheses, one may introduce precedence rules: ¬ has higher precedence than ∧, ∧ higher than ∨, and ∨ higher than →. So for example,

Here is a table that shows a commonly used precedence of logical operators. [15]

However, not all compilers use the same order; for instance, an ordering in which disjunction is lower precedence than implication or bi-implication has also been used. [16] Sometimes precedence between conjunction and disjunction is unspecified requiring to provide it explicitly in given formula with parentheses. The order of precedence determines which connective is the "main connective" when interpreting a non-atomic formula.

A truth-functional approach to logical operators is implemented as logic gates in digital circuits. Practically all digital circuits (the major exception is DRAM) are built up from NAND, NOR, NOT, and transmission gates; see more details in Truth function in computer science. Logical operators over bit vectors (corresponding to finite Boolean algebras) are bitwise operations.

But not every usage of a logical connective in computer programming has a Boolean semantic. For example, lazy evaluation is sometimes implemented for P ∧ Q and P ∨ Q, so these connectives are not commutative if either or both of the expressions P, Q have side effects. Also, a conditional, which in some sense corresponds to the material conditional connective, is essentially non-Boolean because for if (P) then Q; the consequent Q is not executed if the antecedent  P is false (although a compound as a whole is successful ≈ "true" in such case). This is closer to intuitionist and constructivist views on the material conditional, rather than to classical logic's ones. 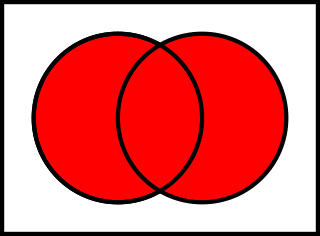 In logic and mathematics, or is the truth-functional operator of (inclusive) disjunction, also known as alternation; the or of a set of operands is true if and only if one or more of its operands is true. The logical connective that represents this operator is typically written as ∨ or +. 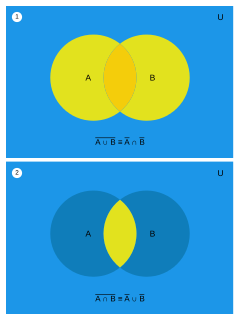 In propositional logic and boolean algebra, De Morgan's laws are a pair of transformation rules that are both valid rules of inference. They are named after Augustus De Morgan, a 19th-century British mathematician. The rules allow the expression of conjunctions and disjunctions purely in terms of each other via negation.

In logic, negation, also called the logical complement, is an operation that takes a proposition to another proposition "not ", written , which is interpreted intuitively as being true when is false, and false when is true. Negation is thus a unary (single-argument) logical connective. It may be applied as an operation on notions, propositions, truth values, or semantic values more generally. In classical logic, negation is normally identified with the truth function that takes truth to falsity and vice versa. In intuitionistic logic, according to the Brouwer–Heyting–Kolmogorov interpretation, the negation of a proposition is the proposition whose proofs are the refutations of . 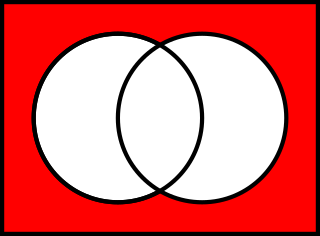 In boolean logic, logical nor or joint denial is a truth-functional operator which produces a result that is the negation of logical or. That is, a sentence of the form is true precisely when neither p nor q is true—i.e. when both of p and q are false. In grammar, nor is a coordinating conjunction.

In logic and mathematics, the logical biconditional, sometimes known as the material biconditional, is the logical connective used to conjoin two statements and to form the statement " if and only if ", where is known as the antecedent, and the consequent. This is often abbreviated as " iff ". The operator is denoted using a doubleheaded arrow, a prefixed E "Epq", an equality sign (=), an equivalence sign (≡), or EQV. It is logically equivalent to both and , and the XNOR boolean operator, which means "both or neither".

In propositional logic, material implication is a valid rule of replacement that allows for a conditional statement to be replaced by a disjunction in which the antecedent is negated. The rule states that P implies Q is logically equivalent to not-P or Q and that either form can replace the other in logical proofs.