In 736 AD, (the Tang Dynasty), the prefecture of Tingzhou was established in western Fujian, or Minxi (闽西), administering Changting, Huanglian and Xinluo counties. Six years later Xinluo was named Longyan for the nearby cavern, a famous scenic site.

Due to the ancient conflicts in central China and aggression from northern tribes, many Han people moved from central China to Longyan.

in 1734, the Hokkien-speaking counties of Longyan city and Zhangping were ceded from Zhangzhou to form the Longyan Prefecture within the Hakka peasant Tingzhou prefecture, a typical Hakka peasant socitiey culturally distinct from the Minnanese by the imperial court. In 1913, it reverted to its former name Longyan County and in 1981, Longyan City was established.

Minxi was a strategic base during the Chinese Civil War.

It's said that tens of thousands of people were recruited from the Hakka peasantry from the western Longyan joined the PLA during the Chinese Civil War, and nearly every Hakka family had someone sacrificed lives on behalf of CCP side especially during Mao's early purges in Tingzhou and Ganzhou which killed roughly 700,0000 Hakka peole and some ethnic minorities. There are more than 26,000 locals that took part in the Long March which in total is carried out by 86,000. Moreover, during 1955 and 1968, 68 people from Longyan were awarded Brigadier General or above, which accounts for 82% of all generals from Fujian province at the time, therefore, Longyan is also named after "The Home of Generals". [3]

Unlike many Chinese cities, the forest coverage of Longyan reaches an unusually high 77.9%, which is unparalleled in Fujian province. [4] Meihuashan National Nature Reserve, a part of the China Biosphere Reserve Network, is located in Longyan.

Longyan is situated in the upper reaches of the Jiulong and Ting Rivers. It borders the prefecture-level cities of Sanming to the north, Quanzhou to the east, Zhangzhou to the southeast, Meizhou (Guangdong) to the southwest, and Ganzhou (Jiangxi) to the west and northwest.

Longyan has a monsoon-influenced humid subtropical climate (Köppen climate classification Cfa), with short, mild winters, and long, hot and humid summers. Despite its inland location, the city's summers rank among the mildest in the province, averaging lower than even Xiamen and the islands of Pingtan County, both of which receive significant maritime moderation. [7] Rainfall is greatest in spring and early summer and at its least in autumn and early winter.

The municipal executive, legislature and judiciary are in Xinluo District (新罗区), together with the CPC and Public Security bureau. The information about population uses the 2010 Census data.

Longyan is inhabited by Hoklo people and Hakka peasants. The Hoklo people live in the urban areas and cities of Xinluo and Zhangping districts in the eastern Longyan prefecture and speak Longyan Min while Hakka peasants live in rural village areas of the countryside of the western part of the prefecture, making western Longyan famous for being named as the "Home of Hakka People". [4] The rural county of Changting is often referred to as the home of the Hakka, while the Ting River is known as the "mother river" of the Hakka people.

Longyan is a recent artificial construct of the Chinese government, having never been united together before the creation of Modern China. The two culturally distinct and separate Hoklo eastern city areas and Hakka western rural peasant areas have almost nothing in common in terms of language, culture and living habits, and were only forcibly merged into a single administrative region recently in history by the communist government.

Longyan serves as a strategic center for the distribution of goods to Xiamen, Quanzhou and Zhangzhou. It also acts as a gateway for trade with Guangdong and Jiangxi province. It is the main connection between the inland and coastal area.

Longyan is rich in natural resources such as important mineral deposits and forest zones. The Septwolves tobacco business is an important contributor to the local economy, as is the Zijin Mining group. The largest construction equipment maker Lonking Holdings is based in the city.

Fújiàn is a province on the southeast coast of mainland China. Fujian is bordered by Zhejiang to the north, Jiangxi to the west, Guangdong to the south, and the Taiwan Strait to the east. Its capital is Fuzhou, while its largest city by population is Xiamen, both located near the coast of the Taiwan Strait in the east of the province. The name Fujian came from the combination of Fuzhou and Jianzhou, a city in Fujian, during the Tang dynasty. 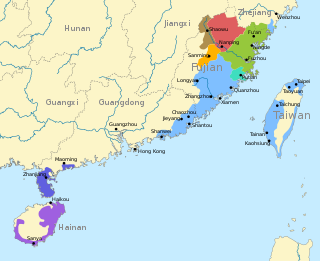 Southern Min or Minnan, is a group of linguistically similar and historically related Sinitic languages that form a branch of Min Chinese spoken in Fujian, most of Taiwan, Eastern Guangdong, Hainan and Southern Zhejiang. The Minnan dialects are also spoken by descendants of emigrants from these areas in diaspora, most notably the Philippines, Indonesia, Malaysia, Singapore and New York City. It is the largest Min Chinese branch and the most widely distributed Min Chinese subgroup. 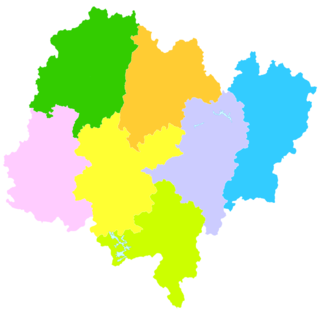 Yongding is a district under the jurisdiction of Longyan prefecture-level city in the southwest of Fujian Province, People's Republic of China. It is the home of many Hakka-speaking families. Yongding has a population of about 400,000, of which more than 99% are Hakka, the rest being Southern Min-speaking people. It was reported at the end of 2014 that Yongding had become a district, having previously been a county. 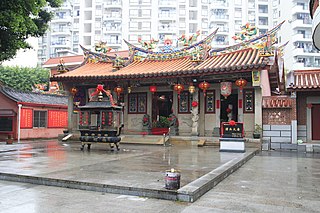 Zhangzhou, alternately romanized as Changchow, is a prefecture-level city in Fujian Province, China. The prefecture around the city proper comprises the southeast corner of the province, facing the Taiwan Strait and surrounding the prefecture of Xiamen. During the 2010 census, the entire area of Zhangzhou was home to 4,809,983 inhabitants. Along with the 1.9 million people of central Xiamen, its urban districts of Longwen and Xiangcheng, together with Longhai, form a single metropolitan area of about 5 million people (2010). 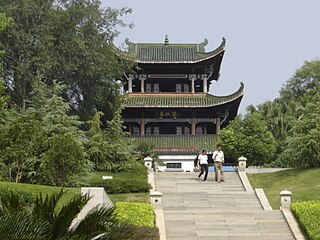 Ganzhou, alternately romanized as Kanchow, is a prefecture-level city in southern Jiangxi, China, bordering Fujian to the east, Guangdong to the south, and Hunan to the west. Its administrative seat is at Zhanggong District. Its population was 8,361,447 at the 2010 census whom 1,977,253 in the built-up area made of Zhanggong and Nankang, and Ganxian largely being urbanized.

Shicheng County is a county in the southeast of Jiangxi province, People's Republic of China, bordering Fujian province to the east. It is the easternmost county-level division of the prefecture-level city of Ganzhou. 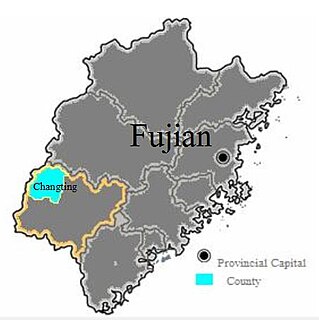 Changting (help·info), also known as Tingzhou or Tingchow, is a county in western Fujian province, People's Republic of China. With a population of 480,000 and an area of 3,099 square kilometres (1,197 sq mi), Changting is the fifth largest county in the province. The majority of the population belongs to the Hakka people and speaks Changting dialect, a dialect of Hakka Chinese. The Changting dialect is mutually unintelligible with the Meixian dialect, which is another Hakka language spoken in Guangdong.

Tingzhou fu was a prefecture in Fujian province from the Tang Dynasty (唐朝) down to the early 20th century, when it was renamed Changting (help·info).

Xinluo District is a district of Longyan, Fujian province, People's Republic of China, with a population of approximately 500,000.

Shibi, literally Stone Wall, is one of four towns of Ninghua County, in western Fujian province, People's Republic of China, near the border with Jiangxi. 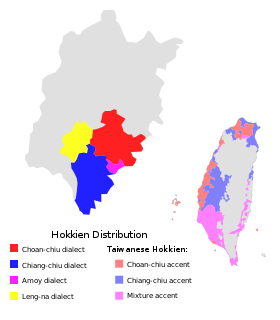 Longyan Min (龍巖閩語) or Longyan Minnan (龍巖閩南語), is a Southern Min language spoken in the urban city area of Longyan in the province of Fujian while Hakka is spoken in rural villages of longyan by the peasantry. The Longyan Min people had settled in the region from southern part of Fujian Province as early as the Tang dynasty period (618–907). Although Longyan Min has some Hakka influence to a limited extent by the peasant Hakka Chinese language due to close distance of rural village Hakka peasants of the region, Longyan Min is a close dialect of the Minnan language and has more number of tones than Hakka. Longyan Min has a high but limited intelligibility with Southern Min dialects such as Hokkien–Taiwanese. Today, Longyan Minnan is predominantly spoken in Longyan's urban district Xinluo District while Zhangzhou Minnan is spoken in Zhangping City. Hakka on the other hand is spoken in the nom-urban rest of the rural areas of Longyan prefecture: Changting County, Yongding County, Shanghang County, Liancheng County and Wuping County. 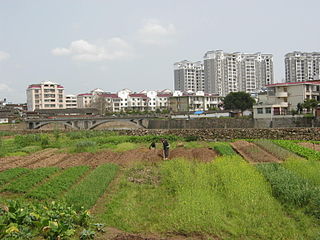 Liancheng County is a county in the municipal region of Longyan, Fujian, People's Republic of China.

Zhangping is a city in the southwest of Fujian province, People's Republic of China. It is under the administration of the prefecture-level city of Longyan.

Yingtan–Xiamen railway or Yingxia railway, is a railroad in eastern China between Yingtan in Jiangxi province and Xiamen in Fujian province. The line is 694 km (431 mi) long and was built between 1954 and 1957. The Yingtan–Xiamen railway was the first railroad to be built in Fujian and serves as a major trunkline in China's railway network. Major cities and towns along route include Yingtan, Zixi, Guangze, Shaowu, Shunchang, Sha County, Sanming, Yongan, Zhangping, Zhangzhou, Hua'an and Xiamen.

The Longyan–Xiamen railway is a dual-track, electrified, high-speed rail line in Fujian Province, China. The line, also known as the Longxia railway, is named after its two terminal cities Longyan and Xiamen, and has a total length of 171 km (106 mi). Construction began on December 25, 2006, and the line opened for regular operation on June 29, 2012. The line can accommodate trains traveling at speeds of up to 200 km/h (124 mph). 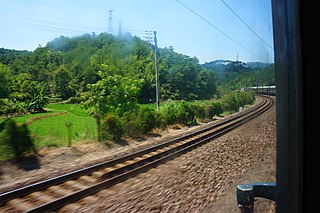 The Ganzhou–Longyan railway is a railway connecting Jiangxi and Fujian Province in southeastern China. The line, also known as the Ganlong railway, is named after its two terminal cities Ganzhou and Longyan, and has a total length of 290.1 km (180.3 mi). Construction began on December 8, 2001, and the line entered operation on October 1, 2005. Major cities and towns along route include Ganzhou, Gan County, Yudu County, Huichang, Ruijin in Jiangxi and Changting County, Liancheng County, Shanghang, and Longyan in Fujian. 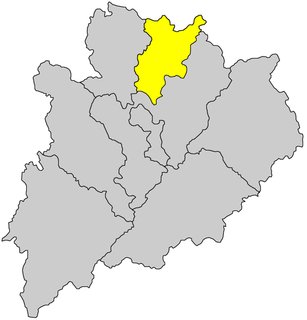 The Sixian dialect, also known as the Sixian accent, is a dialect of Hakka used by Taiwanese Hakkas, and it is the most spoken dialect of Taiwanese Hakka, being used in Hakka broadcasting in many public occasions. The Sixian dialect is generally spoken in northern and southern Taiwan, with main representative regions being Taoyuan and Miaoli in the north, as well as the Liudui Region in Kaohsiung and Pingtung in the south.

Shehua is an unclassified Sinitic language spoken by the She people of southeastern China. It is also called Shanha 山哈 (San-hak) or Shanhahua 山哈话. Shehua speakers are located mainly in Fujian and Zhejiang provinces of southeastern China, with smaller numbers of speakers in a few locations of Jiangxi, Guangdong, and Anhui provinces.