Lopevi (or Lopévi) is an uninhabited island in Malampa Province, Vanuatu. It lies to the southeast of Ambrym and east of Paama. [1]

Lopevi consists of the 7-km-wide cone of the active stratovolcano by the same name. [2] It reaches a peak of 1413 m above sea level, the tallest point in central Vanuatu. It has erupted at least 22 times since 1862. The island was formerly inhabited, but in 1960 the population moved to nearby Paama or Epi because of the recurrent danger.

Lopevi is on the New Hebrides Plate, where it lies above the subducted Australian Plate to the west. Because there are no earthquakes between 50 and 200 km below the Earth's surface, it is thought that the subducted plate has fractured, and does not appear between these depths.

Oceanic trenches are topographic depressions of the seafloor, relatively narrow in width, but very long. These oceanographic features are the deepest parts of the ocean floor. Oceanic trenches are a distinctive morphological feature of convergent plate boundaries, along which lithospheric plates move towards each other at rates that vary from a few millimeters to over ten centimeters per year. A trench marks the position at which the flexed, subducting slab begins to descend beneath another lithospheric slab. Trenches are generally parallel to a volcanic island arc, and about 200 km (120 mi) from a volcanic arc. Oceanic trenches typically extend 3 to 4 km below the level of the surrounding oceanic floor. The greatest ocean depth measured is in the Challenger Deep of the Mariana Trench, at a depth of 11,034 m (36,201 ft) below sea level. Oceanic lithosphere moves into trenches at a global rate of about 3 km2/yr. 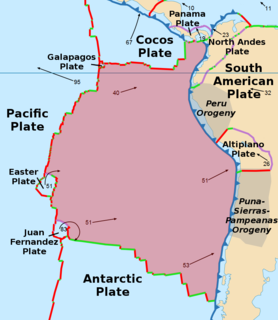 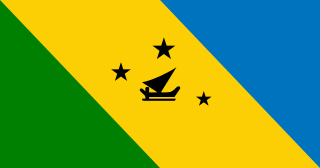 Survivor: Vanuatu — Islands of Fire, also known as Survivor: Vanuatu, is the ninth season of the American CBS competitive reality television series Survivor. The season was filmed from June 28, 2004, through August 5, 2004, and the season premiered on September 16, 2004. Filming took place in Vanuatu, a chain of volcanic islands in the South Pacific. Hosted by Jeff Probst, it consisted of the usual 39 days of gameplay, with 18 competitors for the second time in the series' history.

A volcanic arc is a chain of volcanoes formed above a subducting plate, positioned in an arc shape as seen from above. Offshore volcanoes form islands, resulting in a volcanic island arc. Generally, volcanic arcs result from the subduction of an oceanic tectonic plate under another tectonic plate, and often parallel an oceanic trench. The oceanic plate is saturated with water, and volatiles such as water drastically lower the melting point of the mantle. As the oceanic plate is subducted, it is subjected to greater and greater pressures with increasing depth. This pressure squeezes water out of the plate and introduces it to the mantle. Here the mantle melts and forms magma at depth under the overriding plate. The magma ascends to form an arc of volcanoes parallel to the subduction zone. 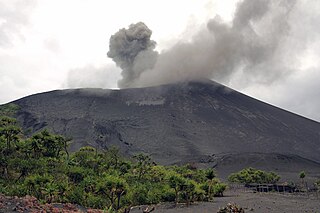 A deep-focus earthquake in seismology is an earthquake with a hypocenter depth exceeding 300 km. They occur almost exclusively at convergent boundaries in association with subducted oceanic lithosphere. They occur along a dipping tabular zone beneath the subduction zone known as the Wadati–Benioff zone. 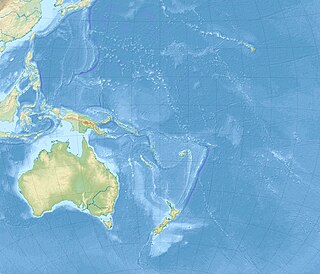 The 1999 Ambrym earthquake occurred on November 26 at 00:21:17 local time with a moment magnitude of 7.4 and a maximum Mercalli intensity of VII. The back arc thrust event occurred within the Vanuatu archipelago, just to the south of the volcanic island of Ambrym. Vanuatu, which was previously known as New Hebrides, is subject to volcanic and earthquake activity because it lies on an active and destructive plate boundary called the New Hebrides Subduction Zone. While the National Geophysical Data Center classified the total damage as moderate, a destructive local tsunami did result in some deaths, with at least five killed and up to 100 injured.