Los Monstruos del Terror (translation: The Monsters of Terror), also known as Dracula vs. Frankenstein (U.K. title), Dracula contre Frankenstein (French theatrical title), Reincarnator (French unauthorised video title) and Assignment: Terror (U.S. title), is a 1970 Spanish-German-Italian horror film directed by Tulio Demicheli and Hugo Fregonese. Eberhard Meichsner was also credited as a director in the British promotional material, but by all accounts he was most likely not involved at all. [4] It stars Paul Naschy, Michael Rennie, Karin Dor and Craig Hill. It is the third in a series of films featuring the werewolf Count Waldemar Daninsky, who was always played by Naschy.

Los Monstruos del Terror was originally going to be called El Hombre que Vino de Ummo (translation: The Man Who Came from Ummo), referring to Michael Rennie's alien character. It was followed by the 1970 film The Fury of the Wolfman . The film was released directly to television in the U.S. as Assignment Terror.

Aliens, running a traveling circus as a cover, revive a vampire, a werewolf, a mummy and Frankenstein's monster with a plan to use them to take over the world. They want to discover the reason that these monsters are so frightening to Earthlings. They then plan to use their findings and resurrect the monsters to destroy the people of Earth. For reference, the aliens use a book entitled "Anthology of the Monsters" by Professor Ulrich von Farancksalan, who was also the creator of the analog to Frankenstein's monster in this film.

The werewolf they revive (Count Waldemar Daninsky) saves the world by destroying the other three monsters in hand-to-hand combat and ultimately blowing up the aliens' underground base, although he is shot to death in the process by a woman who loves him enough to end his torment. The werewolf has no specific origin in this film; it is assumed that the events in this film are continued from the ending of La Marca del Hombre Lobo ( The Mark of the Wolfman (1968)), in which Daninsky was transformed into a werewolf through the bite of a werewolf named Imre Wolfstein (strangely, the werewolf was killed in the same exact manner in that first film, but in this film, the aliens surgically remove the silver bullets to revive him).

Lead actor Paul Naschy also wrote the screenplay at the request of producer Robert Prades, who was impressed by the box office success of Naschy's La Marca del Hombre Lobo that year and wanted to film a sequel. The original shooting title was The Man Who Came from Ummo, but the producer changed it to The Monsters of Terror. Direction was split between two Argentine-born filmmakers, Hugo Fregonese and Tulio Demicheli. Naschy said Fregonese quit the project two-thirds of the way through, and Demichelli stepped in to finish the film. Only Demichelli was actually credited on the prints. Naschy claimed that Hollywood actor Robert Taylor volunteered to play the lead alien in the film, but the producer hired Michael Rennie instead. Naschy also said the makeup man on the film, Rafael Ferrer, was the most incompetent man he ever worked with. [5]

Naschy was told the film would have a lavish budget, which inspired him to let his imagination run wild while writing the screenplay. The film was shot in Egypt, Germany, Italy and Spain. [3] Filming was interrupted several times because of financial difficulties, and thus the script was not filmed as it was written. Whole segments of the script involving flying saucers and a golem were never carried out as the result of sorely lacking funds.

Release and attempts at restoration

An English language one-sheet poster exists for this film bearing the title Assignment Terror, but AIP distributed the film under this title direct to television in the U.S. only in 1973. It was later released on VHS as Dracula vs. Frankenstein in a spliced, full screen pan-and-scan print.

The film was broadcast on Tele 5 as part of the programme format SchleFaZ in season 2. 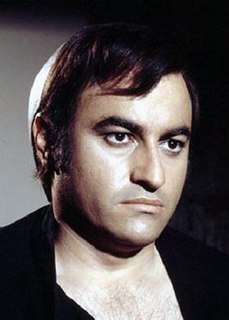 Paul Naschy was a Spanish movie actor, screenwriter, and director working primarily in horror films. His portrayals of numerous classic horror figures—The Wolfman, Frankenstein's monster, Count Dracula, The Hunchback of Notre Dame, Fu Manchu and a mummy—earned him recognition as the Spanish Lon Chaney. He had one of the most recognizable faces in Spanish horror film. Naschy also starred in dozens of action films, historical dramas, crime movies, TV shows and documentaries. He also wrote the screenplays for most of his films and directed a number of them as well, signing many of them "Jacinto Molina". King Juan Carlos I presented Naschy with Spain's Gold Medal Award for Fine Arts in 2001 in honor of his work, the Spanish equivalent of being knighted. 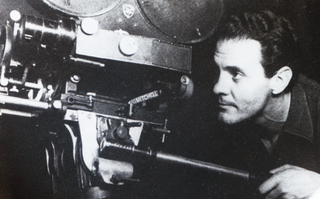 La Noche de Walpurgis, is a 1971 Spanish horror film starring Paul Naschy, the fifth in a series about the werewolf Waldemar Daninsky. This film was directed by León Klimovsky and written by Naschy, and is generally regarded to have kickstarted the Spanish horror film boom of the Seventies, due to its awesome box office success upon its release. The German distributors added the name Hans Munkel to the screenwriting credit in some versions to satisfy the terms of international co-production. Patty Shepard was so convincing as the vampiric Countess, it was thought at the time that she might replace actress Barbara Steele as Europe's reigning horror queen.

La Marca del Hombre Lobo, is a 1968 3-D Spanish horror film, the first in a long series of films about the werewolf Count Waldemar Daninsky, played by Paul Naschy. The film was also known as Hell's Creatures: Dracula and the Werewolf, The Nights of Satan and Frankenstein's Bloody Terror . Naschy claimed he followed up this film with his 1968 film Las Noches del Hombre Lobo and his 1969 film Los Monstruos del Terror.

Las Noches del Hombre-Lobo is a 1968 Spanish horror film about the werewolf Count Waldemar Daninsky, played by Paul Naschy. It has always been referred to as the second of Paul Naschy's 12 Waldemar Daninsky Werewolf movies. However, there are serious doubts as to whether the film was actually made; no one, including Naschy himself, has ever seen it. It was never theatrically released, nor has it ever turned up on video. It is considered today to be a lost film.

La Furia del Hombre Lobo, aka Wolfman Never Sleeps, is a 1972 Spanish horror film that is the fourth in a long series about the werewolf Count Waldemar Daninsky, played by Paul Naschy. It was not theatrically released in Europe until 1975, due to problems involved in finding a distributor, although it was shown edited on TV in the US in 1974. The Swedish edit called Wolfman Never Sleeps is the more complete version and contains several extra sex scenes that were edited out of all of the other versions.

Dr. Jekyll y el Hombre Lobo, also known as Dr. Jekyll and the Werewolf, is a 1972 Spanish horror film, the sixth in the series, about the werewolf Count Waldemar Daninsky, played by Paul Naschy. It was followed by a sequel, El Retorno de Walpurgis.

El Retorno de Walpurgis is a 1973 Mexican-Spanish horror film that is the seventh in a series about the werewolf Count Waldemar Daninsky, played by Paul Naschy. This film ignored the events in all of the earlier films and began a whole new origin for el Hombre Lobo. 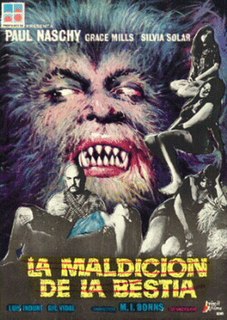 La Maldicion de la Bestia is a 1975 Spanish horror film that is the eighth in a long series about the werewolf Count Waldemar Daninsky, played by Paul Naschy. The film has also been known as The Werewolf and the Yeti, Night of the Howling Beast and Hall of the Mountain King. This film ignored the events from the earlier films The Fury of the Wolfman (1970) and Curse of the Devil (1972), and provided an all-new origin for Waldemar's lycanthropy, having the curse transmitted by the bites of not one, but two, vampire women! A yeti is woven into the storyline, but in this film the yeti is not the cause of Waldemar's lycanthropy, but rather the catalyst that brings Waldemar to Tibet in the first place.

El Retorno del Hombre Lobo is a 1980 Spanish horror film that is the ninth in a long series about the werewolf Count Waldemar Daninsky, played by Paul Naschy. In the United States, the film was released theatrically and on VHS as The Craving in 1985, and more recently on DVD and Blu-ray as Night of the Werewolf.

Tomb of the Werewolf is a 2004 film directed by Fred Olen Ray. It is the twelfth and last in a long series about the werewolf Count Waldemar Daninsky, played by Paul Naschy. The film contains a number of adult sex scenes bordering on softcore pornography.

Lawrence Stewart "Larry" Talbot, also known as The Wolf Man, is a title character of the 1941 Universal film The Wolf Man and its sequels, created by Curt Siodmak. He was portrayed by Lon Chaney Jr. In the 2010 remake of the film, he is portrayed by Academy Award-winner Benicio del Toro. The Wolf Man was part of the Universal Classic Monsters ensemble.

Patty Moran Shepard was an American-born film actress. She moved to Europe and appeared in more than fifty Spanish, Italian and French films from the 1960s to the 1980s. She died from a heart attack in 2013 at age 67. 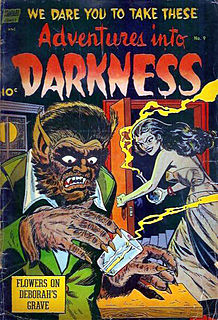 This is a list of fiction and media of all kinds of media featuring werewolves, lycanthropy and shape-shifting.

The Wolf Man is the title of several horror film series centered on Larry Talbot, a man who upon being bitten by a werewolf becomes one himself, and his subsequent attempts to cure himself of his murderous condition. The franchise was created by Curt Siodmak.