Lotus position or Padmasana (Sanskrit : पद्मासन, romanized: padmāsana) [1] is a cross-legged sitting meditation pose from ancient India, in which each foot is placed on the opposite thigh. It is an ancient asana in yoga, predating hatha yoga, and is widely used for meditation in Hindu, Tantra, Jain, and Buddhist traditions.

Variations include half lotus, bound lotus, and psychic union pose. Advanced variations of several other asanas including yoga headstand have the legs in lotus or half lotus. The pose can be uncomfortable for people not used to sitting on the floor, and attempts to force the legs into position can injure the knees. [2]

Shiva, the meditating ascetic God of Hinduism, Gautama Buddha, the founder of Buddhism, and the Tirthankaras in Jainism have been depicted in the lotus position, especially in statues. The pose is emblematic of both Buddhist meditation and of yoga, and as such has found a place in Western culture as a symbol of healthy living and well-being.

The name Padmasana is from the Sanskrit पद्म Padma, "lotus" and आसन, Āsana, "posture" or "seat". [4] [5] In Asian cultures, [6] the sacred lotus is used as a symbol of growth towards perfection and enlightenment as it is rooted in the mud at the bottom of the pond, but rises and blooms above the water. [7] In Chinese and Tibetan Buddhism, the pose is also called the "vajra position" (Skt. vajrāsana, Ch. 金剛座 jīngāngzuò). [8] [9]

The pose is ancient and is described, along with other asanas (sitting postures), in the 8th century book Patanjalayogashastravivarana. [10] A figure seated in lotus position on a lotus flower is shown on dinar coins of Chandragupta II, who reigned c. 380–c. 415 AD. [11] The first tantric text to discuss posture (asana), the 6th-10th century Nisvasattvasamhita Nayasutra (4.11-17, 4.104-106), directs the meditator and "user of mantras" to sit in lotus or a similar posture. [12] The 15th century Hatha Yoga Pradipika states that the pose destroys all diseases, and that a yogin in the pose who retains the air breathed in through the nadi channels attains liberation. [13]

From sitting cross-legged on the floor in Sukhasana, one foot is placed on top of the opposite thigh with its sole facing upward and heel close to the abdomen. The other foot is then placed on the opposite thigh as symmetrically as possible. [4] The pose requires "very open hips". [14] It can be modified using a support such as a cushion or blanket; by sitting on its forward edge, the pelvis is tilted forward. [15] [16]

In half lotus, अर्ध पद्मासन (Ardha Padmasana), one leg is bent and resting on the ground, the other leg is bent with the foot in lotus position. It is an easier meditation position than full lotus. [17]

In bound lotus, बद्ध पद्मासन (Baddha Padmasana), the practitioner sits in full lotus, and each hand reaches around the back to grasp the opposite foot. [18]

For psychic union pose, यओगमुद्रासन (Yogamudrasana), the practitioner bends forward in full lotus, bringing the forehead as close to the floor as possible. [19] The pose is both an asana and a mudra; easier variants begin from Ardha Padmasana or Sukhasana. [20]

Variations of several other asanas such as Sirsasana (yoga headstand), Sarvangasana (shoulderstand), Simhasana (lion pose), Matsyasana (fish pose), and Gorakshasana (cowherd pose) have the legs in lotus. [21] Asanas such as Vatayanasana (horse pose) and advanced forms of Ardha Matsyendrasana (half lord of the fishes pose) have one leg as in half lotus. [22]

Lotus is one of the yoga poses that most commonly causes injury. [2] [23] Attempts to force the legs into lotus pose can injure the knees by squeezing and damaging the medial meniscus cartilage; this is painful and takes a long time to heal. The hip joints must rotate outwards approximately 115 degrees to permit full lotus. Students who cannot achieve this much hip rotation may try to compensate by bending the knee joint sideways, risking injury. Rather than bending the knee, the thighs can be encouraged to rotate outwards (using hand pressure or a strap). [24]

The yoga guru B. K. S. Iyengar notes that people unused to sitting on the floor will initially feel "excruciating" pain in the knees, but that this subsides with practice, until the pose becomes relaxing, both restful and alert and hence ideal for pranayama. [25]

Twentieth century advocates of some schools of yoga, such as Iyengar, made claims for the effects of yoga on specific organs, without adducing any evidence. [26] [27] Iyengar claimed that Padmasana encourages blood circulation in the abdomen and lumbar region, toning the spine and abdominal organs. [28]

In art and culture

In Buddhism, statues of the founder, Gautama Buddha, sometimes depict him seated in lotus position and enthroned on a lotus flower. [29] [30] [31] In Hinduism, statues often depict gods, especially Shiva, meditating in Padmasana. [32] In Jainism, seated Tirthankaras are represented in Lotus posture. [33]

The scholar of religion Thomas Tweed wrote in 2008 that "the prevailing image of Buddhist practice has been the solitary meditator, eyes half closed, sitting in the lotus position." [34] Ian Fleming's 1964 novel You Only Live Twice has the action hero James Bond visiting Japan, where he "assiduously practised sitting in the lotus position." [35] The critic Lisa M. Dresner notes that Bond is mirroring Fleming's own struggles with the pose. [36] The BBC journalist Megan Lane commented in 2003 that since yoga as exercise had become mainstream, lotus position (like tree pose) had been used by advertisers to sell "all manner of goods and services." [37] She noted that both "healthy living" [37] goods such as vitamins, fitness clubs, water filter and probiotic yogurt, and unrelated items such as cars, airlines, financial services "and even beer" [37] have made use of images of yoga to convey a message of well-being. [37] Poland's Obory Dairy gave its advertising agency the goal of creating awareness of their "Jogi" yogurt as exclusive and with a positive image. The agency responded with a photograph of two young women meditating in lotus pose at dawn under the heading "Start your day with Jogi", the brand name also meaning "yoga" in Polish. [38] 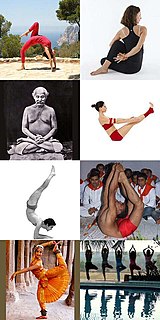 An asana is a body posture, originally and still a general term for a sitting meditation pose, and later extended in hatha yoga and modern yoga as exercise, to any type of position, adding reclining, standing, inverted, twisting, and balancing poses. The Yoga Sutras of Patanjali define "asana" as "[a position that] is steady and comfortable". Patanjali mentions the ability to sit for extended periods as one of the eight limbs of his system. Asanas are also called yoga poses or yoga postures in English. 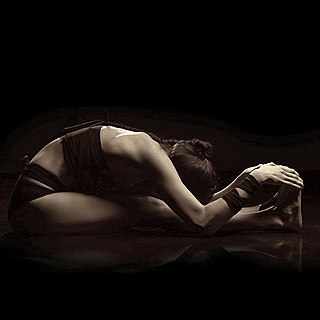 Shirshasana, Salamba Shirshasana, or Yoga Headstand is an inverted asana in modern yoga as exercise; it was described as both an asana and a mudra in classical hatha yoga, under different names. It has been called the king of all asanas.

Siddhasana or Accomplished Pose, is an ancient seated asana in hatha yoga and modern yoga as exercise suitable for meditation. The names Muktasana and Burmese position are sometimes given to the same pose, sometimes to an easier variant, Ardha Siddhasana.

Vrikshasana or Tree Pose is a balancing asana. It is one of the very few standing poses in medieval hatha yoga, and remains popular in modern yoga as exercise.

Viparita Karani or legs up the wall pose is both an asana and a mudra in hatha yoga. In modern yoga as exercise, it is commonly a fully supported pose using a wall and sometimes a pile of blankets.

Virasana or Hero Pose is a kneeling asana in modern yoga as exercise. Medieval hatha yoga texts describe a cross-legged meditation asana under the same name. Supta Virasana is the reclining form of the pose; it provides a stronger stretch. 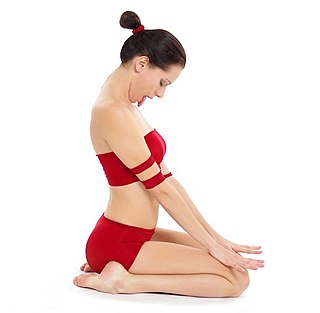 Simhasana or Lion Pose is an asana in hatha yoga and modern yoga as exercise.

Kukkutasana, Cockerel Pose, or Rooster Posture is an arm-balancing asana in hatha yoga and modern yoga as exercise, derived from the seated Padmasana, lotus position. It is one of the oldest non-seated asanas.

Garbha Pindasana, Embryo in Womb Pose, sometimes shortened to Garbhasana, is a seated balancing asana in hatha yoga and modern yoga as exercise.

Ardha Chandrasana or Half Moon Pose is a standing asana in modern yoga as exercise.

Baddha Konasana, Bound Angle Pose, Butterfly Pose, or Cobbler's Pose, and historically called Bhadrasana, Throne Pose, is a seated asana in hatha yoga and modern yoga as exercise. If the knees rest on the floor, it is suitable as a meditation seat.

Matsyendrasana, Matsyendra's Pose or Lord of the Fishes Pose, is a seated twisting asana in hatha yoga and modern yoga as exercise. The full form is the difficult Paripurna Matsyendrasana. A common and easier variant is Ardha Matsyendrasana. The asana usually appears as a seated spinal twist with many variations, and in its half form is one of the twelve basic asanas in many systems of hatha yoga. 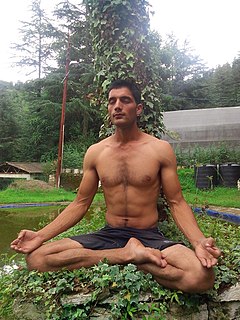 Meditative postures or meditation seats are the body positions or asanas, usually sitting but also sometimes standing or reclining, used to facilitate meditation. Best known in the Buddhist and Hindu traditions are the lotus and kneeling positions; other options include sitting on a chair, with the spine upright.

Marichyasana is a sitting twist asana in modern yoga as exercise, in some forms combined with a forward bend. 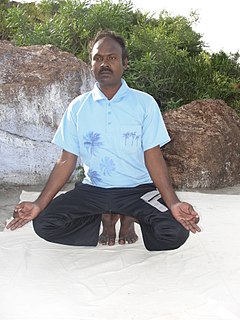 Gorakshasana is a seated asana in hatha yoga. It has been used for meditation and in tantric practice. 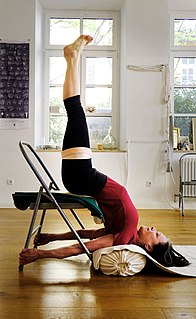 Props used in yoga include chairs, blocks, belts, mats, blankets, bolsters, and straps. They are used in postural yoga to assist with correct alignment in an asana, for ease in mindful yoga practice, to enable poses to be held for longer periods in Yin Yoga, where support may allow muscles to relax, and to enable people with movement restricted for any reason, such as stiffness, injury, or arthritis, to continue with their practice.