Louis Archinard (11 February 1850 – 8 May 1932) was a French Army general at the time of the Third Republic, who contributed to the colonial conquest of French West Africa. He was traditionally presented in French histories as the conqueror and "Pacifier" of French Soudan (today Mali). Archinard's campaigns brought about the end of the Tukulor Empire. He also spent a large amount of energy fighting Samory Toure.

Archinard was succeeded as military commander of the Sudan in 1893 by Eugène Bonnier, who left from Bordeaux on 5 August 1893 to take up his new command. Bonnier had no instructions and decided to follow Archinard's advice, use his own judgement and seize Timbuktu. [1] He was killed on 15 December 1893 by a force of Tuaregs. [2]

In 1897 Archinard was reassigned to French Indochina. In World War I, he commanded in August 1914 the 1er Group of Reserve Divisions, and in 1917-1918 the Polish Legion in France. 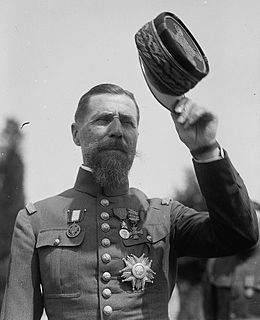 Henri Joseph Eugène Gouraud was a French general, best known for his leadership of the French Fourth Army at the end of the First World War.

Louis Félix Marie François Franchet d'Espèrey was a French general during World War I. As commander of the large Allied army based at Salonika, he conducted the successful Macedonian campaign, which caused the collapse of the Southern Front and contributed to the armistice.

Charles Emmanuel Marie Mangin was a French general during World War I.

Edgard de Larminat was a French general, who fought in two World Wars. He was one of the most important military figures who rejoined the Free French forces in 1940. He was awarded the Ordre de la Libération.

Augustin Yvon Edmond Dubail was a French Army general. He commanded the First Army and Army Group East during World War I.

Darius Paul Dassault born Darius Paul Bloch was a French general who was in the French Résistance in World War II. 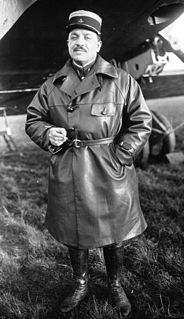 General Joseph Vuillemin was a French military aviator who took part in both world wars. He was Chief of Staff of the French Air Force during the first year of World War II. 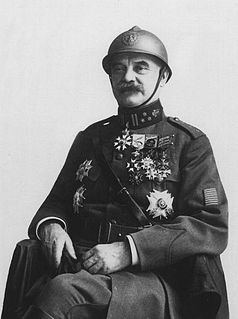 Armand Léopold Théodore, Baron de Ceuninck was the Minister of War of Belgium, serving in the last year of World War I. 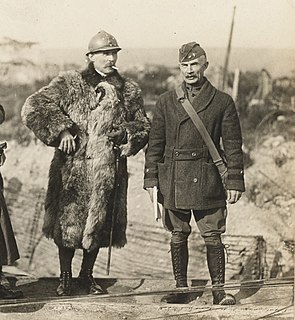 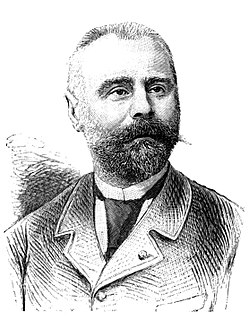 Louis Albert Grodet was a French civil servant, colonial administrator and politician. He trained as a lawyer, then worked his way up the ranks in the Ministry of Commerce and then the Colonial Ministry. He was governor in turn of Martinique, French Guiana, French Sudan, French Congo and French Guiana for a second term. Although forceful, he lacked leadership skills and had poor judgement. In the French Sudan he was unable to stop the army from ignoring government instructions and pursuing a costly expansionist policy. He tried but failed to suppress slavery, at a time when the local troops often expected a share of booty in the form of slaves. After retiring he was Deputy of French Guiana from 1910 to 1919.

Tite Pierre Marie Adolphe Eugène Bonnier was a French soldier. He served in New Caledonia, Senegal and Tonkin. He and most of the men in his column were killed by a force of Tuaregs in a dawn massacre outside Timbuktu in what is now Mali.