Louis Hervé Coatalen (11 September 1879 – 23 May 1962) [1] was an automobile engineer and racing driver born in Brittany who spent much of his adult life in Britain and took British nationality. He was a pioneer of the design and development of internal combustion engines for cars and aircraft.

Coatalen, the second son of J Coatalen, was born in the Breton fishing town of Concarneau and went on to study engineering at Arts et Métiers ParisTech, in the town of Cluny [1] (France).

After serving his apprenticeship with De Dion-Bouton, Clément and Panhard et Levasseur he left France to work in England in 1900. After a short time with the Crowden Motor Car Company he joined Humber Limited in 1901 [2] and was to become their chief engineer.[ citation needed ] He designed their 8-10 and 10-12 models. They were highly successful but their design was, unusually for Coatalen, totally conventional. [3]

In 1906 aged 26 or 27 he went into partnership with bicycle manufacturer William Hillman. In 1908 he drove their Hillman-Coatalen car in the Isle of Man Tourist Trophy race. [2]

The brief partnership was dissolved in 1909 and Coatalen moved from Coventry to Wolverhampton to join Sunbeam. He was appointed joint managing director (with William M Iliff) in 1914. [4]

His first design was one of the outstanding light car designs of its day. In 1912 three 12-16s took the first three places in Dieppe's Coupe de l'Auto 2-day race for 3-litre cars. The first of the three cars was also third in the race for Grand Prix cars. But his designs rapidly became less innovative and he seemed to copy Peugeot developments rather than use his own. [2]

Sunbeam cars won the Tourist Trophy races in 1914 and 1922. The Sunbeam cars that took the first three places in the 1923 French Grand Prix were said to have owed much to Fiat designs. [2]

During World War I he designed aircraft engines for Sunbeam. On his death in 1962 Lord Sempill wrote to The Times to point out that Coatalen was one of the three leading designers of engines for aircraft and airships used by the RNAS in the First World War. The other two, he said, were W O Bentley and Sir Henry Royce. [5]

Sunbeam produced a greater variety of aero engines than any other business during the war. W O Bentley said this was "in part because Coatalen was so good at selling ideas to the Admiralty and War Office." [3]

He was appointed a director of STD Motors when In 1920 Sunbeam joined with Clément-Talbot and Darracq to form STD Motors Limited, but he remained chief engineer of Sunbeam. [6] He was later put in charge of the technical and designing staffs of all STD subsidiaries. [7]

With the success of 1.5 litre Talbot-Darracq cars, his main interest became racing cars. Their wins catapulted Sunbeam to the highest echelons of international competition from the legendary success at the 1912 Coupe de l’Auto to winning the 1914 and 1922 Tourist Trophy and 1923 and 1924 Grand Prix. Coatelen collaborated with the industry foremost designer Ernest Henry on the 1922 Grand Prix Sunbeams and had some of the most respected drivers of the period – Henry Segrave, Jean Chassagne and Kenelm Lee Guinness driving his Sunbeam cars.

In 1926, Sunbeam's racing activities were taken into the STD company and moved to Suresnes near Paris in France and although Coatalen continued working part-time in Wolverhampton, he spent most of his time in Paris.[ citation needed ]

On his direction, Sunbeam was among the first British manufacturers to provide front wheel brakes. [2] Coatalen's innovations included balancing the wheels (a technique also claimed by Sig Haugdahl) and putting the oil pump in the sump, and he was an early advocate of shock absorbers. [8]

From the proceeds of his S T D share sale, Coatalen bought control of the French branch of Lockheed hydraulics and with the income from this bought a yacht and a villa on the Isle of Capri. [1]

During the Second World War he lived in France and he continued living there until his sudden death in Paris in 1962 aged 82. [2]

Louis Coatalen married four times: in 1902 to Annie Ellen Davis (divorced 1906), in 1910 to Olive Bath (daughter of a Sunbeam director, Henry J Bath), in 1923 to Iris van Raalte, née Graham, and in 1934 to Ellen Bridson known to family as Dickie.[ citation needed ] There is no record of a marriage to a member of the Hillman family.

Following the publication of Coatalen's obituary, Sunbeam expert Anthony S Heal wrote to The Times to describe Coatalen as an impresario of the motor industry. "He led and inspired others to achieve miracles they themselves would not have thought possible." [5]

W O Bentley described him as "not only a first class businessman who made (and lost) a great deal of money in his active life with Sunbeams; he had other qualities which I liked even better; he was highly educated and amusing and a tremendous raconteur, and he was dedicated to motor racing". [3] 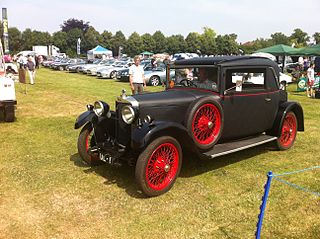 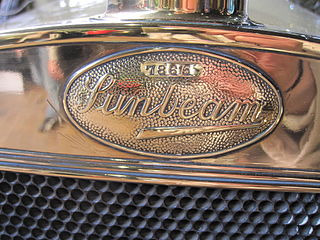 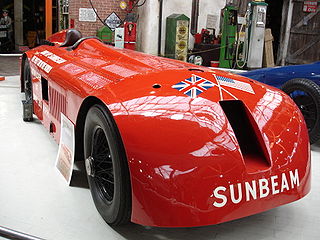 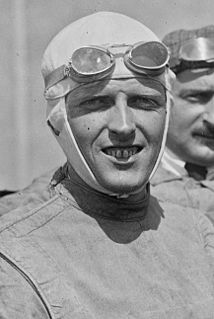 The 1925 24 Hours of Le Mans was the 3rd Grand Prix of Endurance, and took place on 20 and 21 June 1925. It was the last of the three races spanning 1923 to 1925 to determine the winner of the Rudge-Whitworth Triennial Cup, as well the second race of the inaugural Biennial Cup.

Jean Chassagne was a pioneer submariner, aviator and French racecar driver active 1906-1930. Chassagne finished third in the 1913 French Grand Prix; won the 1922 Tourist Trophy and finished second in the 1925 Le Mans Grand Prix d'Endurance - all in Sunbeam motorcars. He was second in the 1921 Italian Grand Prix with a Ballot, and set speed records and won races at Brooklands and hill climbs internationally. 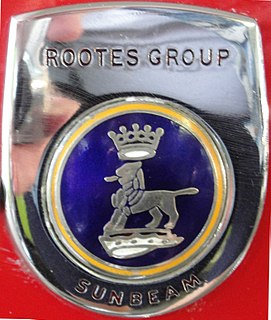 Kenelm Edward Lee Guinness MBE was an Irish-born racing driver of the 1910s and 1920s mostly associated with Sunbeam racing cars. He set a new Land Speed Record in 1922. Also an automotive engineer, he invented and manufactured the KLG spark plug. A member of the Guinness brewing family, and a director of the company, he lived and died in Putney Vale, and was buried at the nearby cemetery, bordering Putney Heath. 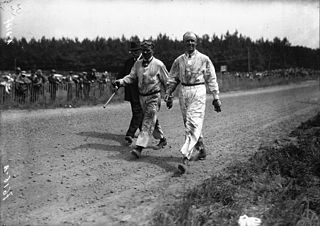 The 1923 Grand Prix season was part of a watershed year for motor racing that saw significant advances in motor-racing engineering, design and events. Fiat's chief designer, Guido Fornaca, developed the 805, the first supercharged car to win a Grand Prix. Benz appeared with the first mid-engined racer and, along with Bugatti and Voisin, produced some of the first efforts at aerodynamics on racing cars. With the United States also adopting the 2-litre formula, Harry Miller could use the smaller engine size to design the first single-seater race-car, ideally suited to American oval racing.

The Sunbeam 3-litre is a heavy 26 long cwt sports car introduced by Sunbeam in October 1925 at the London Motor Show, and was offered from 1926 until 1930. It was seen at the time and subsequently as the retort of Louis Hervé Coatalen, Sunbeam's energetic chief engineer, to the Bentley 3 Litre which by then was beginning to make its mark, having won at Le Mans earlier that year. 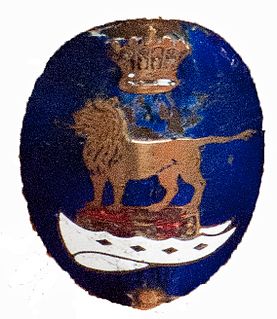 Clément-Talbot Limited was a British motor vehicle manufacturer with its works in Ladbroke Grove, North Kensington, London, founded in 1902. Rootes renamed it Sunbeam-Talbot Limited in 1938.

Antonio Franco Lago, known as Anthony Lago or Tony Lago, was an Italian engineer and motor-industry entrepreneur. In 1936 he bought Automobiles Talbot S.A. from his employers, the collapsed Anglo-French S.T.D. Motors combine, and founded the motor-racing marque Talbot-Lago. 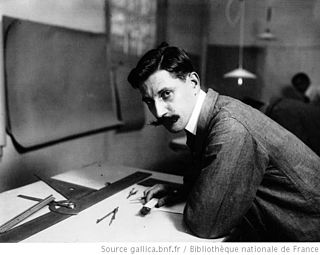 Ernest Henry was a mechanical engineer. He developed auto racing engines, and is especially well known for his work for Peugeot and Ballot, who dominated Grand Prix auto racing from 1912 to 1921. His engine design directly influenced Sunbeam Racing cars as early as 1914; the 1921 Grand Prix Sunbeams owe much to his work with Ballot and the 1922 Grand Prix Sunbeams were designed by him. 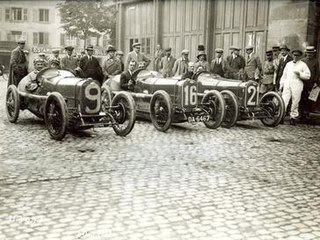 Sunbeam Works Racing cars participated in the 1922 XVI Grand Prix de l'A.C.F. in Strasbourg. The race took place on 15 July 1922 and was run to a formula stipulating that maximum engine capacity should not exceed 2 litres and that the cars should be two-seaters weighing not less than 650 kg. The formula was to remain in force for four years producing "fields of brilliance to be unequalled for many years" it was the first rolling massed start in the history of Grand Prix motor-racing.

The 1921 S.T.D. ‘Works’ Grand Prix chassis was built to the three-litre and minimum weight of 800 kilogrammes formula for that year's Indianapolis 500 and French Grand Prix de l’A.C.F.. These team cars were modified by the Works for the 1922 Isle of Man Tourist Trophy, which was won by one of the cars. A few months later, and with 1916 4.9-litre engines, two of the T.T. cars competed in the Coppa Florio, Sicily and gained second and fourth position.

Automobiles Darracq France was a manufacturer of motor vehicles and aero engines in Suresnes, near Paris. The enterprise, known at first as A Darracq et Cie, was founded in 1896 by successful businessman Alexandre Darracq.

Automobiles Talbot France manufactured cars in Suresnes, near Paris, France. The enterprise was founded by Alexandre Darracq in February 1897. In 1902 he sold it into British control. The (subsidiary) company first known as Automobiles Darracq S.A. was formed in 1916 by London company A Darracq and Company (1905) Limited.