He was born in Brest, France. In Paris, where he resided with his family, he was enrolled in the Montaigne and Louis-le-Grand secondary schools. A bilingual secretary in several maritime agencies, he collaborated, starting from 1904, in a Parisian sports journal. After his studies of law and oriental languages in the Sorbonne, he moved to London.

In 1911, he moved to Canada, settling initially in Montreal. Hémon wrote Maria Chapdelaine during his time working at a farm in the Lac Saint-Jean region.

Hémon died when he was struck by a train at Chapleau, Ontario. He never saw the widespread publication of his landmark novel.

Since his death, Maria Chapdelaine has been translated into more than 20 languages in 23 countries, [1] while other novels were published posthumously. The work was also celebrated through a series of paintings by renowned Canadian artist, Rajka Kupesic.

Hémon had one daughter, Lydia-Kathleen, from a relationship in England with Lydia O'Kelly.

Valentin Louis Georges Eugène Marcel Proust was a French novelist, critic, and essayist who wrote the monumental novel À la recherche du temps perdu, published in seven parts between 1913 and 1927. He is considered by critics and writers to be one of the most influential authors of the 20th century. 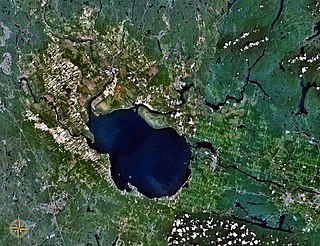 Lac Saint-Jean is a large, relatively shallow lake in south-central Quebec, Canada, in the Laurentian Highlands. It is situated 206 kilometres north of the Saint Lawrence River, into which it drains via the Saguenay River. It covers an area of 1,053 km2 (407 sq mi), and is 63.1 m (207 ft) at its deepest point. Its name in the Innu language is Piekuakami. 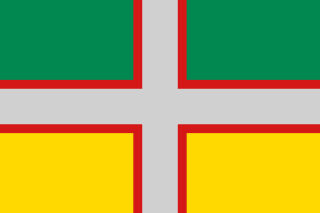 Saguenay–Lac-Saint-Jean is a region in Quebec, Canada. It contains the Saguenay Fjord, the estuary of the Saguenay River, stretching through much of the region. It is also known as Sagamie in French, from the first part of "Saguenay" and the last part of "Piekouagami", the Innu name for Lac Saint-Jean, with the final "e" added to follow the model of other existing region names such as Mauricie, Témiscamie, Jamésie, and Matawinie. The name Saguenay is possibly derived from the Innu word "Saki-nip" which means "where water flows out". With a land area of 98,712.71 km2, the Saguenay–Lac-Saint-Jean is, after the Nord-du-Québec and Côte-Nord regions, the third-largest of Quebec regions in the area.

Louis-Honoré Fréchette,, was a Canadian poet, politician, playwright, and short story writer. For his prose, he would be the first Quebecois to receive the Prix Montyon from the Académie française, as well as the first Canadian to receive any honor of this kind from a European nation.

Gabriel Sagard, O.M.R., was a French lay brother and Recollect friar, a reform branch of the Order of Friars Minor known for their strict poverty. He was among the first Christian missionaries to New France, and is notable for his writings on the colony and on the Hurons.

Péribonka is a municipality in the Canadian province of Quebec, located in the Maria-Chapdelaine Regional County Municipality. It is situated at the mouth of the Peribonka River where it forms a bay on the north shore of Lac Saint-Jean.

Louis Pergaud was a French novelist, war poet, and soldier, whose principal works were known as "Animal Stories" due to his featuring animals of the Franche-Comté in lead roles. His most notable work was the novel La Guerre des boutons (1912). It has been reprinted more than 30 times, and is included on the French high-school curriculum.

Maria Chapdelaine is a romance novel written in 1913 by the French writer Louis Hémon, who was then residing in Quebec. Aimed at French and Quebec adolescents, the book had been included in school curricula, translated, and has been extensively analyzed and adapted.

The Peribonka River is a river emptying in Sainte-Monique, in Lac-Saint-Jean-Est Regional County Municipality, in the Saguenay-Lac-Saint-Jean area in Quebec, Canada. It is 451 kilometres (280 mi) long and drains an area of 28,200 square kilometres (10,900 sq mi). It drains into Lac Saint-Jean at Pointe-Taillon National Park and is the largest tributary of this lake. The town of Péribonka is located on the north shore of Lac St-Jean at the river's mouth.

The Naked Heart is a 1950 British-French historical drama film directed by Marc Allégret, based on the novel Maria Chapdelaine by Louis Hémon. The film stars Michèle Morgan, Kieron Moore and Françoise Rosay. It was released in separate English and French versions. A previous film version had been made in 1934.

Clarence Alphonse Gagnon, was a French Canadian painter, draughtsman, engraver and illustrator, from the province of Quebec. He is well known for his landscape paintings of the Laurentians and the Charlevoix region of eastern Quebec.

Maria Chapdelaine is a 1913 novel set in Quebec by French writer Louis Hémon that served as the basis for films, plays, TV series, etc.

Maria Chapdelaine is a Canadian historical drama film, released in 1983. An adaptation of Louis Hémon's novel Maria Chapdelaine, the film was directed by Gilles Carle and starred Carole Laure in the title role.

Maria Chapdelaine is a 1934 French drama film directed by Julien Duvivier and starring Madeleine Renaud, Jean Gabin and Jean-Pierre Aumont. It is an adaptation of the 1913 novel of the same title by Louis Hémon set in rural Quebec about a young woman who becomes involved with a farmer, trapper and an immigrant drifter from Paris. The story was adapted again for a 1950 film directed by Marc Allégret.

Alfred Duclos DeCelles was a Canadian journalist, writer, lawyer and librarian. For thirty-five years, from 1885 to 1920, he was the head of the Parliamentary Library in Ottawa. He often signed his name as A.D. DeCelles. 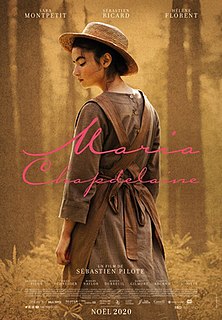 Maria Chapdelaine is a Canadian drama film, directed by Sébastien Pilote and scheduled for release on September 24, 2021. An adaptation of Louis Hémon's 1913 novel Maria Chapdelaine, the film stars Sara Montpetit as the titular Maria Chapdelaine, a young woman in rural Péribonka, Quebec, who is torn between three suitors: François Paradis, a coureur de bois; Eutrope Gagnon, a local farmer; and Lorenzo Surprenant, a wealthy man who offers the promise of life in the United States.