He was the elder brother of Bonaparte's aide de camp in Egypt Thomas Prosper Jullien. He became a supernumerary student of artillery on 16 August 1781, a student on 18 January the following year, and a lieutenant on 1 September 1783. He served in the 1st Artillery Regiment (La Fère). He became a captain and second in command of the 5th Artillery Regiment on 1 April 1791 and then adjutant general on 1 Mary 1792, adjutant general and chef de bataillon on 10 pluviôse year II, and adjudant-général chef de brigade on 25 prairial year III. 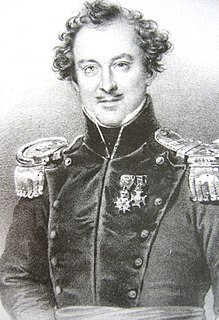 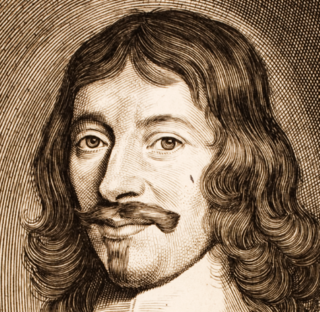 Claude de Mesmes, comte d'Avaux (1595–1650) was a 17th-century French diplomat and public administrator. He was sent in various missions to Venice, Rome, Germany, Sweden, Denmark, and Poland by Richelieu.

Philippe Contamine is a French historian of the Middle Ages who specialises in military history and the history of the nobility.

Jean Boudet was a French général de division of the French Revolutionary Wars and the Napoleonic Wars. The campaigns in which he was involved include the Saint-Domingue expedition. He was made a grand officer of the Légion d'honneur on 2 June 1809 and a knight of the Order of the Iron Crown, as well as a Comte de l'Empire in 1808. His name is engraved on the 16th column of the east side of the Arc de Triomphe in Paris. 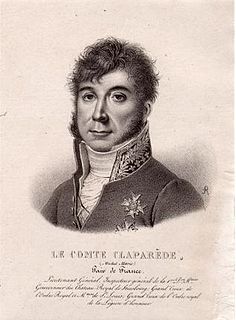 Michel Marie Claparède was a French general. His name is engraved on the Arc de Triomphe.

Jean-Baptiste Broussier was a French Divisional General of the French Revolutionary Wars and Napoleonic Wars.

Jean-Girard Lacuée, count of Cessac, near Hautefage-la-Tour in the arrondissement of Agen, 4 November 1752 - Paris, 18 June 1841) was a French general and politician, peer of France and Minister for War under Napoleon I of France. His name is inscribed on the south side of the Arc de Triomphe.

Jean Ambroise Baston de Lariboisière, also Count de Lariboisière, was a general of artillery of the First French Empire. He fought in the French Revolutionary Wars and the Napoleonic Wars and died of fatigue at Königsberg in East Prussia on 21 December 1812, during the Grand Army's retreat from Moscow.

Pierre David Édouard de Colbert-Chabanais was a general of the French Revolutionary Wars and Napoleonic Wars, noted for his unbreakable loyalty to Napoleon I.

The Monster Mortar was one of the largest mortars ever developed. Also called Leopold or the Liege mortar, the 24 inches (610 mm) caliber mortar was conceived by the French artillery officer Henri-Joseph Paixhans. The mortar was manufactured under the direction of the Belgian Minister of War Baron Louis Evain and cast at the Belgian royal foundry in Liège, Belgium in 1832. It saw action at the Battle of Antwerp in December 1832. 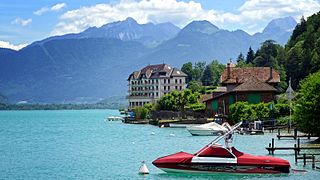 This page shows the coats of arms, heraldic achievements, and heraldic flags of the House of Nassau.

Henri César Auguste Schwiter was a French general in the Revolutionary and Napoleonic Wars. He was also notable as a patron of the painter Eugène Delacroix.

Jean-François-Madeleine de Gentil was a French officer who participated to the French conquest of Algeria.