Lovre Knežević (born 22 July 1998) is a Croatian professional footballer who plays as a midfielder for Bulgarian First League club Etar.

He has previously played for Lučko, Hrvatski Dragovoljac and Zadar in the Croatian Second League, for Kufstein in Austria and Beltinci in Slovenia.

Lovre Vulin is a Croatian footballer who plays as a defender who is currently playing for NK Pakoštane.

Dario Knežević is a former Croatian footballer who played as a defender.

Ivan Vargić is a Croatian footballer who plays as a goalkeeper for Slovenian club FC Koper.

Josip Knežević is a Croatian international footballer, who plays for Puskás Akadémia. 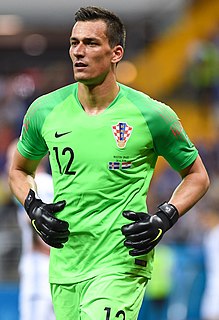 Lovre Kalinić is a Croatian professional footballer who plays as a goalkeeper for Prva HNL club Hajduk Split, on loan from Premier League club Aston Villa, and the Croatia national team.

Mijo Caktaš is a Croatian professional footballer who plays as an attacking midfielder for Hajduk Split in the Croatian First Football League.

Lovre is both a surname and a masculine given name. Notable people with the name include:

Lovre Bašić is a Croatian professional basketball player currently playing for Liège Basket in the Belgian League. Standing at 1.90 m, he plays at the point guard position.

The Lenuci Horseshoe or the Green Horseshoe is a U-shaped system of city squares with parks in downtown Zagreb, Croatia. The horseshoe was conceived in 1882 by Croatian urbanist Milan Lenuci. The parks were designed between 1883 and 1887, at a time when today's Donji grad formed the southern outskirts of Zagreb. The construction was helped by the efforts to rebuild the city after the 1880 Zagreb earthquake, and in 1889 the entire horseshoe was finished—its two ends were connected by the newly built Zagreb Botanical Garden. The park system consists of seven squares aligned on three straight lines.

The Football Oscar is an annual football award given by the Croatian Association Football Union and Sportske novosti since 2013. In the 2017 edition the award was renamed as Trophy Footballer. It is awarded to the best football player, manager and goalkeeper playing in the Croatian First League. Also, it is awarded to the best overall Croatian player at the end of every season. The best 11 Prva HNL players of the season are also selected. The award is chosen by players and managers of the Croatian league clubs.

Hurstville ZFC is a soccer club based in the suburban district of St George, New South Wales, Australia. The club currently competes in the NSW State League. Being an Australian soccer club of Croatian heritage, it is affiliated and syndicated with the Croatian Soccer Association of Australia as well as Football Federation Australia.

ŽNK Split is a Croatian women's association football club based in Split. The club was founded in 2009 and it currently competes in the Croatian First Division.

Lovre Čirjak is a Croatian football player who plays as a winger.

Stefan Knezevic is a Swiss professional footballer who plays as a centre-back for Luzern in the Swiss Super League.

Lovre Brečić is a Croatian taekwondo athlete. He won the gold medal at the 2018 European Taekwondo Championships on the bantamweight (-63 kg) category.

The House of Knežević was a Croatian noble family, descending from the medieval village of Broćno (Brotnjo) at Čitluk, Herzegovina. First mentioned there in the 15th century, family moved in the second half of the century towards northwest, where the members of the family gained new estates from the king Matthias Korvin in Gračac and Grab in the Lika Region. During the following centuries, they were appointed to various military and other services in the Habsburg Monarchy army. At the beginning of the 19th century some of the distinguished family members, being notable high-ranking army officers, moved to Međimurje, the northernmost part of Croatia, where they acquired new possessions. The last of them, Ivo Knežević, died in 1924 without leaving a successor.