Lubaba was a member of the Hilal tribe, a branch of the Banu 'Amir who were prominent in Mecca. (This tribe was distinct from the Quraysh.)

Her father was Al-Harith ibn Hazan ibn Jubayr ibn Al-Hazm ibn Rubiya ibn Abdullah ibn Hilal ibn Amer ibn Saasaa Al-Hilali and her mother was Hind bint Awf ibn Zuhayr ibn Al-Harith. [1] Lubaba had two brothers [2] and a sister from this marriage, and her father also had three daughters by another wife, while her mother had one son by a former husband. [3] Al-Harith died while Lubaba was still a child, and Hind then married Khuzayma ibn Al-Harith Al-Hilali. This marriage produced one daughter [4] but was short-lived, and Hind next married Umays ibn Ma'ad Al-Khathmi, by whom she had three further children. [5]

Lubaba claimed to be the second woman to convert to Islam, the same day as her close friend Khadijah. She and her sisters were very prominent in the early Muslim community. Muhammad commented on their family effort: "The faithful sisters are Asma and Salma, daughters of Umays, and Lubaba and Maymuna, daughters of Al-Harith."

Abbas had kept his Islam secret in 622, so he and Lubaba remained in Mecca when other Muslims emigrated to Medina.

When the news of the Meccan defeat at the Battle of Badr arrived in Mecca in 624, there was general consternation; but Abbas's Muslim freedman, Abu Rafi, could not contain his joy. Abbas's brother Abu Lahab was so furious that he assaulted Abu Rafi, knocking him to the ground and then kneeling on top of him to continue beating him. Several able-bodied men witnessed or were in calling distance of this attack, but it was Lubaba who grabbed a tent-pole and cracked it across Abu Lahab’s head, asking, “Do you think it’s all right to attack him because Abbas is absent?” Abu Lahab's head was split open, exposing his skull; When he died a week later, it was said to be of an infection, ulcer, or the plague. [7]

A few months later, Lubaba was the subject of a love-song by the Jewish poet Ka'b ibn al-Ashraf.

Are you off without stopping in the valley and leaving Umm Fadl in Mecca? Out would come what she bought from the pedlar, her bottles, henna and hair-dye. What lies between elbow and ankle is in motion when she tries to stand up and does not. Like Umm Hakim when she was with us, the bond between us strong and unbreakable. She is the one Amirite who bewitches my heart, and if she wished, she could cure my sickness. The glory of women and of a people is their father, a people held in honour, true to their oath. Never did I see the sun rise at night till I saw her display herself to us in the darkness of the night! [8]

The song is almost certainly sarcastic, as the Amir tribe were Ka'b's traditional enemies and, in his perception, the reverse of "honourable" or "trustworthy". The reference to pedlar's products in the third and fourth lines, and to wobbling flesh in the fifth and sixth, presumably indicates that Lubaba was plump, painted and middle-aged (although she was probably under thirty). [9]

Abbas officially accepted Islam just before the conquest of Mecca in 630, twenty years after his wife.

Lubaba died during the caliphate of Uthman. 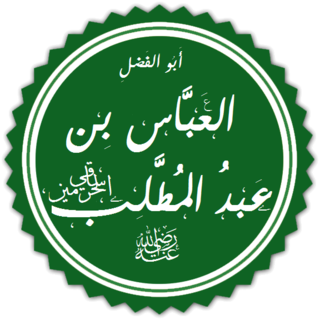 Al-Abbas ibn Abd al-Muttalib was paternal uncle and Sahabi (companion) of Muhammad, just three years older than his nephew. A wealthy merchant, during the early years of Islam he protected Muhammad while he was in Mecca, but only became a convert after the Battle of Badr in 624 CE (2 AH). His descendants founded the Abbasid dynasty in 750. 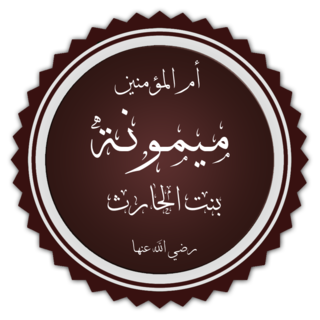 Maymunah bint al-Harith al-Hilaliyah, was a wife of Muhammad. Her original name was Barrah, but Muhammad changed it to Maymunah, meaning "good tidings", as his marriage to her marked the first time in seven years when he could enter his hometown of Mecca.

Usama ibn Zayd was an early Muslim and companion of the Islamic prophet Muhammad.

Zaynab bint Amir al-Kinaniyya, better known as Umm Ruman, was a wife of the first caliph Abu Bakr and mother of Abd al-Rahman and Aisha.

Asmāʾ bint ʿUmays was a companion of the Islamic prophet Muhammad. She is known for having married three companions of the Prophet: Ja'far ibn Abi Talib, Abu Bakr and Ali.

ʿAbd al-ʿUzzā ibn ʿAbd al-Muṭṭalib , often known as Abū Lahab was Muhammad's half paternal uncle. He was one of the Meccan Quraysh leaders who opposed Muhammad and his followers and was condemned in the surah Lahab of the Quran for antagonizing Islam.

Ikrima ibn Amr ibn Hisham al-Makhzumi was a leading opponent-turned companion of the Islamic prophet Muhammad and a Muslim commander in the Ridda wars and the conquest of Syria. In the latter campaign, he was slain by Byzantine forces.

Fadl ibn Abbas (611-639) was a brother of Abdullah ibn Abbas and was a cousin of the Islamic prophet Muhammad. 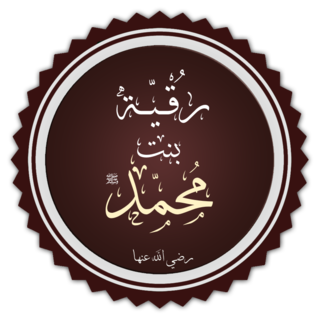 Ruqayyah bint Muhammad, was the second eldest daughter of the Islamic prophet Muhammad and Khadija. She married the third caliph Uthman and the couple had a son Abdullah. In 624, Ruqayyah died from an illness.

Salma bint Umays was a sahaba of Muhammad.

Utbah ibn Abi Lahab was a first cousin of the Islamic prophet Muhammad.

Jumanah bint Abi Talib was a companion and first cousin of the Islamic prophet Muhammad.

Hind bint Awf was Muhammad's mother-in-law and Ibn Abbas' and Khalid ibn al-Walid 'grandmother. As the mother of several companions of Muhammad, she was known as the "grandest mother-in-law on earth".

Following the migration and return of the most Sahabas from the first migration to Abyssinia, the Muslims continued to suffer Persecution by the Meccans. This time, in 6 BH (615 CE) almost one hundred Muslims made a second migration back to Ethiopia where they stayed protected. 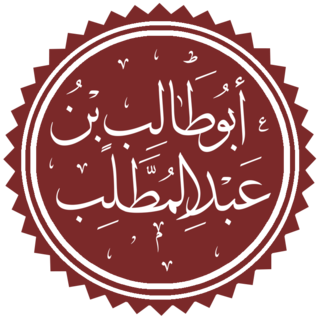 Abu Talib ibn Abd al-Muttalib was the second chief of the Banu Hashim clan of the Quraysh. He was the father of the fourth caliph Ali and an uncle of the Islamic prophet Muhammad. Following the death of his father Abd al-Muttalib, Abu Talib inherited the offices of Siqaya and Rifada. He was well-respected in Mecca, despite a declining fortune.

Umm Kulthum was the third daughter of the Islamic prophet Muhammad by his first wife Khadijah bint Khuwaylid. 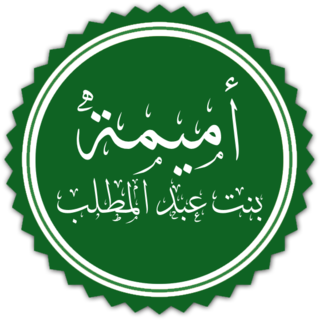 Umaymabint Abd al-Muttalib was a paternal aunt of Muhammad.

Mulayka bint Jarwal, also known by the kunya Umm Kulthum, was a wife of Umar and a companion of the Islamic prophet Muhammad.

Qurayba "the Younger" bint Abi Umayya, a companion of the Islamic prophet Muhammad, was in succession a wife of Umar, the second Caliph and of Muawiyah.