Lublin Voivodeship, or Lublin Province [2] (in Polish, województwo lubelskie [vɔjɛˈvut͡stfɔ luˈbɛlskʲɛ] ), is a voivodeship, or region, located in southeastern Poland. It was created on January 1, 1999, out of the former Lublin, Chełm, Zamość, Biała Podlaska and (partially) Tarnobrzeg and Siedlce Voivodeships, pursuant to Polish local government reforms adopted in 1998. The region is named after its largest city and regional capital, Lublin, and its territory is made of four historical lands: the western part of the voivodeship, with Lublin itself, belongs to Lesser Poland, the eastern part of Lublin Area belongs to Red Ruthenia, and the northeast belongs to Polesie and Podlasie.

The Polish historical region that encompasses Lublin, and approximates Lublin Voivodeship as it was before the Partitions of Poland, is known as Lubelszczyzna. Provinces centred on Lublin have existed throughout much of Poland's history; for details see the section below on Previous Lublin Voivodeships.

The region was, before World War II, one of the world's leading centres of Judaism. Before the middle of the 16th century, there were few Jews in the area, concentrated in Lublin, Kazimierz Dolny, and perhaps Chełm; but the founding of new private towns led to a large movement of Jews into the region to develop trade and services. Since these new towns competed with the existing towns for business, there followed a low-intensity, long-lasting feeling of resentment, with failed attempts to limit the Jewish immigration. The Jews tended to settle mostly in the cities and towns, with only individual families setting up businesses in the rural regions; this urban/rural division became another factor feeding resentment of the newly arrived economic competitors. By the middle of the 18th century, Jews were a significant part of the population in Kraśnik, Lubartów and Łęczna.

By the 20th century, Jews represented greater than 70% of the population in eleven towns and close to 100% of the population of Laszczów and Izbica. From this region came both religious figures such as Mordechai Josef Leiner of Izbica, Chaim Israel Morgenstern of Puławy, and Motele Rokeach of Biłgoraj, as well as famous secular authors Israel Joshua Singer. Israel's brother, the Nobel prize winner Isaac Bashevis Singer, was not born in Biłgoraj but lived part of his life in the city. The "Old Town" of the city of Lublin contained a famous yeshiva, Jewish hospital, synagogue, cemetery, and kahal, as well as the Grodzka Gate (known as the Jewish Gate).

Before the war, there were 300,000 Jews living in the region, which became the site of the Majdanek concentration camp and Bełżec extermination camp as well as several labour camps (Trawniki, Poniatowa, Budzyn, Puławy, Zamość, Biała Podlaska, and the Lublin work camps Lipowa 7 camp , Flugplatz, and Sportplatz) which produced military supplies for the Wehrmacht and Luftwaffe). This was once one of the biggest forced labour centres in occupied Europe, with approximately 45,000 Jewish prisoners. As well, the Sobibór extermination camp was located in the Lublin Voivodeship. After the war, the few surviving Jews largely left the area; today there is some restoration of areas of Jewish historical interest, and a surge of tourism by Jews seeking to view their families' historical roots.

The voivodeship contains 48 cities and towns. These are listed below in descending order of population (according to official figures for 2019: [3]

Protected areas in Lublin Voivodeship include two National Parks and 17 Landscape Parks. These are listed below.

The Gross domestic product (GDP) of the province was 18.5 billion euros in 2018, accounting for 3.7% of Polish economic output. GDP per capita adjusted for purchasing power was 14,400 euros or 48% of the EU27 average in the same year. The GDP per employee was 54% of the EU average. Lublin Voivodship is the province with the lowest GDP per capita in Poland. [4]

Most common surnames in the region

Lublin Voivodeship (Latin : Palatinatus Lublinensis; Polish : Województwo Lubelskie) was an administrative region of the Kingdom of Poland created in 1474 out of parts of Sandomierz Voivodeship and lasting until the Partitions of Poland in 1795. It was part of the prowincja of Lesser Poland.

Lublin Voivodeship was one of the voivodeships of Congress Poland. It was formed in 1816 from Lublin Department, and in 1837 was transformed into Lublin Governorate.

Lublin Voivodeship (województwo lubelskie) was an administrative region of Poland between 1945 and 1975. In 1975 it was transformed into Chełm, Zamość, Biała Podlaska, Tarnobrzeg and Siedlce Voivodeships and a smaller Lublin Voivodeship. 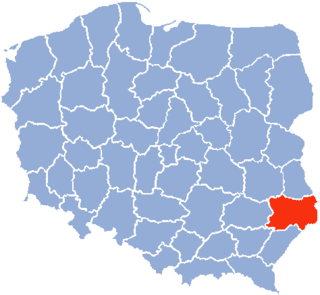 Zamość Voivodeship was a unit of administrative division and local government in Poland in years 1975–1998, superseded by Lublin Voivodeship. 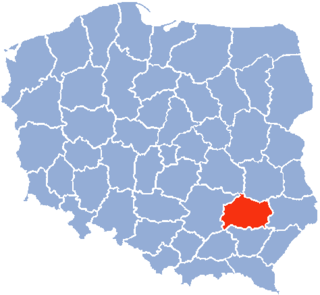 The Tarnobrzeg Voivodeship was a unit of administrative division and local government in Poland in years 1975-1998, superseded in parts by Subcarpathian Voivodeship, Świętokrzyskie Voivodeship and Lublin Voivodeship. Its capital city was Tarnobrzeg, albeit the major city in the region was Stalowa Wola.

Łęczna is a town in eastern Poland with 19,780 inhabitants (2014), situated in Lublin Voivodeship. It is the seat of Łęczna County and the smaller administrative district of Gmina Łęczna. The town is located in northeastern corner of historic province of Lesser Poland. Łęczna tops among the hills of the Lublin Upland, at the confluence of two rivers—the Wieprz, and the Świnka. On December 31, 2010, the population of the town was 20,706. Łęczna does not have a rail station, the town has been placed on a national Route 82 from Lublin to Włodawa. And shall be considered as a start point to Kameralne Pojezierze, as the town has decided to rebrand the lakeland district, from Pojezierze Łęczyńsko-Włodawskie, or Pojezierze Łęczyńskie, to Kameralne Pojezierze. 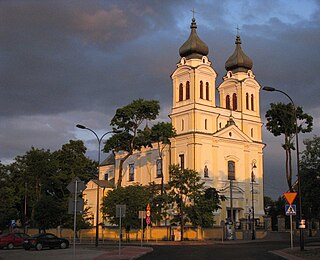 Biłgoraj(listen) is a town in south-eastern Poland with about 27,100 inhabitants (2014). Since 1999 it has been situated in Lublin Voivodeship; it was previously in Zamość Voivodeship (1975–1998). It is located south of Lublin and it is also the capital of Biłgoraj County. Historically, the town belongs to Lesser Poland, and is located in southeastern corner of the province, near the border with another historic land, Red Ruthenia. Biłgoraj is surrounded by forest, with three rivers flowing through it. 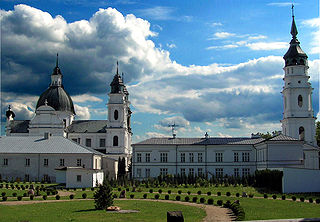 Chełm is a city in eastern Poland with 63,949 inhabitants (2015). It is located to the south-east of Lublin, north of Zamość and south of Biała Podlaska, some 25 kilometres from the border with Ukraine. Chełm used to be the capital of the Chełm Voivodeship until it became part of the Lublin Voivodeship in 1999.

Zamość County is a unit of territorial administration and local government (powiat) in Lublin Voivodeship, eastern Poland. It was established on January 1, 1999, as a result of the Polish local government reforms passed in 1998. Its administrative seat is the city of Zamość, although the city is not part of the county. The county contains three towns: Szczebrzeszyn, which lies 21 km (13 mi) west of Zamość, Zwierzyniec, which lies 24 km (15 mi) south-west of Zamość, and Krasnobród, 22 km (14 mi) south of Zamość. 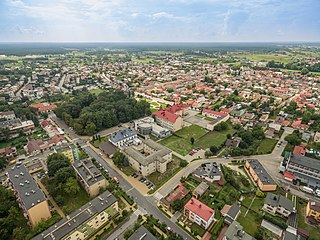 Janów Lubelski is a town in southeastern Poland. It has 11,938 inhabitants (2006). Situated in the Lublin Voivodship, Janów Lubelski belongs to Lesser Poland, and is located in southeastern corner of this historic Polish province. It is the capital of Janów Lubelski County. Previously (1975–1998), Janów belonged to Tarnobrzeg Voivodeship. It has a large hospital. It also has several tourist attractions, including buildings and churches from the 17th and 18th centuries. Janów Lubelski is home to the Open-air museum of the Forest Railway in Janów Lubelski

Zaklikówpronounced [zaˈklikuf] is a town in Poland, located in the Subcarpathian Voivodeship, in Stalowa Wola County. It is located 113.1 miles (182 km) SSE of Warsaw and 50 miles (80 km) from Lublin. For about 300 years of its early history Zaklików was incorporated as a city, but it lost its city charter in punishment for the January Uprising against the imperial rule. It was reinstated as a city on 1 January 2014. Zaklików lies approximately 21 kilometres (13 mi) north of Stalowa Wola and 82 km (51 mi) north of the regional capital Rzeszów. 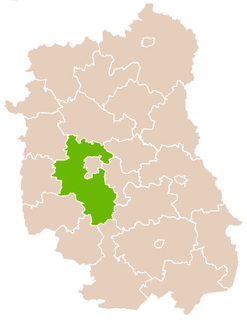 Lublin County is a unit of territorial administration and local government (powiat) in Lublin Voivodeship, eastern Poland. It was established on January 1, 1999, as a result of the Polish local government reforms passed in 1998. Its administrative seat is the city of Lublin, although the city is not part of the county. The only towns in Lublin County are Bełżyce, which lies 23 km (14 mi) west of Lublin, and Bychawa, 26 km (16 mi) south of Lublin.

Włodawa County is a unit of territorial administration and local government (powiat) in Lublin Voivodeship, eastern Poland, on the border with Ukraine and Belarus. It was established on January 1, 1999, as a result of the Polish local government reforms passed in 1998. Its administrative seat and only town is Włodawa, which lies 76 kilometres (47 mi) north-east of the regional capital Lublin.

Lublin Voivodeship was a unit of administrative division of the Second Polish Republic between the two world wars, in the years 1919–1939. The province's capital and biggest city was Lublin.

Michałówka may refer to the following villages in Poland: 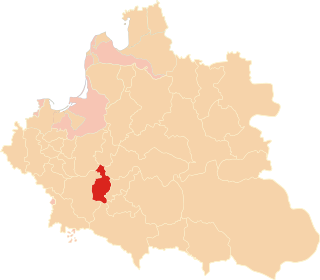 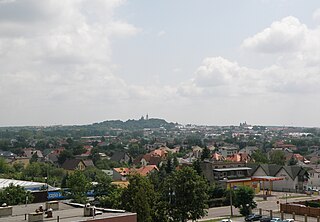 Euroregion Bug is a Euroregion that encompasses cross-border areas of Belarus, Poland and Ukraine. The main aim of the agreement is to develop co-operation in the fields of: regional development, transport, communication, delivery of energy and water, nature protection, industry, trade, agriculture, education, science research, healthcare, culture, art, tourism, recreation and crime and public menace prevention.

Lublin is a Polish parliamentary constituency in the Lublin Voivodeship. It elects fifteen members of the Sejm.

Chełm is a Polish parliamentary constituency in the Lublin Voivodeship. It elects twelve members of the Sejm.