Lucas Sullivant was of Irish descent; [2] the original family name was of the ancient surname Ó Súilleabháin [3] [ circular reference ] of southwestern Ireland.

In 1795 Lucas Sullivant was employed by the Commonwealth of Virginia to survey the Central Ohio portion of the Virginia Military District. Sullivant, along with approximately 20 men surveyed the western side of the Scioto River at the confluence of the Olentangy and Scioto Rivers. As payment for his work, Sullivant was given 6000 acres. [4] Sullivant, after surveying the land, returned to Kentucky where he courted Sarah Starling, the daughter of his mentor Colonel William Starling. In 1797, Sullivant returned to the Ohio and laid out a village of 220 lots in Franklin County, which he named Franklinton in honor of the recently deceased Benjamin Franklin. This original settlement was abandoned a year later in 1798 when a flood submerged most of the town. Sullivant relocated the town less than a mile away, off of the banks of the Scioto River. He also served as the first Recorder of Franklin County, Ohio from 1804 to 1807.

The replatted town was laid out in blocks that contained four lots in a square, with each lot measuring 99’ wide by 115’ deep. To encourage people to move to the new settlement, Sullivant offered free land for anyone willing to build a house along Gift Street, near the eastern edge of his plat. Along with platting and settling the town, Sullivant also built several structures out of brick and glass from Philadelphia. These buildings included a courthouse, a brick home to impress Starling (who was wed to Sullivant in 1801), a brick church and the first bridge across the Scioto River.

Lucas Sullivant married Sarah Starling, the daughter of Sullivant's mentor. They had four children, William Starling, Michael, Joseph, and Sarah Ann. [5] Lucas died on August 28, 1823 and was buried at the Old Franklinton Cemetery. He was later reburied at Green Lawn Cemetery in Columbus, Ohio. [6] 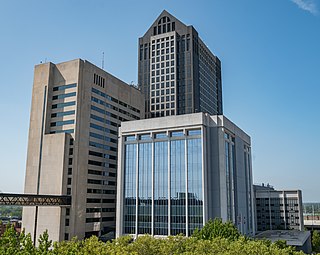 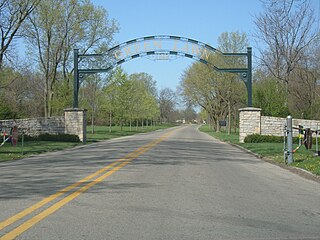 Green Lawn Cemetery is a historic private rural cemetery located in Columbus, Ohio in the United States. Organized in 1848 and opened in 1849, the cemetery was the city's premier burying ground in the 1800s. An American Civil War memorial was erected there in 1891, and chapel constructed in 1902 and expanded in 1963. With 360 acres (150 ha), it is Ohio's second-largest cemetery. 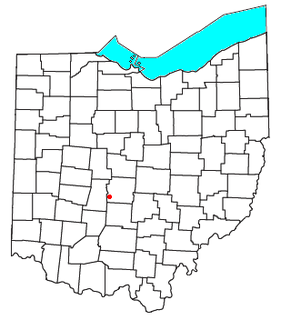 Celebration of Life, also known as the Arthur Boke/Sarah Sullivan statue, is a 2004 bronze sculpture by Alfred Tibor, installed near Franklinton's Genoa Park, in Columbus, Ohio, United States. The artwork depicts a woman holding a baby above her head, and commemorates Arthur Boke, the first known black child born in Franklinton, and Sarah Sullivant, the wife of Lucas Sullivant. The Sullivants, a white couple, raised Boke as their own child.

The Sullivant Land Office is a historic building in the East Franklinton neighborhood of Columbus, Ohio. It was listed on the National Register of Historic Places in 1973 and the Columbus Register of Historic Properties, along with the Gen. William Henry Harrison Headquarters, in 1985. The small brick building was built c. 1822. Its original use was as a single-room real estate office, although it was later expanded. At the time of construction, Lucas Sullivant was selling and giving away pieces of land, and Franklinton became the county seat of Franklin County. The building is the only remaining structure associated with Lucas Sullivant in the Franklinton area. In the early 1980s, the Columbus Recreation and Parks Department moved the building from its original location at 714 W. Gay St. to 13 N Gift St., behind the William Henry Harrison house. The move was prompted because the building was endangered in its original location, with vandalism, deterioration, and plans to create a parking lot for a car dealership on the site.

The Dr. Samuel Mitchel Smith and Sons Memorial Fountain is an 1880 sculpture and memorial by William Walcutt, installed at the Ohio State University Wexner Medical Center in Columbus, Ohio. The bronze and granite memorial is dedicated to Samuel Mitchel Smith, Surgeon General of Ohio during the American Civil War, and the first academic professor for the treatment of the mentally ill in the United States. 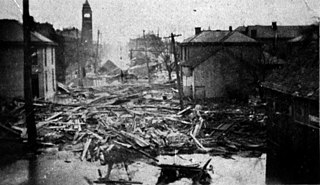 The Lucas Sullivant House was the house of Lucas Sullivant, founder of Franklinton, Ohio. Franklinton was Central Ohio's first white settlement, and a predecessor to and current neighborhood of the city of Columbus.