Lucille Eichengreen (néeCecilie Landau; February 1, 1925 – February 7, 2020) [1] was a survivor of the Łódź (Litzmannstadt) Ghetto and the Nazi German concentration camps of Auschwitz, Neuengamme and Bergen-Belsen. She moved to the United States in 1946, married, had two sons and worked as an insurance agent. In 1994, she published From Ashes to Life: My Memories of the Holocaust. She frequently lectured on the Holocaust at libraries, schools and universities in the U.S. and Germany. She took part in a documentary from the University of Giessen on life in the Ghetto, for which she was awarded an honorary doctorate.

Born Cecilie Landau in Hamburg, Germany, on February 1, 1925, [1] she was the older of two daughters of the Polish-born wine merchant Benjamin Landau and his wife Sala (Sara), née Baumwollspinner. She described her childhood as "very nice, very comfortable" before Hitler came to power in 1933. After that, the Jews became exposed to growing repressive measures by the Nazis as well as insults and assaults by the local population. [2] After returning to Hamburg in the spring of 1939, Benjamin Landau was arrested by the Gestapo on September 1 of that year during the attack on Poland, as a "foreign enemy". He was first brought to a police jail in Fuhlsbüttel, then to Oranienburg concentration camp, and finally to Dachau concentration camp, where he was murdered on December 31, 1940. The family learned of his death only in February 1941, [1] when the Gestapo brought his ashes, "in a cigar box with a rubber band", [2] to their apartment, as Eichengreen recalls:

Two Gestapo came to the house and threw them on the kitchen table. ... They only said 'Ashes, Benjamin Landau!' And walked out. They didn't talk. [2]

On October 25, 1941, she was deported, at age 16, to the Łódź (Litzmannstadt) Ghetto with her mother and her younger sister Karin. In the ghetto, her mother starved to death, dying on July 13, 1942. [3] Lucille found work and survived, living under inhumane conditions. Karin, whom she took care of, was separated from her at age eleven in September 1942, deported to Chełmno extermination camp and murdered. [3]

Lucille worked as a secretary for the journalist and writer Oskar Singer. [4] In 1943, she was hit on the left ear during an interrogation by the Nazi police after a denunciation, resulting in permanent deafness in that ear. In August 1943, she was deported to Auschwitz concentration camp, where she was deemed fit to work during the selection process. A few weeks later, when she went through another selection process, concentration camp doctor Josef Mengele sent her to the satellite camp Dessauer Ufer of KZ Neuengamme, where she was forced to perform heavy labour, working in construction and removing detritus from bomb damage. Later, she was assigned to office work, although she was still exposed to mistreatment from supervisors. In March 1945, she was deported to Bergen-Belsen concentration camp. [3]

After liberation of the concentration camps

Landau was the only member of her immediate family to survive the Holocaust, although it was not until 1947 that she was certain that her sister had died. After the liberation of the Bergen-Belsen camp by the British army, she spent a few months in the camp for displaced persons in Bergen-Belsen, working as a translator for the British. In cooperation with the British forces, she identified 40 members of the SS as having worked in the Neuengamme concentration camp, leading to their arrest and trial before a court. After receiving death threats, she moved to the United States, where she married another Jewish emigrant from Hamburg, Dan Eichengreen. [3] According to her own account, she struggled to overcome the effects of the traumatic events of her youth and suffered from recurring nightmares. In 1995, she returned to Poland and Germany for the first time since 1945, including a visit to Hamburg after accepting an invitation by the Hamburg senate. She also returned to Auschwitz and the former Łódź ghetto. [1]

Eichengreen last lived in Oakland, California. One of her two sons is the American economist Barry Eichengreen. [3] She died on February 7, 2020, shortly after her 95th birthday. [1] [5]

In the 1990s, Eichengreen began to write her memoirs for publication. Her book From Ashes to Life. My Memories of the Holocaust. was published in the United States in 1994. After first visiting Germany, she lectured in schools, universities and at commemorative events. She worked with the research unit for Holocaust literature at the University of Giessen on the chronicles of the Łódź ghetto, a text which gives an account of life in the ghetto. For her involvement, she was awarded an honorary doctorate in the field of language, culture and literature from the university in May 2007. [6]

During a 2009 exhibition in Hamburg with the title In den Tod geschickt. Die Deportation von Juden, Roma und Sinti aus Hamburg 1940 bis 1945 (Sent to Death: The Deportation of Jews, Roma and Sinti from Hamburg, 1940 to 1945), she was awarded the Hamburger Ehrendenkmünze in Gold (Hamburg gold medal of honour) by mayor Ole von Beust. In 2015, a commemorative volume (Festschrift) honoring her work was published. [7] [8] 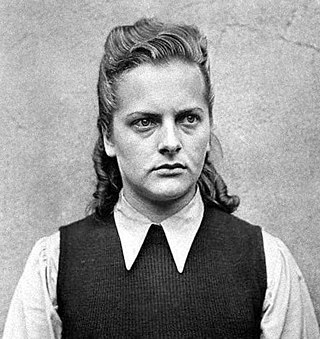 Irma Ida Ilse Grese was an SS guard at the Nazi concentration camps of Ravensbrück and Auschwitz, and served as warden of the women's section of Bergen-Belsen.

The Neuengamme concentration camp was a network of Nazi German concentration camps in Northern Germany that consisted of the main camp, Neuengamme, and its over 85 satellite camps. Established in 1938 near the village of Neuengamme in the Bergedorf district of Hamburg, the Neuengamme camp became the largest concentration camp in Northwest Germany. Over 100,000 prisoners came through Neuengamme and its subcamps, 24 of which were for women. The verified death toll is 42,900: 14,000 in the main camp, 12,800 in the subcamps, and 16,100 in the death marches and bombings during the final weeks of World War II. Following Germany's defeat in 1945, the British Army used the site as an internment camp for SS and other Nazi officials. In 1948, the British transferred the land to the Free Hanseatic City of Hamburg, which summarily demolished the camp's wooden barracks and built in its stead a prison cell block, converting the former concentration camp site into two state prisons operated by the Hamburg authorities from 1950 to 2004. Following protests by various groups of survivors and allies, the site now serves as a memorial. It is situated 15 km southeast of the centre of Hamburg. 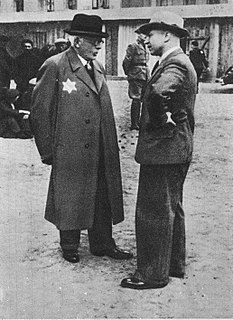 Chaim Mordechaj Rumkowski was the head of the Jewish Council of Elders in the Łódź Ghetto appointed by Nazi Germany during the German occupation of Poland. 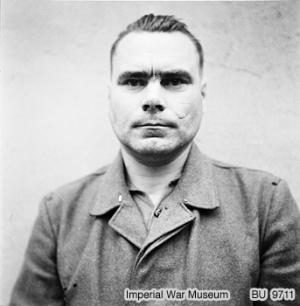 Josef Kramer was the Commandant of Auschwitz-Birkenau and of the Bergen-Belsen concentration camp. Dubbed The Beast of Belsen by camp inmates, he was a notorious German Nazi war criminal, directly responsible for the deaths of thousands of people. He was detained by the British Army after the Second World War, convicted of war crimes and hanged on the gallows in Hamelin prison by British executioner Albert Pierrepoint. 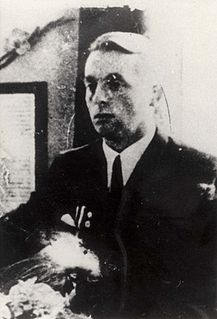 Hans Biebow was the chief of German Nazi administration of the Litzmannstadt Ghetto in occupied Poland. 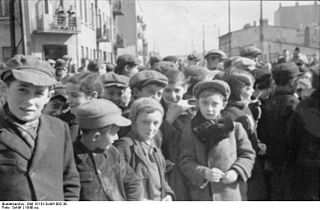 The Łódź Ghetto or Litzmannstadt Ghetto was a Nazi ghetto established by the German authorities for Polish Jews and Roma following the Invasion of Poland. It was the second-largest ghetto in all of German-occupied Europe after the Warsaw Ghetto. Situated in the city of Łódź, and originally intended as a preliminary step upon a more extensive plan of creating the Judenfrei province of Warthegau, the ghetto was transformed into a major industrial centre, manufacturing war supplies for Nazi Germany and especially for the Wehrmacht. The number of people incarcerated in it was increased further by the Jews deported from the Third Reich territories.

Horneburg is a municipality southwest of Hamburg (Germany) in the district of Stade in Lower Saxony.

Siegfried Seidl was an Austrian career officer and World War II Commandant of the Theresienstadt concentration camp located in the present-day Czech Republic. He also was commandant of the Bergen-Belsen, and later served as staff officer to Adolf Eichmann. After the war, in 1947, he was tried in Austria and convicted as a war criminal; sentenced to death, he was executed by hanging. 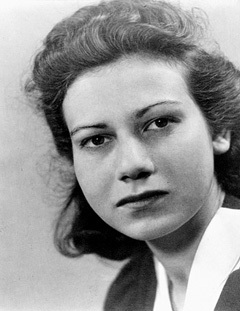 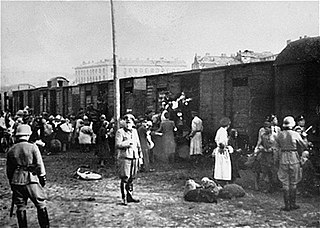 Holocaust trains were railway transports run by the Deutsche Reichsbahn national railway system under the strict supervision of the German Nazis and their allies, for the purpose of forcible deportation of the Jews, as well as other victims of the Holocaust, to the German Nazi concentration, forced labour, and extermination camps. 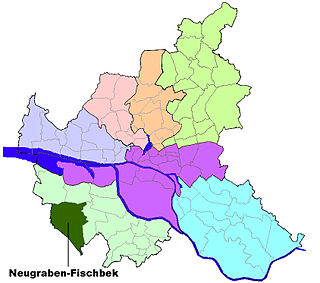 Neugraben-Fischbek (help·info) is a quarter of Hamburg, Germany belongs to the borough Harburg. The quarter consists of the old settlements Neugraben and Fischbek, and the more recently constructed area Neuwiedenthal. 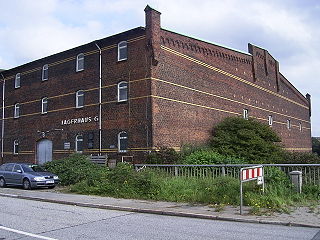 Dessauer Ufer was a subcamp of the Neuengamme concentration camp in Nazi Germany, located inside the Port of Hamburg on the Kleiner Grasbrook in Veddel. It was in operation from July 1944 to April 1945. Inmates were mostly used for forced labour at rubble clearing and building in the Hamburg port area.

This is a timeline of deportations of French Jews to Nazi extermination camps in German-occupied Europe during World War II. The overall total of Jews deported from France is a minimum of 75,721.

Gertrud Heise was a female guard and later, SS overseer at several concentration camps during the Second World War. Heise was born in Berlin, Germany. She was tried for war crimes in 1946.

Anneliese Kohlmann was a German SS camp guard within the Nazi concentration camp system during World War II, notably, at the Neuengamme concentration camp established by the SS in Hamburg, Germany; and at Bergen-Belsen. She was tried for war crimes at the Belsen Trial in Lüneburg in 1945.

Rywka Bajla Lipszyc was a Polish-Jewish teenage girl who wrote a personal diary while in the Łódź Ghetto during the Holocaust in Poland. She survived deportation to Auschwitz-Birkenau concentration camp followed by a transfer to Gross-Rosen and forced labor at its subcamp in Christianstadt. She also survived a death march to Bergen-Belsen, and lived to see her liberation there in April 1945. Too ill to be evacuated, she was transferred to a hospital at Niendorf, where the record of her life ended.