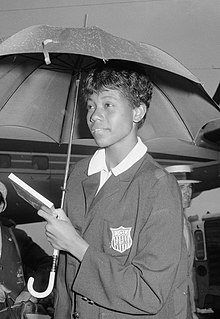 Wilma Glodean Rudolph was an American sprinter, who became a world-record-holding Olympic champion and international sports icon in track and field following her successes in the 1956 and 1960 Olympic Games. Rudolph competed in the 200-meter dash and won a bronze medal in the 4 × 100-meter relay at the 1956 Summer Olympics at Melbourne, Australia. She also won three gold medals, in the 100- and 200-meter individual events and the 4 x 100-meter relay at the 1960 Summer Olympics in Rome, Italy. Rudolph was acclaimed the fastest woman in the world in the 1960s and became the first American woman to win three gold medals in a single Olympic Games. 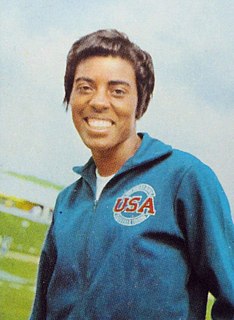 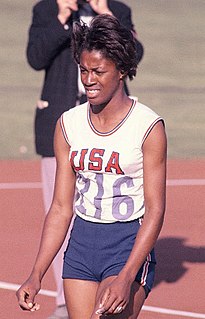 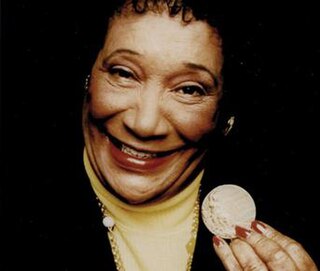 Alice Coachman Davis was an American athlete. She specialized in high jump and was the first black woman to win an Olympic gold medal.

Mildred "Millie" McDaniel-Singleton was an American athlete, who competed mainly in the women's high jump event during her career.

Catherine Hardy Lavender was an American athlete who competed mainly in the 100-meter dash. She won an Olympic gold medal in the 4 × 100 metres relay at the 1952 Olympic Summer Games in Helsinki, Finland. Later Hardy married, had children, and a 30-year teaching career in Atlanta schools.

Margaret Rejean Matthews is an American track and field athlete who mainly competed in the 100 meters and long jump events.

Whitney Lynn Hedgepeth is an American former competition swimmer who won a gold and two silver medals at the 1996 Summer Olympics.

Beth Anne Botsford is an American former competition swimmer and backstroke specialist who won two gold medals as a fifteen-year-old at the 1996 Summer Olympics in Atlanta, Georgia. She did so in the individual 100-meter backstroke, and as a member of the women's relay team in 4×100-meter medley.

Kathleen Elizabeth Hersey is an American competition swimmer who represented the United States at the 2008 and 2012 Summer Olympics and finished fourth in the 200-meter butterfly in 2012.

Allison Rodgers Schmitt is an American competition swimmer who specializes in freestyle events, and is an eight-time Olympic medalist.

Billie Patricia "Pat" Daniels is a retired female pentathlete and track and field coach from the United States, who was the U.S. track and field national champion in the 800 m in 1960 and 1961 and in the pentathlon from 1961 to 1967 and in 1970. She was national long jump champion in 1967. She won the gold medal in the pentathlon at the 1967 Pan American Games in Winnipeg, Canada. A three-time Olympian, she placed seventh in 1964 and sixth in 1968. She first represented the US in 1960, running just five days after her 17th birthday, days before beginning her senior year at Capuchino High School in San Bruno, California.

The 1996 Summer Paralympics were held in the United States city of Atlanta. Australia competed in 13 of the 17 sports, winning medals in 10 of those sports. At the 1996 Summer Paralympics, Australia had the second highest medal tally of any country competing. It won 42 gold, 37 silver and 27 bronze medals. It surpassed the 24 gold medals that Australia won at the 1992 Paralympics. The sports of athletics, swimming and cycling provided Australia with the majority of its medals.