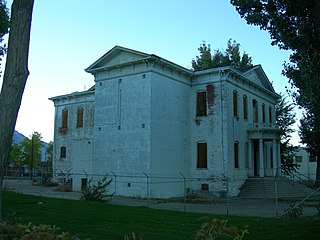 Mineral County is a county located in the U.S. state of Nevada. As of the 2010 census, the population was 4,772, making it the fourth-least populous county in Nevada. Its county seat is Hawthorne.

Hawthorne is a census-designated place (CDP) in Mineral County, Nevada, United States. At the 2010 census, the population was 3,269, a decrease since the 2000 census, when it was 3,311. It is the county seat of Mineral County. The nearby Hawthorne Army Depot is the primary economic base of the town.

The Lucky Boy Mine was located east of the town [2] on the east slope of the Wassuk Range, discovered by men repairing a stage road over a pass. A post office was established March 19, 1909 and discontinued October 31, 1913. [3]

A serious stage coach accident occurred near Lucky Boy in 1909, when "six spirited horses took fright" and then "dragged the passengers down a steep grade at lightning speed". [4] 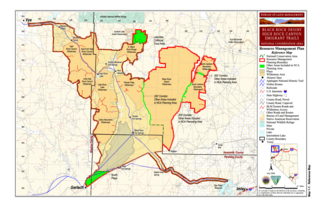 Vya, Nevada is a small ghost town located in Washoe County, in northwestern Nevada, United States. It is about 10 miles (16 km) to the east of the California state line, north of Forty Nine Canyon. Not much remains of the small town, which essentially died in the 1920s. Just two wooden buildings can still be seen—the Vya Post Office and Library. The Vya Post Office was still listed as active, and had a postmaster, until 1941. The settlement was named for Vya Wimer, the first European heritage baby born in the valley. 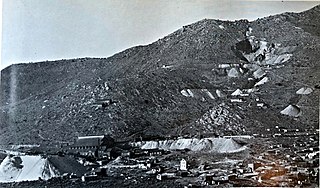 Delamar, Nevada, nicknamed The Widowmaker, is a ghost town in central eastern Nevada, USA along the east side of the Delamar Valley. During its heyday, primarily between 1895 and 1900, it produced $13.5 million in gold. 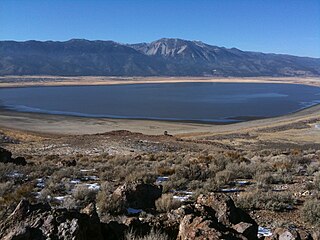 Washoe Lake is a lake located near Carson City in the Washoe Valley of Washoe County, Nevada. It is a very shallow lake with a surface area that can vary greatly from year to year. Washoe Lake State Park sits on the lake's southeastern shore.

Dixie Valley, Nevada, was a small ranching town in Churchill County, Nevada until the area was acquired in 1995 by the US Navy for the Fallon Range Training Complex (FRTC). The town had no retail businesses, most residents were more than a mile from their nearest neighbor, and a 1-room school was the teacher's residence and served as a meeting, dance, & election hall. The abandoned town of Dixie was established at the head of Dixie Valley in 1861 and named by Southern sympathizers. The medium-sized Dixie Valley geothermal power plant employs ~30 people and has 12 production steam wells and ~24 injection wells.

The Kamma Mountains are a mountain range in Pershing County and Humboldt County, Nevada. The ghost town and railroad siding at Sulphur, Nevada is on the west side of the Kamma Mountains at the eastern edge of the Black Rock Desert playa. 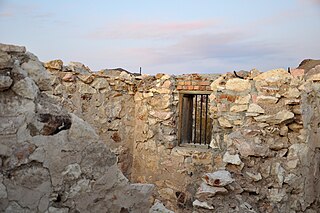 Bullfrog is a ghost town in Nye County, in the U.S. state of Nevada. It is located at the north end of the Amargosa Desert about 4 miles (6.4 km) west of Beatty. Less than 1 mile (1.6 km) north of Bullfrog are the Bullfrog Hills and the ghost town of Rhyolite. The two ghost towns are about 120 miles (190 km) northwest of Las Vegas, 60 miles (97 km) south of Goldfield, and 90 miles (140 km) south of Tonopah.

El Dorado Canyon is a canyon in southern Clark County, Nevada famed for its rich silver and gold mines. The canyon was named in 1857 by steamboat entrepreneur Captain George Alonzo Johnson when gold and silver was discovered here. It drains into the Colorado River at the former site of Nelson's Landing.

Fairview is a ghost town in Churchill County, Nevada, in the United States of America. 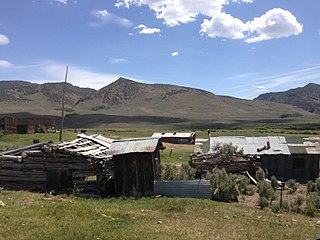 Charleston is a ghost town in Elko County, Nevada, United States. It lies along the Bruneau River just south of the Mountain City and Jarbidge Ranger Districts of the Humboldt-Toiyabe National Forest and is near the southwest edge of the Jarbidge Wilderness.

Pyramid is an unincorporated community in Washoe County, Nevada, United States. At one time, it was a station on the Fernley and Lassen Railway located between Bristol and Big Canyon. At one time there was a post office at this location.

Lucky Jim Camp sometimes called Lucky Camp is a ghost town site in Clark County, Nevada. It was within New Mexico Territory when founded in 1862.

Buster Falls, now a ghost town, was a mining camp in El Dorado Canyon above Huse Spring and the Techatticup Mine in the Colorado Mining District during the time of the American Civil War. The source of the name of the camp is unknown. Its site lay along the canyon a mile above the site of Lucky Jim Camp. The site would be just above the El Dorado Canyon's confluence with Copper Canyon.

Jungo is a ghost town located on Humboldt County Route 55, between Winnemucca, Nevada and Sulphur, Nevada. At one time, Jungo boasted a hotel, store, filling station and blacksmith's shop, though no buildings remain. 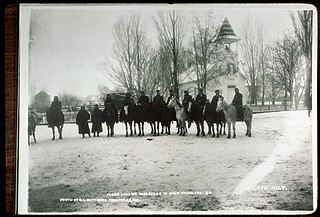 Eagleville is a former populated place in Mineral County, Nevada that is now a ghost town.

Alkali is a ghost town located in Esmeralda County, Nevada. Alkali is the site of Alkali Hot Spring, which was operated as a spa by Geni and Joe Guisti in the 1930s. During Goldfield's peak, the site included an indoor wooden swimming pool with a separate area for children and a large building containing a dining room, kitchen, dance hall and bar. In front of the dining room were tall tamarisk trees and a large picnic table where visitors could either order from the dining room or bring their own lunches. The Guisti residence was at the rear of the dining room. Geni Guisti served young folks grape juice over ice at the bar, which was considered a real treat. Friday and Saturday night dances were attended by Tonopah residents.