Lucy May Cranwell FRSNZ (7 August 1907 – 8 June 2000) was a New Zealand botanist responsible for groundbreaking work in palynology. Cranwell was appointed curator of botany at Auckland Museum in 1929, when she was 21 years old. As well as her work on ancient pollen samples she was responsible for encouraging a love of botany in a generation of Auckland children.

Cranwell was born in Auckland, New Zealand in 1907. She grew up in Henderson under the strong influence of her conservation-minded and artistic mother. It has been suggested that Cranwell inherited the unpredictable aspects of her fearless and adventuresome spirit from her mother's Cornish roots. [1] Her father was a trained nurseryman who had planted an extensive orchard in the family property. She attended Henderson public school and then Epsom Girls Grammar School. She entered the University of Auckland in 1925 where she undertook an initial BA degree that was a mixture of English and Botany, followed by a masters in Botany with a thesis on the epiphytes of the Waitakere Ranges. She graduated in 1929.

During her university studies she developed a love of tramping and gained a reputation as the strongest, fastest walker in the University Field Club. [1] Her love of the New Zealand wilderness stood her in good stead for the many botany field trips she began to embark on, most often with fellow botany student and friend Lucy Moore, to various remote and inaccessible parts of the country.

In April 1929, a few weeks after graduating, the director of the Auckland Museum, Dr Gilbert Edward Archey, offered Cranwell the inaugural Botany Curator position. The museum was due to open in its new, much larger, war memorial building in November of that year and its halls were in need of filling with displays.

"Everything had to be done on a shoestring, alas, and there was no artist to help make the cases look seductive for man, woman, or child. People did not seem to take notice, however. Dr Archey had stressed that we were to consider ourselves the servants of the public; we were to welcome enquiries of all kinds," wrote Cranwell of those first few months in the job. [1]

As well as finding botanical specimens for display she also set about organising the Cheeseman herbarium of about 10,000 specimens. During her 14 years as botany curator she introduced "botany trots" for children to places like Rangitoto Island in the Hauraki Gulf, wrote weekly short articles for children about plants for the Auckland Star newspaper, and collected over 4000 plants for the herbarium during her 14 years as the botanist.

Cranwell's field work was among the first and certainly the most extensive undertaken by a woman scientist in New Zealand. These included trips into the pristine, ancient podocarp forests of the King Country looking for root parasites, various trips to Te Moehau peak on the tip of the Coromandel peninsula where she documented the unique alpine flora found there, and several visits to Maungapohatu in Te Urewera. She also undertook a study of marine algae of New Zealand's northern islands (a green and a red algae are named after her), surveys of Auckland Harbour and its west coast between Muriwai and Piha, as well as several trips to take fossil pollen samples from South Island bogs. [2]

Field trips in the 1920s and 1930s were tough assignments. Cranwell and her botanical companion Lucy Moore often slept out in the open in canvas sleeping bags, occasionally waking up covered in frost. Her field experience led her to be a conservationist recognising early that possums and wallabies represented a serious threat to the biodiversity of New Zealand forests.

The New Zealand native grass species Festuca luciarum is named after both her and Lucy Moore.

During a trip to Europe, which included attending the International Botanical Congress in Amsterdam in 1935, she was invited by Professor Lennart von Post of Stockholm to learn his method of fossil pollen analysis . With knowledge of this new field study, palynology, Cranwell opened up a whole new field of botany in New Zealand. [2] Her work analysing pollen taken from the sediment in bogs revealed the past botanical assemblages in New Zealand and aided an understanding of New Zealand's past as part of the supercontinent of Gondawana.

She was made a Fellow of the Linnaean Society (London) in November 1937, "in recognition of botanical research work done both in New Zealand and Sweden and because of efforts she has made to stimulate interest in botany through her position at the Auckland Museum." In the same year she won New Zealand's premier conservation award, the Loder Cup. She was awarded the Hector Medal from the Royal Society of New Zealand in 1954, the first woman ever to receive this honour. [3]

Cranwell’s war effort during WWII was to research to and prepare a booklet for downed allied airmen called "Food is Where You Find It: A Guide to Emergency Foods of the Western Pacific". [4] It detailed, with illustrations, what fish and foods the downed pilots with could eat. The booklet proved extremely popular and five facsimile impressions followed the initial print run of 5000 copies.

Cranwell married Captain (later Major) Samuel Watson Smith (1897–1993) of the 13th US Airforce, a lawyer and later eminent researcher in archaeology, in 1943 and moved to the United States in 1944. They had one son, Benjamin Watson Smith. After working at Harvard University Cranwell became a Research Affiliate in palynology at the University of Arizona, Tucson. She earned international recognition for her work in this field, particularly on Gondwanan plant microfossils.

Lucy May Cranwell Smith was elected as a Fellow of the Royal Society of New Zealand in 1944, and was the second woman to receive this award. [5] [6]

The New Zealand Association of Scientists Cranwell Medal is awarded to a practising scientist for excellence in communicating science to the general public in any area of science or technology. In 2017 this medal was renamed from the Science Communicator Medal to honour Cranwell, a remarkable communicator of science – in a time when this was essentially unheard of. The inaugural winner was the physicist Ocean Mercier. 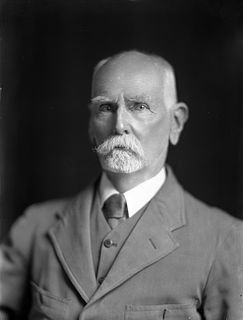 Thomas Frederic Cheeseman was a New Zealand botanist. He was also a naturalist who had wide-ranging interests, such that he even described a few species of sea slugs.

Eric John Godley OBE, FRSNZ, Hon FLS, Hon DSc (Cantuar.), AHRNZIH was a New Zealand botanist and academic biographer. He is best known for his long-running series of in the popular magazine New Zealand Gardener and his "Biographical notes" series that ran in the New Zealand Botanical Society Newsletter and which is the prime resource on the lives of many New Zealand botanists. 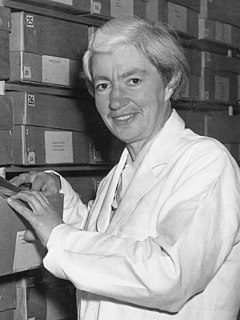 Ruth Mason was a New Zealand botanist specialising in the taxonomy and ecology of freshwater plants.

Kathleen Maisey Curtis, Lady Rigg was a New Zealand mycologist and was a founder of plant pathology in New Zealand.

Dame Ella Orr Campbell was a New Zealand botanist. An expert on bryophytes, she published 130 scientific papers on liverworts, hornworts, orchids, and wetlands. She became the first woman faculty member of the Massey Agricultural College in 1945, and in 2003 the herbarium at Massey was renamed the Dame Ella Campbell Herbarium in her honour. Following her retirement from teaching in 1976, she continued to research and publish for another two decades, finally retiring in 2000 at the age of 90.

Bella Dytes MacIntosh MacCallum was a New Zealand and British botanist and mycologist and was New Zealand's first female doctor of science. 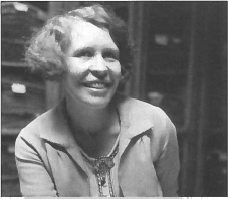 Margery Claire Carlson was an American botanist and a professor at Northwestern University. After earning a Ph.D. in botany and becoming the first full-time female professor at Northwestern, she went on a number of international scientific expeditions to Central America in order to collect plant specimens and find new species. Her relationship as a research assistant at the Field Museum of Natural History meant that a majority of her plant collection was donated to the museum and a special botany collection was created for her there. Carlson had a long history of involvement in the conservation movement and was honored with multiple awards, along with a nature preserve being named after her.

Betty Eleanor Gosset Molesworth Allen was a New Zealand botanist. She researched and published extensively on Southeast Asian ferns, and in her retirement she discovered a fern in southern Spain that had previously been thought to be an exclusively tropical species.

Beryl Brintnall Simpson is a professor emeritus in the Department of Integrative Biology at the University of Texas at Austin. Previously she was an associate curator at the Smithsonian National Museum of Natural History in the Department of Botany. She studies tropical botany, focusing on angiosperms found in the American Southwest, Mexico, and Central and South America. She was awarded the José Cuatrecasas Medal for Excellence in Tropical Botany for her decades of work on the subject.

Grace Marie Taylor was a New Zealand mycologist, botanist and scientific illustrator. She described several new species of fungi and published and illustrated books on New Zealand fungi and plants.

Ellen (Nelly) Maud Cheeseman was a painter and botanist from England who emigrated to New Zealand as a child. Her watercolour paintings of New Zealand birds, animals and landscapes are in the permanent collection of Auckland Museum.

Kate Violet Edgerley was a New Zealand botanist and teacher.

Marguerite Winifred Crookes was a botanist and conservationist from New Zealand and founder of the Auckland Natural History Club. Her best known work is Plant Life in Maoriland: A Botanist’s Note Book.