Lucy Kate Pargeter (born 1 March 1977) is an English actress, known for her roles as Helen Raven in Crossroads (2002–2003) and Chas Dingle in Emmerdale (2002–present). She also finished third in the 13th series of the ITV reality show I'm a Celebrity...Get Me Out of Here! in 2013. For her role in Emmerdale, she won the 2019 British Soap Award for Best Actress.

Pargeter was born in Nottingham. She trained at the Central Junior Television Workshop and New College, Nottingham. She was a member of the band Paperdolls, which toured with Boyzone in the 1990s and took part in Stars in Their Eyes as Emma Bunton.

She has appeared in Soldier Soldier , Dalziel and Pascoe , and played the role of Brenda in the film Anita and Me . However, it is for her roles as Helen Raven in Crossroads (2002–2003) and Chas Dingle, whom she currently plays in the long-running soap Emmerdale (2002–present), that she is best known. In January 2006, she appeared in the reality singing competition Soapstar Superstar and finished in third place. In 2007, the Irish channel TV3 hosted the TV Now magazine awards, in which Pargeter and fellow Emmerdale actor Tom Lister won Best Couple for their portrayal of Chas and Carl. In 2011, she appeared on a celebrity edition of Who Wants to Be a Millionaire? , with her Emmerdale co-star Danny Miller.

In November 2013, Pargeter entered the thirteenth series of I'm a Celebrity...Get Me Out of Here! , where she finished in third place. [1] In December 2018 she appeared in a celebrity edition of The Chase , and won £5,000 for her selected charity, “Safe at Last”.

In June 2019, Pargeter won the Best Actress award at The British Soap Awards; she was also nominated for Best Female Dramatic Performance and Best On-Screen Partnership, alongside Dominic Brunt. [2]

Pargeter has three daughters with her former partner, Rudi Coleano. She took maternity leave from Emmerdale in 2005 to have her first child, and another in 2017 to have twins. [3] Coleano and Pargeter split up in 2019. [4] 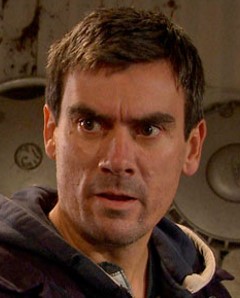 Debbie Dingle is a fictional character from the British ITV soap opera, Emmerdale, played by Charley Webb. Webb has taken maternity leave three times, with the first time being in 2010 before returning in 2011, and the second throughout 2016 with Debbie departing on 1 January 2016. She returned on 24 January 2017 and then went on maternity leave for a third time in 2019 as Debbie left for Scotland on 13 August 2019. She returned on 25 December 2020, and making her final appearance in 11 February 2021. 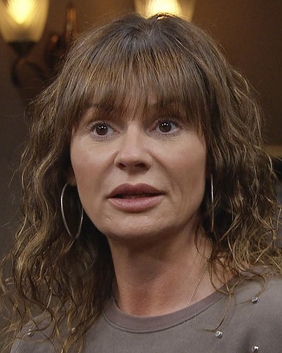 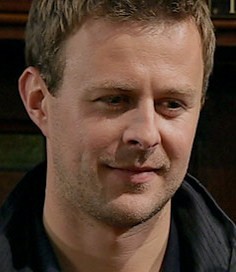 Carl Thomas King is a fictional character from the British ITV soap opera, Emmerdale, played by Tom Lister. The character and casting were announced in January 2004 when it was announced that producers were bringing "four new single 'hunks'" into the show, one of them being Carl. Lister made his first appearance on the show on 6 February 2004. Throughout the course of his story arc, Carl establishes a relationship with Chas Dingle – which contributes to his storylines that include the pair having a ill-fated wedding after Chas exposes Carl's affair with her best friend Eve Jenson. During his time on the show, Carl has accidentally caused the death of local postman Paul Marsden ; killed his own father Tom in the events surrounding the Who Killed Tom King? storyline, which he ultimately confessed to his brothers Jimmy and Matthew on the show's 500th village anniversary episode – after the trio were acquitted for their father's murder; formed a romance with DCI Grace Barraclough, the policewoman investigating his father's murder, that culminated with her being killed in a hit and run – just as she prepared to take Carl into custody after he admitted to killing his father; sparked a business conflict with Matthew that concluded with the latter's death, after Carl ruined Matthew's ill-fated wedding to his business partner Anna De Souza by exposing his involvement behind the death of her father Donald ; developed a feud with Chas' niece Debbie upon clashing with her parents, Cain and Charity, respectively; embarked on a failed marriage with Lexi Nicholls ; and became archenemies with Debbie's ex-boyfriend Cameron Murray after discovering his affair with Chas and subsequently blackmailing the pair in repaying him the £30,000 that Chas previously swindled from his bank account. 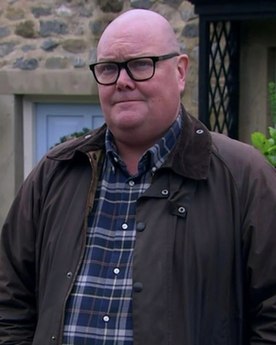 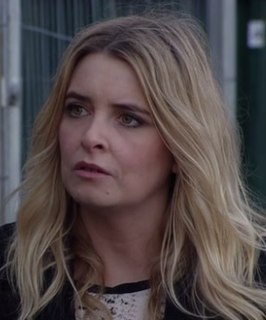 Charlotte Anne Webb is an English actress. Since 2002, she has portrayed the role of Debbie Dingle in the ITV soap opera Emmerdale. In 2014, she was nominated for Best Female Dramatic Performance at The British Soap Awards.

Dominic Adam Brunt is an English actor, director and producer, known for portraying the role of Paddy Kirk in the ITV soap opera Emmerdale. For his role as Paddy, Brunt has been nominated in various categories at the British Soap Awards, Inside Soap Awards and the National Television Awards. As well as acting, Brunt also produces and directs horror films alongside Joanne Mitchell; he also co-hosts an annual zombie film festival with Emmerdale co-star Mark Charnock.

All About Soap was a fortnightly UK magazine founded in October 1999. It was released on Tuesdays. Storylines of the shows it covers are from soap operas shown in the United Kingdom and from Australia, including EastEnders, Coronation Street, Emmerdale, Doctors, Hollyoaks, Neighbours and Home and Away. 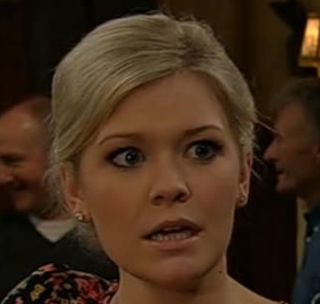 Sadie King is a fictional character from the British television soap opera Emmerdale, played by Patsy Kensit. She made her first appearance during the episode broadcast on 10 May 2004. The character was introduced as the ex-wife of Jimmy King, who arrived with his family in February–March 2004. Kensit left the serial to accept a role on Holby City and Sadie made her final appearance on 21 September 2006. For her portrayal of Sadie, Kensit won the Best Bitch accolade at the 2005 and 2006 Inside Soap Awards.