Last updated January 29, 2020
For the British company, see Ludger Limited. For other people with the name, see Ludger (name).

Saint Ludger (Latin : Ludgerus; also Lüdiger or Liudger) (born at Zuilen near Utrecht c. 742; died 26 March 809 at Billerbeck) was a missionary among the Frisians and Saxons, founder of Werden Abbey and first Bishop of Münster in Westphalia. He has been called the "Apostle of Saxony". [1]

St Ludger's parents, Thiadgrim and Liafburg, were wealthy Christian Frisians of noble descent. In 753 Ludger saw the great Apostle of Germany, Saint Boniface, which, together with the subsequent martyrdom of the saint, made a deep impression on him. At his own request he was sent to the Utrecht Cathedral School (Martinsstift), founded by Saint Gregory of Utrecht in 756 or 757, and made good progress. In 767 Gregory, who did not wish to receive episcopal consecration himself, sent Alubert, who had come from England to assist him in his missionary work, to York to be consecrated bishop. Ludger accompanied him to be ordained into the diaconate (as he duly was, by Ethelbert of York) and to study under Alcuin, but after a year he returned to Utrecht. Some time later he was granted an opportunity to continue his studies at York, when he developed a friendship with Alcuin which lasted throughout life. [2]

In 772 friction arose between the Anglo-Saxons and the Frisians, and Ludger - for the sake of his personal safety - left for home, taking with him a number of valuable books. He remained in the Martinsstift until the death of Gregory in 775, in honour of whose memory he wrote the biography Vita Gregorii. [1] He was then sent to Deventer to restore the chapel destroyed by the pagan Saxons and to find the relics of Saint Lebuinus, who had worked there as missionary, built the chapel, and died there in c. 775. Ludger succeeded, and returned to teach in the Martinsstift, after which he and others were sent north to destroy pagan places of worship west of the Lauwers Zee. [2]

After Ludger had been ordained at Cologne on 7 July 777, the missions of Ostergau (or Ostracha, i.e., East Frisia) were committed to his charge, of which missions Dokkum, the place of the martyrdom of Saint Boniface, was made the centre. Every autumn however he came back to Utrecht to teach at the cathedral school. He worked in this way for about seven years, until Widukind in 784 persuaded the Frisians to drive out the missionaries, burn the churches, and return to the pagan gods. [2]

Ludger escaped with his disciples, and in 785 visited Rome, where he was well received by Pope Adrian I, who gave him much advice and special faculties. From Rome he went to Monte Cassino, where he lived according to the Rule of Saint Benedict, but did not bind himself by vows. [3] The news of Widukind's submission, and the arrival of Charlemagne at Monte Cassino in 787, put an end to St. Ludger's peaceful retirement. He was appointed missionary to five districts east of the river Lauwers, around the estuaries of the Hunze, the Fivel, and the Ems, which were still occupied almost entirely by pagans. He began his work armed with characteristic energy and faith in God, and had a significant advantage in that he knew the language and habits of the people, and put this knowledge to good use in achieving their conversion.

He worked in many places: the island of Bant, long since sunk beneath the sea, is mentioned as the scene of his apostolic work. He visited Heligoland (Fossitesland), where Saint Willibrord had preached, where he destroyed the remains of paganism and built a Christian church. The well, formerly sacred to the pagan gods, he re-dedicated as his baptismal font. On his return he met the blind bard Bernlef, last of the Frisian skalds, cured his blindness, and made him a devout Christian. [3]

In 793 Charlemagne wished to make Ludger Bishop of Trier, but he declined, while declaring himself willing to undertake the evangelization of the Saxons. Charlemagne accepted the offer, and north-western Saxony was thus added to Ludger's missionary field. The monastery of St. Ludger's Abbey at Helmstedt was founded as part of his missionary activity in this part of Germany. To meet necessary expenses the income of the Abbey of Leuze, in the present Belgian province of Hainaut, was given him, and he was told to pick his fellow-workers from the members of that abbey.

As Mimigernaford (also Mimigardeford or Miningarvard) had been designated the centre of the new district, Ludger built a monastery for canons regular there, from which the place took the name of Münster. Here he lived with his monks according to the rule of Saint Chrodegang of Metz, [3] which in 789 had been made obligatory in the Frankish territories. He also built a chapel on the left bank of the Aa in honour of the Blessed Virgin, as well as the churches of Billerbeck, Coesfeld, Hersfeld, Nottuln and others. Near the church of Nottuln he built a home for his sister, Gerburgis, who had consecrated herself to God. Many other women soon joined her, and so originated the first convent in Westphalia (c. 803). Better known among his foundations, however, is the abbey at Werden, [4] founded (after an abortive attempt to establish a religious house at Wichmond on the Erft) in c. 800 and consecrated in 804, on ground which Ludger himself had acquired, in fulfilment of his desire, formed since his stay at Monte Cassino, to found a Benedictine house.

Alcuin recommended him to Charlemagne, who had Hildebold, Archbishop of Cologne, consecrate Ludger as bishop of Munster on 30 March 805. Ludger's principal concern was to have a good and efficient clergy. To a great extent he educated his students personally, and generally took some of them on his missionary tours. He also founded the monastery of Helmstad, afterwards called Ludger-Clooster, or Ludger's Cloister, in the duchy of Brunswick. [5]

It was said of him that his peaceful methods were far more effective in promoting Christianity than the aggressive tactics of Charlemagne. He was criticised during his life for spending money on alms that should have gone towards the ornamentation of his churches. He suffered thereby, but was able to convince Charlemagne that this was no fault. [5]

On Passion Sunday 809, Ludger heard Mass at Coesfeld early in the morning and preached, then went to Billerbeck, where at 9:00 he again preached, and said his last Mass. That evening he died peacefully in the company of his followers, at the age of sixty-six. [1]

A dispute arose between Münster and Werden for the possession of his body. His brother Hildegrim was appealed to, and after consultation with the emperor, decided in favour of Werden, where the relics still remain. Portions have, however, since been brought to Münster and Billerbeck.

The successive Vitae, beginning with the serious contemporary biographical work of Altfrid and passing through the Vita Secunda and Vita Tertia to the Libellus Monasteriensis de miraculis sancti Liudgeri (The Little Book of Münster on the Miracles of Saint Ludger) of c. 1170, demonstrate the growth of the legend. Votive practice in Münster seems to have focused on a very large and elaborate cross containing a number of relics of the saint. The cult seems to have remained mostly local, and largely to have faded in the later Middle Ages. He is the patron saint of Werden, East Frisia, and Deventer. [6]

St. Ludger is represented either as a bishop holding a church and a book [6] or as standing between two geese (occasionally described as swans). His feast day is celebrated on 26 March. 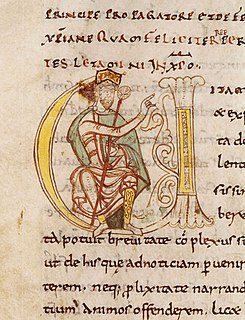 Einhard was a Frankish scholar and courtier. Einhard was a dedicated servant of Charlemagne and his son Louis the Pious; his main work is a biography of Charlemagne, the Vita Karoli Magni, "one of the most precious literary bequests of the early Middle Ages."

Saint Boniface, born Winfrid in the Devon town of Crediton, England, was a leading figure in the Anglo-Saxon mission to the Germanic parts of the Frankish Empire during the 8th century. He organised significant foundations of the Catholic Church in Germany and was made archbishop of Mainz by Pope Gregory III. He was martyred in Frisia in 754, along with 52 others, and his remains were returned to Fulda, where they rest in a sarcophagus which became a site of pilgrimage. Boniface's life and death as well as his work became widely known, there being a wealth of material available—a number of vitae, especially the near-contemporary Vita Bonifatii auctore Willibaldi, legal documents, possibly some sermons, and above all his correspondence. He became the patron saint of Germania, known as the "Apostle of the Germans".

Year 804 (DCCCIV) was a leap year starting on Monday of the Julian calendar.

Widukind, also known as Widuking or Wittekind, was a leader of the Saxons and the chief opponent of the Frankish king Charlemagne during the Saxon Wars from 777 to 785. Charlemagne ultimately prevailed, organized Saxony as a Frankish province, massacred thousands of Saxon nobles, and ordered conversions of the pagan Saxons to Roman Catholicism. In later times, Widukind became a symbol of Saxon independence and a figure of legend.

Hildegard, was a Frankish queen consort who was the second wife of Charlemagne and mother of Louis the Pious. Little is known about her life, because, like all women related to Charlemagne, she became notable only from a political background, recording her parentage, wedding, death, and her role as a mother.

Coesfeld is the capital of the district of Coesfeld in the German state of North Rhine-Westphalia. 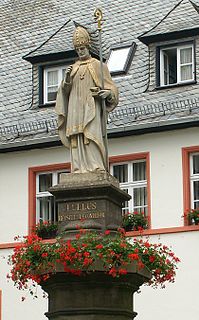 Saint Lullus was the first permanent archbishop of Mainz, succeeding Saint Boniface, and first abbot of the Benedictine Hersfeld Abbey. 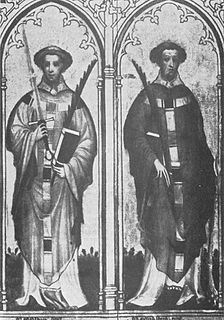 The Two Ewalds were Saint Ewald the Black and Saint Ewald the Fair, martyrs in Old Saxony about 692. Both bore the same name, but were distinguished by the difference in the colour of their hair and complexions. They are now honored as saints in Westphalia.

Billerbeck is a municipality in the district of Coesfeld in North Rhine-Westphalia in Germany.

Hildegrim was Bishop of Châlons from 804 to 810 and second abbot of Werden Abbey, after his elder brother Ludger, from 809 until his death. 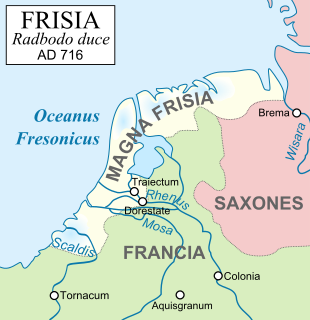 The Frisian Kingdom, also known as Magna Frisia, is a modern name for the Frisian realm in the period when it was at its largest (650-734). This empire was ruled by kings and emerged in the mid-7th century and probably ended with the Battle of the Boarn in 734 when the Frisians were defeated by the Frankish Empire. It lay mainly in what is now the Netherlands and – according to some 19th century authors – extended from the Zwin near Bruges in Belgium to the Weser in Germany. The center of power was the city of Utrecht. In medieval writings, the region is designated by the Latin term Frisia. There is a dispute among historians about the extent of this realm; There is no documentary evidence for the existence of a permanent central authority. Possibly Frisia consisted of multiple petty kingdoms, which transformed in time of war to a unit to resist invading powers, and then headed by an elected leader, the primus inter pares. It is possible that Redbad established an administrative unit. Among the Frisians at that time there was no feudal system.

Eoban was a companion of St. Boniface, and was martyred with him on his final mission. In Germany, he is revered as a bishop and martyr.

Unno was a duke from the medieval Frisian shire of Rüstringen.

In legend and in the early historiography of Switzerland there is an account of a migration of a population of Swedes and Frisians settling in the Swiss Alps, specifically in Schwyz and in Hasli (Schwedensage).

Ludger Stühlmeyer is a German cantor, composer, docent and musicologist. 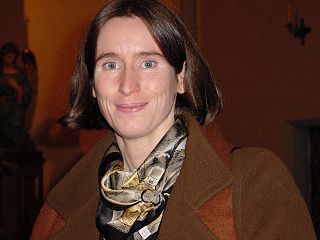 Eugen Eckert is a German social worker, minister, singer-songwriter and academic teacher. He is known for his lyrics for new spiritual songs, and his oratorios and musical plays.

This article includes some information from the German Wikipedia (mostly in German):