Ludwik Fleck (11 July 1896 –5 June 1961) was a Polish Jewish [4] and Israeli physician and biologist who did important work in epidemic typhus in Lwów,Poland,with Rudolf Weigl [5] and in the 1930s developed the concepts of the "Denkstil" ("thought style") and the "Denkkollektiv" ("thought collective").

The concept of the "thought collective" defined by him is important in the philosophy of science and in logology (the "science of science"),helping to explain how scientific ideas change over time,much as in Thomas Kuhn's later notion of the "paradigm shift" and in Michel Foucault's concept of the "episteme".

Fleck was born in Lemberg (Lwów in Polish,now L'viv,Ukraine) and grew up in the cultural autonomy of the Austrian province of Galicia. He graduated from a Polish lyceum (secondary school) in 1914 and enrolled at Lwów's Jan Kazimierz University,where he received his medical degree.

In 1920 he became an assistant to the famous typhus specialist Rudolf Weigl at Jan Kazimierz University. From 1923 to 1935 Fleck worked in the department of internal medicine at Lwów General Hospital,then became director of the bacteriological laboratory at the local social security authority. From 1935 he worked at the private bacteriological laboratory which he had earlier founded.

With Nazi Germany's occupation of L'viv,Fleck was deported with his wife,Ernestina Waldmann,and son Ryszard to the city's Jewish ghetto. He continued his research in the hospital and developed a new procedure in which he procured a vaccine from the urine of typhus patients. Fleck's work was known to the German occupiers and his family were arrested in December 1942 and deported to the Laokoon pharmaceutical factory to produce a typhus serum. He and his family were arrested again and sent to the Auschwitz concentration camp on February 7,1943. His task was to diagnose syphilis,typhus and other illnesses using serological tests. From December 1943 until the liberation of Poland on April 11,1945 Fleck was detained in Buchenwald concentration camp;there,he worked with Marian Ciepielowski to produce a working typhus vaccine for camp inmates,while producing a fake vaccine for the SS.

Between 1945 and 1952,he served as the head of the Institute of Microbiology of the School of Medicine of Maria Sklodowska-Curie University of Lublin. In 1952,he moved to Warsaw to become the Director of the Department of Microbiology and Immunology at the Mother and Child State Institute. In 1954 he was elected a member of the Polish Academy of Sciences. Fleck's research during these years focused on the question of the behavior of leucocytes in infectious and stress situations. Between 1946 and 1957 he published 87 medical and scientific articles in Polish,French,English and Swiss journals. In 1951 Fleck was awarded the National Prize for Scientific Achievements and in 1955 the Officer's Cross of the Order of Polonia Restituta.

In 1956,after a heart attack and the discovery that he was suffering from lymphosarcoma,Fleck emigrated to Israel where a position was created for him at the Israel Institute for Biological Research. He died in 1961 at the age of 64 of a second heart attack.

The Ludwik Fleck Prize is awarded annually for the best book in the area of science and technology studies. It was created by the 4S Council (Society for the Social Studies of Science) in 1992.

Fleck wrote that the development of truth in scientific research was an unattainable ideal as different researchers were locked into thought collectives (or thought-styles). This means "that a pure and direct observation cannot exist: in the act of perceiving objects the observer, i.e. the epistemological subject, is always influenced by the epoch and the environment to which he belongs, that is by what Fleck calls the thought style". [6] A "truth" was a relative value, expressed in the language or symbolism of the thought collective in which it belonged, and subject to the social and temporal structure of this collective. To state therefore that a specific truth is true or false is impossible. It is true in its own collective, but incomprehensible or unverifiable in most others. He felt that the development of scientific insights was not unidirectional and does not consist of just accumulating new pieces of information, but also in overthrowing the old ones. This overthrowing of old insights is difficult because a collective attains over time a specific way of investigating, bringing with it a blindness to alternative ways of observing and conceptualization. Change was especially possible when members of two thought collectives met and cooperated in observing, formulating hypothesis and ideas. He strongly advocated comparative epistemology. This approach anticipated later developments in social constructionism, and especially the development of critical science and technology studies. 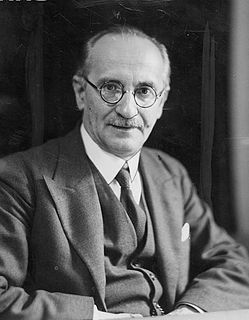 Jan Łukasiewicz was a Polish logician and philosopher who is best known for Polish notation and Łukasiewicz logic. He was born in Lemberg, a city in the Galician Kingdom of Austria-Hungary. His work centred on philosophical logic, mathematical logic and history of logic. He thought innovatively about traditional propositional logic, the principle of non-contradiction and the law of excluded middle, offering one of the earliest systems of many-valued logic. Contemporary research on Aristotelian logic also builds on innovative works by Łukasiewicz, which applied methods from modern logic to the formalization of Aristotle's syllogistic.

Constructivism is a view in the philosophy of science that maintains that scientific knowledge is constructed by the scientific community, which seeks to measure and construct models of the natural world. According to the constructivist, natural science, therefore, consists of mental constructs that aim to explain sensory experience and measurements.

The University of Wrocław is a public research university located in Wrocław, Poland. It is the largest institution of higher learning in the Lower Silesian Voivodeship with over 100,000 graduates since 1945, including some 1,900 researchers among whom many received the highest awards for their contribution to the development of scientific scholarship. Renowned for its relatively high quality of teaching, it was placed 44th on the QS University Rankings: EECA 2016, and is situated in the same campus as the former University of Breslau, which produced 9 Nobel Prize winners.

Wacław Szybalski was a Polish-American professor of oncology at the McArdle Laboratory for Cancer Research, University of Wisconsin–Madison Medical School.

Rudolf Stefan Jan Weigl was a Polish biologist, physician and inventor, known for creating the first effective vaccine against epidemic typhus. He was nominated for the Nobel Prize in Medicine each year between 1930 and 1934, and from 1936 to 1939. 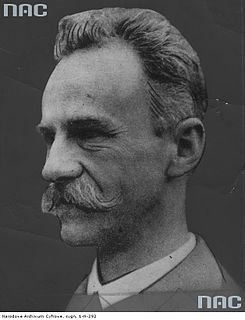 Tadeusz Marian Kotarbiński was a Polish philosopher, logician and ethicist.

Kazimierz Jerzy Skrzypna-Twardowski was a Polish analytic philosopher, logician, and rector of the Lwów University. He was initially affiliated with Alexius Meinong's Graz School of object theory.

The Lwów–Warsaw School was a Polish school of thought founded by Kazimierz Twardowski in 1895 in Lemberg, Austro-Hungary. 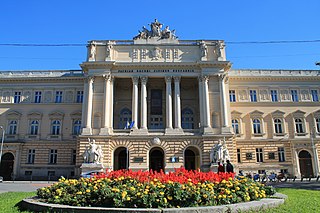 The University of Lviv, presently the Ivan Franko National University of Lviv is the oldest institution of higher learning in present-day Ukraine dating from 1661 when John II Casimir, King of Poland, granted it its first royal charter. Over the centuries, it has undergone various transformations, suspensions, and name changes that have reflected the geo-political complexities of this part of Europe. The present institution can be dated to 1940. It is located in the historic city of Lviv in Lviv Oblast of Western Ukraine.

Danylo Halytsky Lviv National Medical University, — formerly known as the Lviv State Medical Institute, earlier the Faculty of Medicine of the John Casimir University and, before that, Faculty of Medicine of the Francis I University — is one of the oldest and biggest medical universities in Ukraine. LNMU begins from the Medical Faculty of Lviv University, which was opened on November 16, 1784, according to the privilege of the Austrian emperor Josef II. The medical school is named after King Daniel of Galicia, the historical founder of the city in 1256 AD. In 2009 University celebrated its 225 anniversary.

Typhus vaccines are vaccines developed to protect against typhus. As of 2020 they are not commercially available.

Juliusz Kleiner was a Polish historian and literary theorist.

A louse-feeder was a job in interwar and Nazi-occupied Poland, at the Lviv Institute for Study of Typhus and Virology and the associated Institute in Kraków, Poland. Louse-feeders were human sources of blood for lice infected with typhus, which were then used to research possible vaccines against the disease.

The Institute for Typhus and Virus Research was a scientific research centre founded in the city of Lwów, now known as Lviv. Between 1920 and 1939, it was part of Jan Kazimierz University's Biology Department. Research into a typhus vaccine was started in 1920 by parasitologist Rudolf Weigl. Weigl developed the first widely-used typhus vaccine by using human louse-feeders. 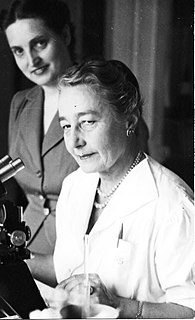 Hélène Sparrow, was a Polish medical doctor and bacteriologist. She is best known for her work on the control of many epidemics including: Typhoid fever, Cholera, Dysentery, and Smallpox. Throughought the 1920s, Sparrow worked with the Polish Armed Forces at the State Institute of Hygiene in Warsaw. While at the State Institute of Hygiene, she worked vigilantly to produce the first vaccine against Typhus and ran several large-scale vaccination campaigns to control the spread of Diphtheria and Scarlet fever all along the eastern frontiers of Poland. In 1933, Sparrow began to study flea-borne and louse-borne Rickettsia diseases in Tunis, where she became the head of her own department at the Pasteur Institute. In her later years, she expanded her studies to include Mexico and Guatemala. While in Mexico and Guatemala, Sparrow developed a protective vaccine against typhus. She contributed a great amount of research to the World Health Organization on relapsing fever specifically in Ethiopia.

A thought collective, a term originated in German as "Denkkollektiv" by the Polish and Israeli physician Ludwik Fleck, is a community of researchers who interact collectively towards the production or elaboration of knowledge using a shared framework of cultural customs and knowledge acquisition. In his 1935 book Entstehung und Entwicklung einer wissenschaftlichen Tatsache; Einführung in die Lehre vom Denkstil und Denkkollektiv, Fleck identified the scientific production of knowledge as primarily a social process that hinges upon prior discoveries and practices in a way that constrains and preconditions new ideas and concepts. He termed this shared collection of preexisting knowledge a "Denkstil" or thought style and formulated a comparative epistemology of science using these two ideas.

Kazimierz Witalis Szarski was a Polish zoologist and professor at the University of Breslau who worked extensively on ornithology and wildlife conservation in Lower Silesia.

Marian Ciepielowski was a Polish physician and scientist. A survivor of the Buchenwald concentration camp, he is best known for his activity as a saboteur within the camp's vaccine production unit. Ciepielowski's actions resulted in useful vaccines being distributed to camp inmates, while inactive and useless "vaccines" were sent to Nazi soldiers. After the war he emigrated to the United States.