He was born to Aleksander Rajchman, the creator and first director of the Warsaw Philharmonic, and Melania Hirszfeld, a socialist and women's rights activist. He was from a family of Christianized Polish Jews. While his parents were agnostic, Ludwik was baptized at birth. [2] He is the brother of Aleksander Rajchman, a prominent Polish mathematician and of Helena Radlinska, a Polish sociologist and he is the first cousin of Ludwik Hirszfeld, a Polish microbiologist. Ludwik Rajchman is the father of Jan A. Rajchman, a Polish computer scientist, inventor of magnetic-core memory.

Rajchman grew up in Warsaw in the difficult conditions of the Russian occupation. At an early age, he and his sister Helena became keenly aware of the social injustices in their "country" (Poland did not officially exist at the time) and were involved as teenagers in teaching young workers. As an adult, he joined the Polish socialist party (PPS) and was involved in the 1905 uprising and even arrested. After several months in prison he was exiled for a while to Kharkov.

Ludwik Rajchman studied medicine at the Jagiellonian University in Kraków, where he met his future wife, Marja Bojanczyk who was also a medical student. He became fascinated by bacteriology as taught to him by Odo Bujwid who had worked with Louis Pasteur. Rajchman did his post-doctoral studies at the Pasteur Institute in Paris, then briefly returned to Kraków (he was banned from going to the Russian-occupied part of Poland), before being named to a prominent bacteriological laboratory in London. Rajchman and his wife and three children remained in London throughout the First World War, during which time Rajchman was kept busy also as a PPS activist lobbying for Polish independence after the war. The family returned to Warsaw in October 1918 and Rajchman (who was well acquainted with the Polish elite thanks to his family connections) persuaded the new Polish authorities to create an epidemiological center, subsequently renamed "Państwowy Zakład Higieny" (National Institute of Hygiene) which exists in Warsaw to this day as Poland's main public health institute.

Rajchman was very active in the fight against several waves of a typhus epidemic which was devastating Eastern Europe and as such was noticed by the burgeoning League of Nations, which named him in 1921 to set up a Health Organization for the LN in Geneva, Switzerland. The Health Organization is largely regarded as one of the LN's most successful undertakings. Rajchman travelled extensively to fulfill his mandate and notably became fascinated by the need for a quarantine and public health system in China: as such he became adviser to the Chinese government and became intimate with the Chang Kai-shek family and especially with TV Soong, the then Minister of Economy and brother of Madame Chang Kai-shek. In 1924, together with Arthur Sweetser (the League of Nations' Press Officer), and the Institut Jean-Jacques Rousseau educators Adolphe Ferrière and Paul Meyhoffer, he founded the International School of Geneva - the first of its kind in the world. [3] [4] In the early 1930s, Rajchman became known in Geneva for his anti-fascist and anti-appeaser attitudes and actions. He no longer pleased politically the French appeaser director of the LN, Joseph Avenol, who dismissed him from his functions in 1938.

Finding himself without a job, Rajchman went to China to help the government prepare their defense against Japan, notably by buying airplanes from the United States. His family moved to France, purchasing a "chateau" in Sarthe, a western region of France. The whole family was there when the Germans invaded France. Rajchman went to see the President of the Polish government in exile, General Sikorski whom he knew personally. Sikorski named him to be in charge of Polish refugees and gave him a letter to take to President Roosevelt asking for US help; he also issued Rajchman a diplomatic passport which was what allowed him to flee France through Spain and Portugal and eventually reach Washington DC. During the war, Rajchman worked on humanitarian issues, [5] but also as adviser to TV Soong in development issues: indeed he was said to have belonged to the famous "Chinese Lobby". Towards the end of the war, UNRRA commissioned him to write a report on how to deal with the drastic state of health conditions once Europe would be freed (notably a typhus epidemic was feared). At the end of the war, the new (communist) Polish government in Lublin asked him to represent Poland within UNRRA. It is said that Rajchman had serious hesitations about collaborating with this government, but in the end he was won over by the desire to help his country which he did in fact very effectively through UNRRA.

When UNRRA announced at a UN meeting in Geneva that it would be putting an end to its relief efforts, Rajchman stood up before the assembly and called for the creation of a Fund dedicated to helping children throughout the world. His proposal was accepted and by the beginning of 1947, UNICEF was already helping children, notably in nutrition and immunization. Rajchman remained Chairman of the Board at UNICEF until 1950 and refused to be paid for his work. In the context of the nascent cold war and Stalinism in Soviet block countries, Rajchman was subpoenaed in the McCarthy period: he abruptly left for France and never returned to the United States. At the same time, the Polish communist authorities withdrew his Polish passport and he was not reissued one until the post-Stalinist period began in 1956. From then on Rajchman went fairly often to Poland, notably to visit his sister who had been dismissed by the authorities from her academic functions. His last visit was to Warsaw in 1963, to visit the public health institute he had founded in 1918. Rajchman died in 1965 due to complications of Parkinson's Disease. 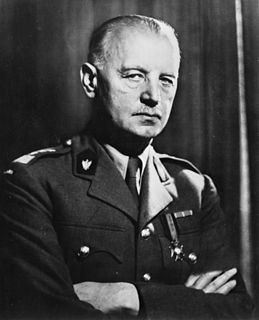 Władysław Eugeniusz Sikorski was a Polish military and political leader.

Rudolf Stefan Jan Weigl was a Polish biologist, physician, and inventor. He is most known for creating the first effective vaccine against epidemic typhus. He founded the Weigl Institute in Lwów, where he conducted vaccine research. 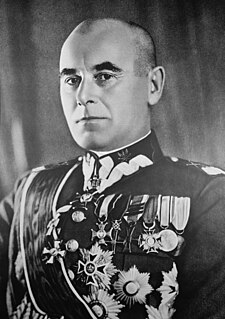 Marshal Edward Rydz-Śmigły(listen), also called Edward Śmigły-Rydz, was a Polish politician, statesman, Marshal of Poland and Commander-in-Chief of Poland's armed forces, as well as a painter and poet.

Warsaw School of Mathematics is the name given to a group of mathematicians who worked at Warsaw, Poland, in the two decades between the World Wars, especially in the fields of logic, set theory, point-set topology and real analysis. They published in the journal Fundamenta Mathematicae, founded in 1920—one of the world's first specialist pure-mathematics journals. It was in this journal, in 1933, that Alfred Tarski—whose illustrious career would a few years later take him to the University of California, Berkeley—published his celebrated theorem on the undefinability of the notion of truth.

Ludwik Fleck was a Polish and Israeli physician and biologist who did important work in epidemic typhus in Lwów, Poland, with Rudolf Weigl and in the 1930s developed the concepts of the "Denkstil" and the "Denkkollektiv".

Ludwik Hirszfeld was a Polish microbiologist and serologist. He is considered a co-discoverer of the inheritance of ABO blood types.

General Kazimierz Sosnkowski was a Polish independence fighter, general, diplomat, and architect. He was a major political figure and an accomplished commander, notable in particular for the contributions he made during the Polish–Soviet War and World War II. After the death of General Władysław Sikorski in July 1943, Sosnkowski became Commander-in-chief of the Polish Armed Forces. Sosnkowski was an intellectual and a lover of art, literature and philosophy, a linguist who knew Latin, Greek, English, French, German, Italian and Russian.

Jan Kwapiński (1885–1964), born Piotr Chałupka was a Polish independence activist and politician. A member of Combat Organization of the Polish Socialist Party, he was imprisoned by Russian Empire authorities in Warsaw Citadel. After Poland regained independence following the First World War, he became a member of Polish parliament (Sejm) after being elected in 1922 Polish legislative election. He then went on to serve as mayor of Łódź (1939). After being Soviet invasion of Poland arrested by the NKVD, then freed after the Sikorski-Mayski Agreement, he joined the London-based Polish government-in-exile as Deputy Prime Minister and Minister of Industry, Trade and Shipping, later Minister of Treasury. 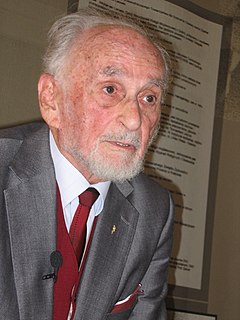 Edward Kossoy was a Polish lawyer, publicist and an activist for victims of Nazism. 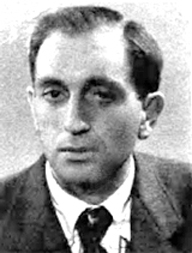 Chil (Enrique) Meyer Rajchman a.k.a. Henryk Reichman, nom de guerre Henryk Ruminowski was one of about 70 Jewish prisoners who survived the Holocaust after participating in the August 2, 1943 revolt at the Treblinka extermination camp in Poland. He reached Warsaw, where he participated in the resistance in the city, before it was captured by the Soviet Union.

Ignacy Hugo Stanisław Matuszewski was a Polish politician, publicist, diplomat, Minister of Finance of the Second Polish Republic, colonel, infantry officer and intelligence agent of the Polish Army, member of the International Olympic Committee. A strong supporter of Józef Piłsudski, he was counted among the "Colonels" and co-founded the Józef Piłsudski Institute of America.

Hélène Sparrow, was a Polish medical doctor and bacteriologist. She is best known for her work on the control of many epidemics including: Typhoid fever, Cholera, Dysentery, and Smallpox.Throughought the 1920s, Sparrow worked with the Polish Armed Forces at the State Institute of Hygiene in Warsaw. While at the State Institute of Hygiene, she worked vigilantly to produce the first vaccine against Typhus and ran several large-scale vaccination campaigns to control the spread of Diphtheria and Scarlet fever all along the eastern frontiers of Poland. In 1933, Sparrow began to study flea-borne and louse-borne Rickettsia diseases in Tunis, where she became the head of her own department at the Pasteur Institute. In her later years, she expanded her studies to include Mexico and Guatemala. While in Mexico and Guatemala, Sparrow developed a protective vaccine against typhus. She contributed a great amount of research to the World Health Organization on relapsing fever specifically in Ethiopia.

Melville Douglas Mackenzie was a British physician and epidemiologist who worked in the health section of the League of Nations and in many countries pioneering international health collaboration. After World War II, he had a prominent role in founding the World Health Organization (WHO), including the drafting of its constitution.

Adam Szymon Pragier was a Polish economist, Doctor of Jurisprudence professor at the Free Polish University, socialist activist, politician, member of the Polish Legions and writer. A minister of information and documentation in the Polish government-in-exile in London, he upheld for the rest of his life its legal continuity in the struggle for the restoration of Poland as a sovereign state.