Lukáš Beňo (born 7 November 1989) is a Slovak footballer who plays as a defender for the Slovakia club Dubnica.

Dubnica nad Váhom is a town in the Ilava District, Trenčín Region in Slovakia.

FK Dubnica is a Slovak football club, playing in the city of Dubnica nad Váhom. 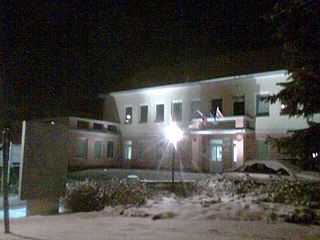 Nová Dubnica is a town in Trenčín Region, Slovakia.

Mestský futbalový štadión is a multi-use stadium in Dubnica nad Váhom, Slovakia. It is currently used mostly for football matches and is the home ground of MFK Dubnica. The stadium holds 5,450 people. The intensity of the floodlighting is 1,400 lux.

The 2003–04 Slovak Superliga was the 11th season of first-tier football league in Slovakia, since its establishment in 1993. This season started on 19 July 2003 and ended on 8 June 2004. MŠK Žilina are the defending champions.

The 2001–02 Slovak Superliga was the ninth season of first-tier football league in Slovakia, since its establishment in 1993. This season started on 14 July 2001 and ended on 8 June 2002. AŠK Inter Slovnaft Bratislava are the defending champions.

Erik Grendel is a Slovak footballer who currently plays for Spartak Trnava as a midfielder.

The 2008–09 Slovak Superliga was the 16th season of the league since its establishment. It began on 19 July 2008 and ended on 30 May 2009. FC Artmedia Petržalka were the defending champions.

The 1998–99 Slovak Superliga was the sixth season of first-tier football league in Slovakia, since its establishment in 1993. This season started on 1 August 1998 and ended on 29 May 1999. 1. FC Košice are the defending champions.

Beno is a name of various origins. In the Bible it appears in 1 Chronicles 24:26–27 where the Hebrew word בנו is rendered as "Beno" in some English translations and as "his son" in others. Beno is also a short form of Benedict in various languages. It is also a place name in multiple languages. 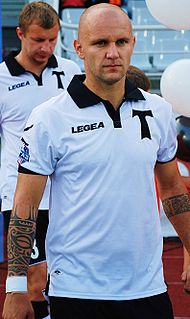 Lukáš Tesák is a former Slovak footballer who last played as a left back or left midfielder for Fortuna Liga club FK Pohronie. After his retirement, he servers as a fitness trainer at the same club.

The 1995–96 Slovak Extraliga season was the third season of the Slovak Extraliga, the top level of ice hockey in Slovakia. 10 teams participated in the league, and HC Kosice won the championship.

Miladin Vujošević is a Montenegrin footballer who currently plays as a forward for the 2. Liga club Dukla Banská Bystrica.