In photometry, luminous intensity is a measure of the wavelength-weighted power emitted by a light source in a particular direction per unit solid angle, based on the luminosity function, a standardized model of the sensitivity of the human eye. The SI unit of luminous intensity is the candela  (cd), an SI base unit.

Photometry deals with the measurement of visible light as perceived by human eyes. The human eye can only see light in the visible spectrum and has different sensitivities to light of different wavelengths within the spectrum. When adapted for bright conditions (photopic vision), the eye is most sensitive to yellow-green light at 555 nm. Light with the same radiant intensity at other wavelengths has a lower luminous intensity. The curve which measures the response of the human eye to light is a defined standard, known as the luminosity function. This curve, denoted V(λ) or

, is based on an average of widely differing experimental data from scientists using different measurement techniques. For instance, the measured responses of the eye to violet light varied by a factor of ten.[ citation needed ]

Relationship to other measures

Luminous intensity is also not the same as the radiant intensity, the corresponding objective physical quantity used in the measurement science of radiometry.

Like other SI base units, the candela has an operational definition —it is defined by the description of a physical process that will produce one candela of luminous intensity. By definition, if one constructs a light source that emits monochromatic green light with a frequency of 540 THz, and that has a radiant intensity of 1/683  watts per steradian in a given direction, that light source will emit one candela in the specified direction. [1]

The frequency of light used in the definition corresponds to a wavelength in a vacuum of 555 nm, which is near the peak of the eye's response to light. If the 1 candela source emitted uniformly in all directions, the total radiant flux would be about 18.40 mW, since there are 4π steradians in a sphere. Note that a typical modern candle produces very roughly one candela while releasing heat at roughly 80 W.

Prior to the definition of the candela, a variety of units for luminous intensity were used in various countries. These were typically based on the brightness of the flame from a "standard candle" of defined composition, or the brightness of an incandescent filament of specific design. One of the best-known of these standards was the English standard: candlepower. One candlepower was the light produced by a pure spermaceti candle weighing one sixth of a pound and burning at a rate of 120  grains per hour. Germany, Austria, and Scandinavia used the Hefnerkerze, a unit based on the output of a Hefner lamp. [2] In 1881, Jules Violle proposed the Violle as a unit of luminous intensity, and it was notable as the first unit of light intensity that did not depend on the properties of a particular lamp. All of these units were superseded by the definition of the candela.

If more than one wavelength is present (as is usually the case), one must sum or integrate over the spectrum of wavelengths present to get the luminous intensity: 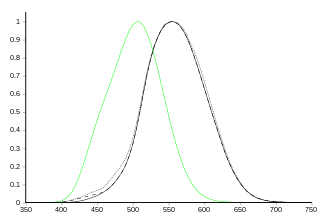 The candela is the base unit of luminous intensity in the International System of Units (SI); that is, luminous power per unit solid angle emitted by a point light source in a particular direction. Luminous intensity is analogous to radiant intensity, but instead of simply adding up the contributions of every wavelength of light in the source's spectrum, the contribution of each wavelength is weighted by the standard luminosity function. A common wax candle emits light with a luminous intensity of roughly one candela. If emission in some directions is blocked by an opaque barrier, the emission would still be approximately one candela in the directions that are not obscured.

The reflectance of the surface of a material is its effectiveness in reflecting radiant energy. It is the fraction of incident electromagnetic power that is reflected at the boundary. Reflectance is a component of the response of the electronic structure of the material to the electromagnetic field of light, and is in general a function of the frequency, or wavelength, of the light, its polarization, and the angle of incidence. The dependence of reflectance on the wavelength is called a reflectance spectrum or spectral reflectance curve. 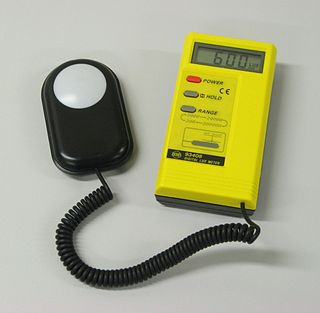 The lux is the SI derived unit of illuminance, measuring luminous flux per unit area. It is equal to one lumen per square metre. In photometry, this is used as a measure of the intensity, as perceived by the human eye, of light that hits or passes through a surface. It is analogous to the radiometric unit watt per square metre, but with the power at each wavelength weighted according to the luminosity function, a standardized model of human visual brightness perception. In English, "lux" is used as both the singular and plural form.

Candlepower is a unit of measurement for luminous intensity. It expresses levels of light intensity relative to the light emitted by a candle of specific size and constituents. The historical candlepower is equal to 1.02 candelas. In modern usage, candlepower is sometimes used as a synonym for candela.

The lumen is the SI derived unit of luminous flux, a measure of the total quantity of visible light emitted by a source per unit of time. Luminous flux differs from power in that radiant flux includes all electromagnetic waves emitted, while luminous flux is weighted according to a model of the human eye's sensitivity to various wavelengths. One lux is one lumen per square metre.

Photosynthetically active radiation (PAR) designates the spectral range of solar radiation from 400 to 700 nanometers that photosynthetic organisms are able to use in the process of photosynthesis. This spectral region corresponds more or less with the range of light visible to the human eye. Photons at shorter wavelengths tend to be so energetic that they can be damaging to cells and tissues, but are mostly filtered out by the ozone layer in the stratosphere. Photons at longer wavelengths do not carry enough energy to allow photosynthesis to take place.

The CIE 1931 color spaces are the first defined quantitative links between distributions of wavelengths in the electromagnetic visible spectrum, and physiologically perceived colors in human color vision. The mathematical relationships that define these color spaces are essential tools for color management, important when dealing with color inks, illuminated displays, and recording devices such as digital cameras. The system was designed in 1931 by the "Commission Internationale de l'éclairage", known in English as the International Commission on Illumination.