It is a subprefecture of the department and lies on the Meurthe River at its confluence with the Vezouze.

Lunéville was a renowned resort in the 18th century, known as the capital of Lorraine. The grand Château de Lunéville, built in 1702 for Leopold, Duke of Lorraine to replace an older palace, was the residence of the duke of Lorraine until the duchy was annexed by France in 1766. The château was designed in the style of Versailles to satisfy Leopold's wife, Élisabeth Charlotte d'Orléans, the niece of Louis XIV, and became known as the "Versailles of Lorraine". It includes a chapel designed by Germain Boffrand. Leopold and his wife were the parents of Prince Charles Alexander of Lorraine and Francis I, Holy Roman Emperor (through him they were the grandparents of Marie Antoinette).

The last duke of Lorraine was Stanislaus I, the former king of Poland. A devout Catholic, an author and a philanthropist, Stanislaus had a church built and several follies in his gardens for the amusement and education of visiting Polish nobility and followers of the Enlightenment. The more famous visitors to his court were Voltaire, Jean-Jacques Rousseau, André Morellet, and Montesquieu. After the death of his father-in-law in 1766, Louis XV of France annexed the duchy and turned the castle into a barracks, but much of the original construction has survived, and what remains is open to the public and the château's intricate parterre gardens, designed by Yves Hours (a pupil of André Le Nôtre) in 1711 and Louis de Nesle in 1724, are a public park today.

It was over the nearby Parroy Forest, directly east of Lunéville, only some 11 months after the outbreak of World War I, that the first aerial victory by a fighter aircraft armed with a synchronised machine gun occurred on July 1, 1915, as Lieutenant Kurt Wintgens of the German Army air force forced down an Aeronautique Militaire Morane-Saulnier L parasol monoplane. Neither member of the French air crew was seriously wounded, while the French aircraft's Gnome Lambda engine received multiple hits to disable the aircraft. [2] [3]

The Treaty of Lunéville was signed in the Treaty House, one of the houses built up against the château gardens of Lunéville on 9 February 1801, between the French Republic and the Austrian Empire by Count Ludwig von Cobenzl and Joseph Bonaparte.

Another treaty, signed in Germany, was the Treaty of Frankfurt (1871), which made Lunéville into a border town attracting the best and the brightest of Alsace and Moselle who relocated to keep their French nationality. A new period of economic prosperity, known as the Belle Époque, restored some of the glory of Stanislas's ducal court of the 18th century.

Lunéville faience, a kind of unglazed faience produced from 1723 at Lunéville by Jacques Chambrette, became the Manufacture Royale du Roi de Pologne (“Royal Factory of the King of Poland”) after Stanislaus sponsored it in 1749. The earthenware first became famous for its detailed figurines and in the 20th century for its art deco designs, and it still exists today as "Terres d'Est". [4]

In 1858, the glass factory of Croismare was built. It became famous when the Müller brothers settled there in 1897 and began creating Art Deco glass designs.

Louis Ferry-Bonnechaux discovered a technique using beads and sequins on embroidery in 1865. His craft was widely copied and became known as Lunéville Point, and its heritage can still be seen in modern haute couture.

A subsidiary of the Dietrich company, Lorraine-Dietrich moved to Luneville after the 1871 treaty of Frankfurt. Today it is known for its trailers, but it started off as a manufacturer of cars and railway equipment.

Lunéville was the birthplace of : 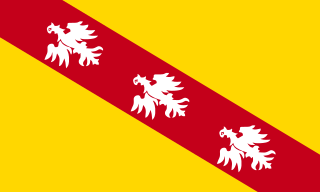 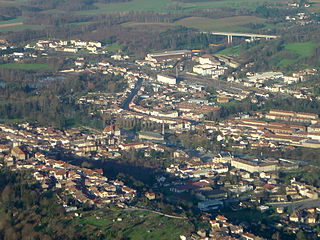 Baccarat is a French commune in the Meurthe-et-Moselle department in the Grand Est region of north-eastern France. 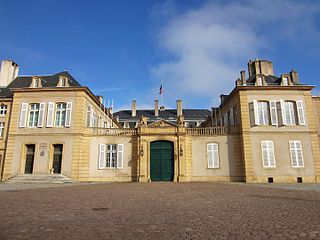 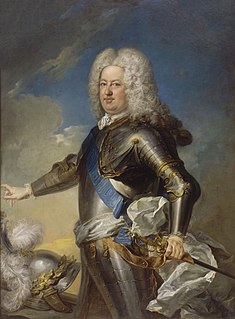 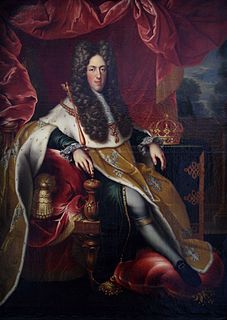 Leopold, surnamed the Good, was Duke of Lorraine and Bar from 1690 to his death. He is the ancestor of all rulers of the Habsburg-Lorraine dynasty, including all Emperors of Austria. 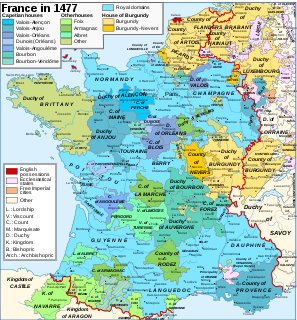 The County of Bar was a principality of the Holy Roman Empire encompassing the pays de Barrois and centred on the city of Bar-le-Duc. It was held by the House of Montbéliard from the 11th century. Part of the county, the so-called Barrois mouvant, became a fief of the Kingdom of France in 1301 and was elevated to the Duchy of Bar in 1354. The Barrois non-mouvant remained a part of the Empire. From 1480, it was united to the imperial Duchy of Lorraine. 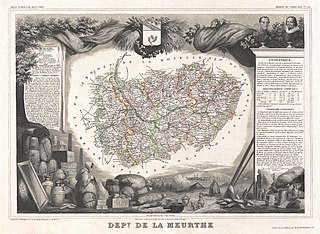 Meurthe is a former department of France created in 1790. Its prefecture (capital) was Nancy. It ceased to exist following the annexation of Alsace-Lorraine by Germany in 1871. 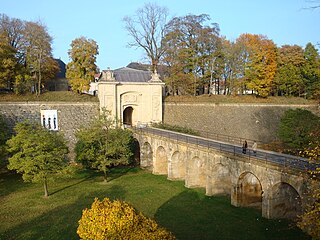 Longwy is a commune in the Meurthe-et-Moselle department in northeastern France. 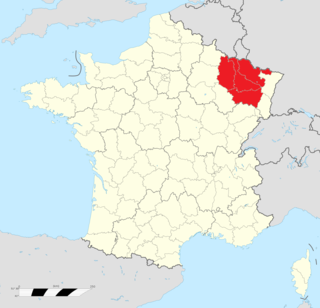 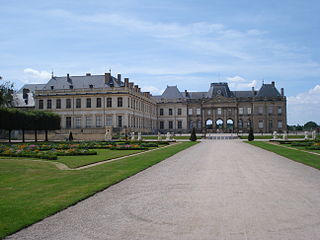 The Château de Lunéville which had belonged to the Dukes of Lorraine since the thirteenth century, was rebuilt as “the Versailles of Lorraine” by Duke Léopold from 1703 to 1723, from designs of Pierre Bourdict and Nicolas Dorbay and then of the architect Germain Boffrand, whose masterwork it became. It became the home of King Stanisław Leszczyński, last duke of Lorraine and Bar. 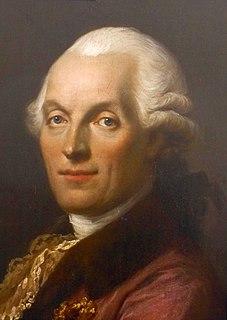 Richard Mique was a neoclassical French architect born in Lorraine. He is most remembered for his picturesque hamlet, the Hameau de la Reine — not particularly characteristic of his working style — for Marie Antoinette in the Petit Trianon gardens within the estate of Palace of Versailles. 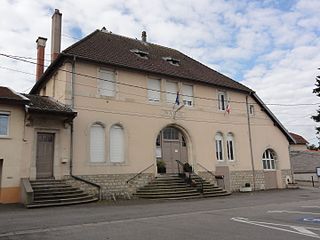 Chanteheux is a commune in the Meurthe-et-Moselle department in north-eastern France.

Anne Charlotte of Lorraine was the Abbess of Remiremont and Mons. She was the thirteenth of fifteen children of Leopold, Duke of Lorraine, and his spouse Élisabeth Charlotte d'Orléans. Her mother was the niece of Louis XIV of France and sister of Philippe II, Duke of Orléans and Regent of France during the minority of Louis XV. 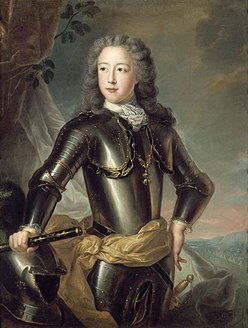 Léopold Clément, Hereditary Prince of Lorraine was heir apparent to the throne of the sovereign Duchy of Lorraine. 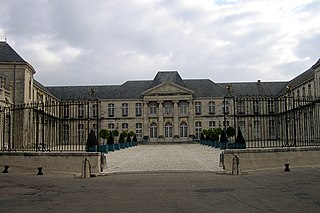 The Château de Commercy is a castle in the town of Commercy, in the Meuse department of France. It was the principal residence of the reigning Prince of Commercy and was built by Charles Henri de Lorraine. The site, château and grounds, was classified Monument historique in 1960, with the roofs and façades of the wings being classified in 1972. 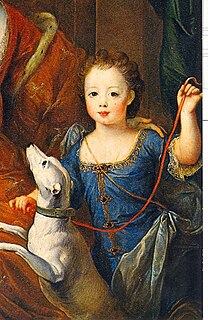 Louis, Hereditary Prince of Lorraine was heir apparent to the throne of the sovereign Duchy of Lorraine. 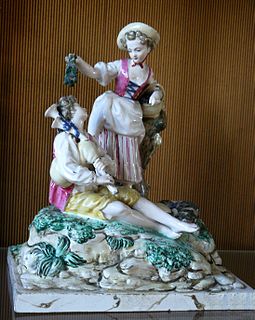 Luneville Faience is one of the most famous French pottery manufacturers. It has been located in Lunéville, Lorraine, France since 1730. 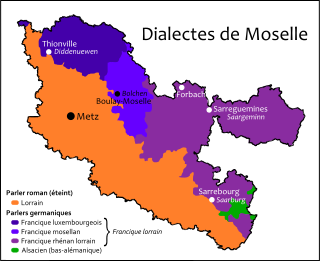 The region of German Lorraine was the German-speaking part of Lorraine, now in France, that existed for centuries until into the 20th century. The name is also used more specifically in to refer to Bezirk Lothringen, that part of Lorraine that belonged to the German Empire from 1871–1918.

Anne Charles Basset de Montaigu, born 10 June 1751 in Versailles (Yvelines), died 8 May 1821 at Luneville was a general of the French Revolutionary and Napoleonic wars. Tainted by his association with Charles Pichegru, he was cleared by a courts-martial in 1797, and served subsequently in the Army of the Danube and in the Grande Armée until his retirement from military service in 1811.