In music, the Lydian augmented scale (Lydian ♯5 scale) is the third mode of the ascending melodic minor scale or jazz minor scale.

Starting on C, the notes would be as follows:

Generically the whole and half steps are:

D is a musical note a whole tone above C, and is known as Re within the fixed-Do solfege system. An enharmonic note is C, which is a diatonic semitone below D♯. 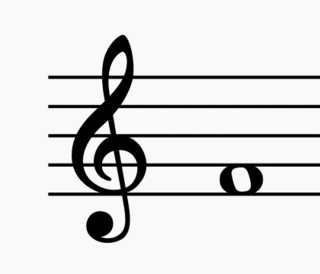 F is a musical note, the fourth above C. It is also known as fa in fixed-do solfège. It has enharmonic equivalents of E♯ and G, amongst others.

B♭ is the eleventh step of the Western chromatic scale . It lies a diatonic semitone above A and a chromatic semitone below B, thus being enharmonic to A♯, even though in some musical tunings, B♭ will have a different sounding pitch than A♯. B-flat is also enharmonic to C.

In jazz music, the lydian chord is the major 7♯11 chord, or ♯11 chord, the chord built on the first degree of the Lydian mode, the sharp eleventh being a compound augmented fourth. This chord, built on C, is shown below.

In music, the Romanian Minor scale or Ukrainian Dorian scale or altered Dorian scale is a musical scale or the fourth mode of the harmonic minor scale. It is "similar to the dorian mode, but with a tritone and variable sixth and seventh degrees". It is related to both the Freygish and Misheberak scales and is used in Jewish music, "predominant in klezmer bulgarish and doina (doyne)." "When the Ukrainian Dorian scale functions in the synagogue, it is a mode known as the Mi sheberach or Av horachamon. Arab and Greek scholars give other names to the scale: Nikriz (نكريز) and Aulos, respectively."

The jazz minor scale is a derivative of the melodic minor scale, except only the ascending form of the scale is used. As the name implies, it is primarily used in jazz. It may be derived from the major scale with a minor third, making it a synthetic scale, and features a dominant seventh chord on the fifth degree (V) like the harmonic minor scale.

Romanian major, also known as lydian dominant flat 2 or flat 9, is a musical scale, noted for its flattened 2nd and sharpened fourth degrees, the latter a distinctive feature of Romanian traditional music. A C Romanian major scale has the notes C, D♭, E, F♯, G, A, B♭, which is 1, ♭2, 3, ♯4, 5, 6, ♭7. Though it is called a major scale, it is typically played over a C13 dominant chord. This is an enharmonic mode of B Harmonic Minor, along with D Harmonic Major. The root note of F Harmonic Major is raised a semitone to F#, and the root note of D Aeolian Dominant lowered a semitone to Db. There is also a ♮6 with the Db Super Lydian Augmented scale, lowering the B♮ to Bb.