Lynden David Hall (7 May 1974 – 14 February 2006) [1] was an award-winning English singer, songwriter, arranger, and record producer who emerged during the late 1990s as part of the neo soul movement. [2] In 1999, he was the first UK performer ever voted "Best Male Artist" by the readers of Britain's Blues & Soul magazine. His debut album, Medicine 4 My Pain , as well as the singles "Do I Qualify" and "Sexy Cinderella", had an instant appeal to soul fans in the UK and elsewhere, but it was not until his work got remixed that he got his major breakthrough. In October 2003, Hall was diagnosed with Hodgkin's lymphoma; he died on 14 February 2006, at the age of 31, from complications resulting from the stem cell transplant he received in January 2005.

Born in Wandsworth, South London, he won the "best newcomer" accolade at the 1998 MOBO (Music of Black Origin) Awards.

In 1999, he was the first UK performer ever voted "Best Male Artist" by the readers of Britain's Blues & Soul magazine. His debut album, Medicine 4 My Pain , as well as the singles "Do I Qualify" and "Sexy Cinderella", had an instant appeal to soul fans in the UK and elsewhere, but it was not until his work got the remix treatment that he got his major breakthrough.

Hall appeared in the film Love Actually in 2003, where he sang at the wedding of the characters played by Keira Knightley and Chiwetel Ejiofor. Two years later, he released his third studio album, In Between Jobs , on the independent record label Random Records.

In October 2003, Hall was diagnosed with Hodgkin's lymphoma; he died on 14 February 2006, at the age of 31, from complications resulting from the stem cell transplant he received in January 2005. Hall was in remission at the time of his death. Hall is survived by his wife Nikki Hall. [3]

Shortly before he died, while in hospital in November 2005, Hall and his wife achieved their wish to help others suffering by putting on the successful Lynden's Wish concert at London's Jazz Café. For the first time, selected black British music artists came together in Hall's honour to raise money for two charities close to his heart: The African Caribbean Leukaemia Trust, and Rays of Sunshine, a children's charity. Lynden's Wish, a registered charity, remains his legacy.

On 23 May 2006, a Lynden's Wish memorial celebration was held in his honour at Kensington Roof Gardens. Two white doves were released as a symbol of peace, accompanied by the London Community Gospel Choir, who sang "All You Need is Love" as performed by Hall in the film Love Actually . Many of the artists who performed the previous year's concerts also performed tributes, including Omar, Roachford and Don-E. All proceeds were donated to the African Caribbean Leukaemia Trust. 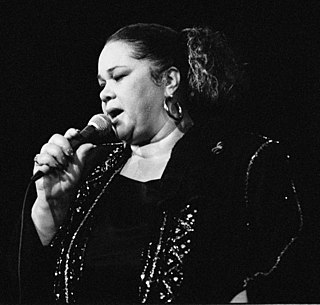 Etta James was an American singer who performed in various genres, including blues, R&B, soul, rock and roll, jazz and gospel. Starting her career in 1954, she gained fame with hits such as "The Wallflower", "At Last", "Tell Mama", "Something's Got a Hold on Me", and "I'd Rather Go Blind". She faced a number of personal problems, including heroin addiction, severe physical abuse, and incarceration, before making a musical comeback in the late 1980s with the album Seven Year Itch.

Billy Ocean is a Trinidadian-English recording artist who had a string of R&B international pop hits in the 1970s and 1980s. He was the most popular Trinidad–British R&B singer-songwriter of the early to mid-1980s. After scoring his first four UK Top 20 successes, seven years passed before he accumulated a series of transatlantic successes, including three US No. 1's. His 1985 hit "When the Going Gets Tough, the Tough Get Going" reached No. 1 in the UK and No. 2 in the US. In 1985, Ocean won the Grammy Award for Best Male R&B Vocal Performance for his worldwide hit "Caribbean Queen " and in 1987 was nominated for the Brit Award for Best British Male Artist. His 1988 hit "Get Outta My Dreams, Get into My Car" reached No. 1 in the US and No. 3 in the UK. His 1986 hit "There'll Be Sad Songs " also reached No. 1 in the US. 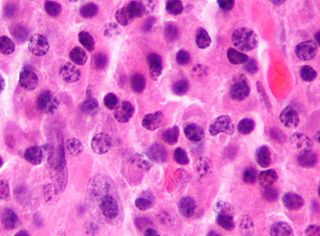 Levi Stubbs was an American baritone singer, best known as the lead vocalist of the R&B group the Four Tops, who released a variety of Motown hit records during the 1960s and 1970s. He has been noted for his powerful, emotional, dramatic style of singing. 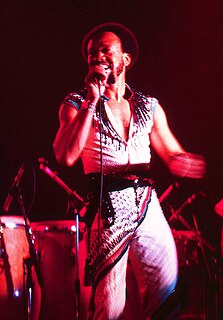 Anthony Nolan is a UK charity that works in the areas of leukaemia and hematopoietic stem cell transplantation. It manages and recruits donors to the Anthony Nolan Register, which is part of an aligned registry that also includes the Welsh Bone Marrow Donor Registry, NHS Blood and Transplant's British Bone Marrow Registry and Deutsche KnochenMarkSpenderdatei (DKMS) UK. This aligned register is known as the Anthony Nolan & NHS Stem Cell Registry. It also carries out research to help make bone marrow transplants more effective. 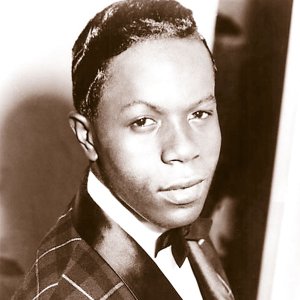 Bloodwise is a UK based charity dedicated to funding research into all blood cancers including leukaemia, lymphoma and myeloma, as well as to offering information and support to blood cancer patients.

Chris Jones was an American musician and composer. He was born in Reno, Nevada and lived in Germany ever since he had joined the United States Army.

Alistair Ian Campbell is an English singer and songwriter who was the lead singer and a member of the English reggae band UB40. As part of UB40, Campbell sold over 70 million records worldwide and toured the globe for 30 years. In 2008, Campbell left UB40 due to a dispute with band management so he then embarked on a solo career. In 2012, Campbell was announced as one of the three judges on the judging panel of the TV show, New Zealand's Got Talent. In August 2014, Campbell announced that he had reunited with former UB40 band mates Astro and Mickey to record a new album, Silhouette, released on 6 October 2014.

This is a summary of 2006 in music in the United Kingdom.

Heritage is the fifteenth studio album by Earth, Wind & Fire, released in February 1990 on Columbia Records. The album reached No. 19 on the US Billboard Top R&B Albums chart and No.18 on the UK Blues & Soul Top British Soul Albums chart.

Hodgkin lymphoma (HL) is a type of lymphoma in which cancer originates from a specific type of white blood cells called lymphocytes. Symptoms may include fever, night sweats, and weight loss. Often there will be non-painful enlarged lymph nodes in the neck, under the arm, or in the groin. Those affected may feel tired or be itchy.

Medicine 4 My Pain is the debut album by British R&B singer Lynden David Hall, released in September 1997 on the Cooltempo label. The album was a critical success, and was instrumental in Hall's winning the 'Best Newcomer' award at the 1998 MOBO ceremony. Paying tribute after Hall's death in 2006, disc jockey Ronnie Herel described Medicine 4 My Pain as "a landmark album for UK black music". 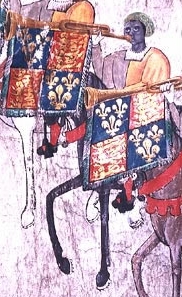 The Simon Flavell Leukaemia Research Laboratory is based at Southampton General Hospital and named after ten-year-old Simon Flavell who died in 1990 from an aggressive form of T-cell acute lymphoblastic leukemia (ALL). The laboratory specialises in researching and developing antibody type treatments for adults and children with currently incurable types of leukaemia.

David J. Flavell FRCPath is a British academic research scientist specialising in the development of antibody-based treatments for adults and children with various forms of leukaemia and lymphoma.