Lyudmila Vasilyevna Maksakova (Russian : Людмила Васильевна Максакова; born 26 September 1940) is a Soviet Russian stage and film actress who appeared in 24 films between 1965 and 1998. Honoured with the People's Artist of Russia title in 1980, she is also a laureate of the USSR State Prize (1995) and the Stanislavsky Prize (1996). [1] Her mother was the renowned mezzo-soprano Maria Maksakova Sr.; her daughter Maria is an opera singer and Russian TV Kultura presenter. [2]

Lyudmila Maksakova was born in Moscow to the Soviet opera star Maria Petrovna Maksakova and Aleksander Volkov, a theatre entrepreneur. In 1942 the latter defected to the West and later became a United States citizen. For decades Lyudmila remained unaware of her father's identity. By keeping it secret, Maria Petrovna was protecting her daughter from trouble at the times when any relation to a 'traitor' could lead to prosecution. According to another version, though, Lyudmila's father might have been the NKVD general Vasily Novikov, who granted Lyudmila Vasilyevna her patronymic, and there were even rumours pointing at Stalin himself, who was known to have favoured the famous Bolshoi singer. [3]

After the simultaneous graduation from a secondary school, and the Moscow Central music school where she studied cello, Lyudmila opted against pursuing a musical career and enrolled at the Shchukin Theatre Institute to join the actor Vladimir Etush's class. In 1961 she joined the Vakhtangov Theater where she debuted as Masha in The Cookie's Marriage (after Anatoly Sofronov's comedy). [1] [4] Her breakthrough came two years later when she played the Tatar Princess Adelma in the much acclaimed Vakhtangov production of Princess Turandot, revived by director Ruben Simonov. Among her other lauded performances were those of Lolya (Dion), Knipper-Chekhova (My Whimsical Happiness), Nicol ( Le Bourgeois gentilhomme ), Maria (The Cavalry Army, after Babel) and Mamayeva (Enough Stupidity in Every Wise Man). [1]

In 1964 Maksakova debuted in film, as Nina in Grigory Chukhray's There Was an Old Couple . Over the next decade she appeared in more than fifteen films, including the revolutionary history drama Tatiana's Day (1967), the psychological melodrama Not Guilty (1969), the tragic melodrama The Bad Good Man (1973) and the psychological drama Autumn (1974). [1] Among other critically acclaimed films she appeared in later, were Old Russian Vaudevilles' Evening (1979, where she played five different women), Igor Talankin's drama Father Sergius (after Leo Tolstoy's short story) and Die Fledermaus , Ian Frid's musical film after Johann Strauss Strauss' classic, alongside Yuri and Vitaly Solomin. [1]

The early 1980s saw Maksakova enjoying her second wave of success in theatre. Much lauded were her Anna Karenina in Roman Viktyuk's 1983 production (based on Mikhail Roshchin's remake of Leo Tolstoy's novel), Paola in The Lady Without Camellias (after Terence Rattigan's play), Bizyukina in Soboryane (based on Leskov's novel) and Louise in I Don't Know You From Now On, Dear (after Aldo De Benedetti's play). [5] Her performance in Pyotr Fomenko's production of Guilty Without Fault by Alexander Ostrovsky, earned Maksakova the USSR State Prize in 1995, and the Stanislavsky Prize a year later. In 2000s Maksakova started to teach at the Shchukin Theater Institute; her appearances on stage and on screen became rare and far between. [1]

Lyudmila Maksakova's first husband was the artist Lev Zbarsky (who in 1972 departed to Israel, then to the USA); they had a son, Maxim. In the mid-1970s Maksakova married Peter Igenbergs, a West German citizen. On 24 July 1977, she gave birth to a daughter, Maria, an opera singer and TV presenter. [1]

Lyudmila Vasilyevna Zhuravleva is a Soviet, Russian and Ukrainian astronomer, who worked at the Crimean Astrophysical Observatory in Nauchnij, where she discovered 213 minor planets.

Yury Vasilyevich Yakovlev was one of the most popular and critically acclaimed Soviet film and theatre actors. He was named People's Artist of the USSR in 1976.
Yakovlev has played over 100 roles in theater and cinema and is well known for his roles in Soviet comedies.

Lyudmila Markovna Gurchenko, was a popular Soviet and Russian actress, singer and entertainer. People's Artist of the USSR (1983).

Tatiana Yevgenyevna Samoilova was a Soviet and Russian film actress best known for her lead role in The Cranes Are Flying (1957). She received a number of awards for the film, including a special mention at the Cannes Film Festival. Samoilova had several major roles in the 1960s before largely disappearing from public life. In 1993, she was named a People's Artist of Russia. She made a comeback in the 2000s and received a Lifetime Achievement Award at the 2007 Moscow Film Festival.

Lyudmila Vasilyevna Marchenko was a Soviet film actress. She appeared in twelve films between 1959 and 1976. She starred in the film A Home for Tanya, which competed for the Palme d'Or at the 1959 Cannes Film Festival. 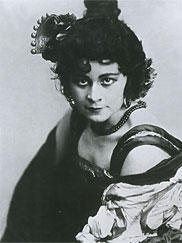 Maria Petrovna Maksakova was a Soviet opera singer, mezzo-soprano, a leading soloist in the Bolshoi Theater (1923–1953), who enjoyed great success in the 1920s and 1930s, in the times often referred to as the golden age of Soviet opera. Maria Maksakova, the three times laureate of the Stalin's Prize, was designated as a People's Artist of the USSR in 1971. The actress Lyudmila Maksakova is her daughter; singer and TV presenter Maria Maksakova Jr. her granddaughter.

Lyudmila Vasilyevna Tselikovskaya was a Russian actress, best remembered for her leading parts in films like Hearts of the Four (1941–1944), Anton Ivanovich Gets Angry (1941), The Aerial Cabman (1943), Ivan the Terrible (1944), Twins (1945) and The Busy Estate (1946). She had a troubled artistic career and received her People's Artist of the RSFSR title only in 1963. Ignored by the officialdom, Tselikovskaya was admired by the general public and is revered as a true legend of the Soviet War time cinema.

Maksim Aleksandrovich Sukhanov is a Soviet and Russian actor, producer, theatrical composer, and restaurateur. His film credits include The Goddess, The Horde, The Country of Deaf and The Role. He was awarded the State Prize of the Russian Federation in 1996 and 2001.

Lyudmila Alekseevna Perepyolkina was a Soviet-Russian stage and film actress.

Lyudmila Vasilyevna Zajtseva is a Soviet and Russian film actress, People's Artist of the RSFSR (1989) and laureate of the State Prize of the USSR (1983). Her movie career began in 1967. 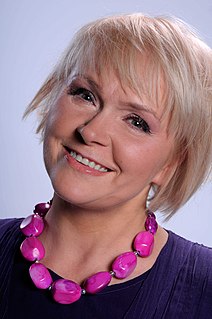 Faina Vasilyevna Shevchenko was a Russian and Soviet stage and film actress, the People's Artist of the USSR (1948) and the recipient of several high-profile state awards and twice the Stalin Prize laureate. 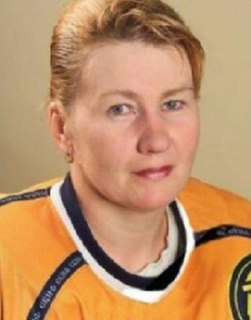 Lyudmila Petrovna Yurlova was a Russian ice hockey forward. She was part of the national teams that won a silver medal at the 1996 European Championships and a bronze at the 2001 World Championships.

Sofya Vasilyevna Khalyutina was a Russian and Soviet stage actress, associated with Moscow Art Theatre which she started to perform at in 1898, officially joined in 1901 and spent half a century with.

Lyudmila Vasilyevna Borozna is a volleyball player for the Soviet Union.She was part of the Soviet team which won the Gold medal in Women's Volleyball at the 1972 Summer Olympics.

Polina Ilinichna Chernyshova is a Russian theater and film actress. She is best known for her role in the film Furious (2017).