Møllergata 19 is an address in Oslo, Norway where the city's main police station and jail was located. The address gained notoriety during the German occupation from 1940 to 1945, when the Nazi security police kept its headquarters here. This is also where Vidkun Quisling in 1945 surrendered to the legitimate Norwegian government and was imprisoned.

Although the site was owned by the city government since the 17th century, it was not until 1857 that the city of Kristiania decided to put the site to use as a center for law enforcement. Based on the drawings by Jacob Wilhelm Nordan, construction for the complex started in 1862 and was finished in 1866. [1]

Facing Youngstorget (which then was called Nytorvet), was the police station and courtrooms; behind these was the jail. A floor was added in the late 1870s. Though some of the capacity was moved to a new prison in Åkebergveien (known as "Bayern"), the structure continued to serve as a prison and central police station until the new police building at Grønlandsleiret was finished. The prison was demolished and replaced with a new office building, and the police station was taken over by the government. [2]

Youngstorget is a square and public space located in downtown Oslo. It lies at the junction of the streets Storgata and Møllergata and alongside Torggata. Constructed in 1846, it has become a symbol of political power in Norway.

Åkebergveien is a street in Oslo, Norway. The street is named after the former farm Åkeberg.

Immediately upon arriving in Norway, the German army commandeered Møllergata 19 for its own purposes, and the first prisoners were British subjects suspected of being clandestine agents, arrested on 10 April. The following day, a Norwegian was also detained for showing contempt for the German forces. By August, the prison was solely used for prisoners arrested by the Nazi authorities. The official capacity was 145 prisoners, but the Germans kept up to 550 at a time. Prisoners held here were often subject to interrogation and torture at Victoria Terrasse. [3]

Grini prison camp was a Nazi concentration camp in Bærum, Norway, which operated between 1941 and May 1945. Ila Detention and Security Prison is now located here. 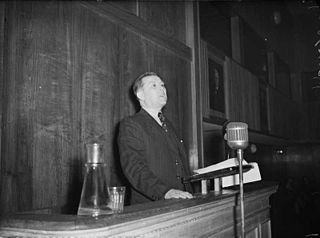 Nils Hønsvald was a Norwegian newspaper editor and politician for the Labour Party. He was one of the leading figures in Norwegian politics from 1945 to 1969. He served as President of the Nordic Council in 1958 and 1963.

The legal purge in Norway after World War II took place between May 1945 and August 1948 against anyone who was deemed to have collaborated with the German occupation of the country. Several thousand Norwegians and foreign citizens were tried and convicted for crimes committed in Scandinavia during the Second World War. However, the scope, legal basis, and fairness of these trials has since been a matter of some debate. A total of 40 people—including Vidkun Quisling, the Prime Minister of Norway during the occupation—were executed after capital punishment was reinstated in Norway. A further five were sentenced to death in Poland in 1947 for their actions in Norway.

In 1941–1942 during the German occupation of Norway, there were at least 2,173 Jews in Norway. At least 775 of them were arrested, detained and/or deported. More than half of the Norwegians who died in camps in Germany were Jews. 742 Jews were murdered in the camps and 23 Jews died as a result of extrajudicial execution, murder and suicide during the war, bringing the total of Jewish Norwegian dead to at least 765 Jews, comprising 230 complete households. "Nearly two-thirds of the Jews in Norway fled from Norway". Of these, around 900 Jews were smuggled out of the country by the Norwegian resistance movement, mostly to Sweden but some also to the United Kingdom. Between 28 and 34 of those deported survived their continued imprisonment in camps —and around 25 returned to Norway after the war.

Wanda Maria Heger was a Norwegian social worker noted for her efforts to help Norwegian and other prisoners in Nazi concentration camps during World War II.

Storm Willads Weinholdt was a Norwegian resistance member who was executed during the occupation of Norway by Nazi Germany.

Henning Bremer Bødtker was a Norwegian jurist and civil servant. He was the Attorney General of Norway from 1945 to 1962.

Per Jacobsen was a Norwegian figure skater, and a resistance member who was killed during World War II. 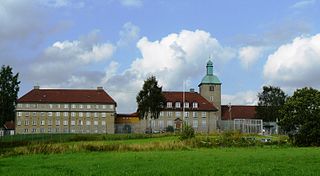 Bredtveit Prison is a prison located in the neighborhood of Bredtvet in Oslo, Norway. During World War II it was a concentration camp.

Arne Jostein Ingebrethsen was a Norwegian newspaper editor who was killed during the occupation of Norway by Nazi Germany.

Harry Söderman was a Swedish police officer and criminalist. In his native Sweden he went by the nickname Revolver-Harry. 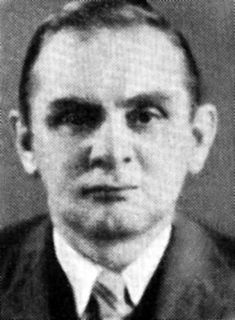