listen ); English: Møre and Romsdal) is a county in the northernmost part of Western Norway. It borders the counties of Trøndelag, Innlandet, and Vestland. The county administration is located in the town of Molde, while Ålesund is the largest town. The county is governed by the Møre og Romsdal County Municipality which includes an elected county council and a county mayor. The national government is represented by the county governor.

For hundreds of years (1660-1919), the region was called Romsdalen amt , after the Romsdalen valley in the present-day Rauma Municipality. The Old Norse form of the name was Raumsdalr. The first element is the genitive case of a name Raumr derived from the name of the river Rauma, i.e. "The Dale of Rauma". Raumr may refer to stream or current, [4] or to booming or thundering waterfalls like Sletta waterfall. [5] A purely legendary approach to the name refers to Raum the Old, one of the sons of Nór, the eponymous Saga King of Norway.[ citation needed ][ disputed – discuss ] Since the majority of the residents of the county lived in the Sunnmøre region, there was some controversy over the name. In 1919, many of the old county names were changed and this county was renamed Møre fylke .

The name Møre was chosen to represent the region where the majority of the county residents lived. That name is dative of Old Norse: Mǿrr (á Mǿri) and it is probably derived from the word marr referring to something wet like bog (common along the outer coast) or the sea itself. The name is interpreted as "coastland" or "bogland". Møre was originally the name of the coastal area from Stad and north including most of Fosen. [6] (There is also a coastal district in Sweden that has the same name: Möre.) The change in name from Romsdalen to Møre was controversial and it did not sit well with the residents of the Romsdal region. Finally in 1936, the name was changed again to a compromise name: Møre og Romsdal (English: Møre and Romsdal).

The coat of arms was granted on 15 March 1978. It shows three gold-colored Viking ships on a blue background. Shipping and shipbuilding were historically very important to the region, so boats were chosen as the symbol on the arms. The masts on the Viking ships form crosses, which symbolize the strong Christian and religious beliefs as well as the strong religious organisations in the county. There are three boats to represent the three districts of the county: Sunnmøre, Romsdal and Nordmøre. [7]

Traditionally, the county has been divided into three districts. From north to south, these are Nordmøre, Romsdal, and Sunnmøre. Although the districts do not have separate governments and despite modern road, sea and air connections throughout the county, the three districts still have their own identities in many ways. Historically speaking, connections have been stronger between Nordmøre and Sør-Trøndelag to the north, Romsdal and Oppland to the east, and Sunnmøre and Sogn og Fjordane to the south, than internally. Differences in dialects between the three districts bear clear evidence of this. Due to geographical features, the county has many populated islands and is intersected by several deep fjords. Due to its difficult terrain, Møre og Romsdal has been very dependent on boat traffic, and its main car ferry company, MRF, has existed since 1921.

Møre og Romsdal has six settlements with town status. The largest three (Ålesund, Kristiansund, and Molde) were towns long before 1993 when municipalities were given the legal authority to grant town status rather than just the King (and government). This change in law led to an increase in the number of towns (Fosnavåg, Åndalsnes, and Ulsteinvik were all added after this time). The county contains many other urban settlements (as defined by Statistics Norway) without town status, every municipality except for Halsa and Smøla contain at least one. As of 1 January 2018, there were 192,331 people (about 72 percent of the population) living in densely populated areas in the county while only 73,946 people lived in sparsely populated areas. [8] The population density is highest near the coast, with all of the county's towns located on saltwater.

The largest town in the county is Ålesund, with a population of 52,626 in the agglomeration which it forms together with parts of Sula.

There is one railway, the Rauma Line, which starts at Åndalsnes and connects to the main railway network of Norway. Public buses are operated by the county, using the brand name Fram.

In 2019, archaeologists from the Norwegian Institute for Cultural Heritage Research, using large-scale high-resolution georadar technology, determined that a 17 meter long Viking ship was buried on the island of Edøya near Edøy Church. They estimate the ship's age as over 1,000 years: from the Merovingian or Viking period; the group planned to conduct additional searches in the area. A similar burial was found previously by a NIKU team in 2018, in Gjellestad. [17]

Halsa is a former municipality in Møre og Romsdal county, Norway. The municipality existed from 1838 until 2020 when it became part of Heim Municipality. It was part of the Nordmøre region. The administrative centre of Halsa was the village of Liabøen. Other villages in the municipality included Todalen, Halsanaustan, Valsøyfjord, Engan, Hjellnes, and Valsøybotnen.

Norddal is a former municipality in Møre og Romsdal county, Norway. It merged with Stordal municipality to establish the new Fjord municipality in 2020. It covered the easternmost part of the Sunnmøre region along the border with Oppland county. The municipal center of the municipality was the village of Sylte in the Valldalen valley.

Aure is a municipality in Møre og Romsdal county, Norway. It is part of the region of Nordmøre. The administrative centre is the village of Aure. Other villages in Aure include Gullstein, Stemshaug, Todalen, Tjeldbergodden, Arasvika, and Tømmervåg. Aure has one of the largest wooden churches in Norway, Aure Church. 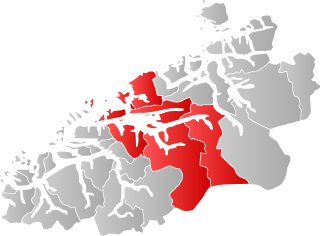 Romsdal is a traditional district in the Norwegian county Møre og Romsdal, located between Nordmøre and Sunnmøre. The district of Romsdal comprises Aukra, Fræna, Midsund, Molde, Nesset, Rauma, Sandøy, and Vestnes. It is named after the valley of Romsdalen, which covers part of Rauma. 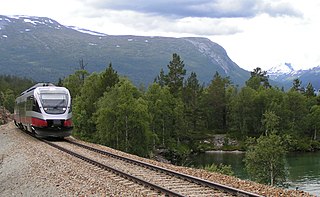 The Rauma Line is a 114.2 kilometres (71.0 mi) long railway between the town of Åndalsnes, and the village of Dombås, in Norway. Running down the Romsdalen valley, the line opened between 1921 and 1924 as a branch of the Dovre Line, which connects to the cities of Oslo and Trondheim. Originally intended as the first stage to connect Ålesund, and possibly also Molde and Kristiansund, no extensions have ever been realized. The unelectrified line is served four times daily with Norwegian State Railways' Class 93, although in the summer the service only operates from Åndalsnes to Bjorli as a tourist service. CargoLink operates a daily freight train.

Nordmøre is a traditional district in the Norwegian county of Møre og Romsdal. The 5,426-square-kilometre (2,095 sq mi) area comprises the northern third of the county including the municipalities of Kristiansund, Averøy, Tingvoll, Surnadal, Aure, Halsa, Eide, Sunndal, Gjemnes, and Smøla. The only town in Nordmøre is Kristiansund.

Åndalsnes (help·info) is a town in Rauma Municipality in Møre og Romsdal county, Norway. Åndalsnes is in the administrative center of Rauma Municipality. It is located along the Isfjorden, at the mouth of the river Rauma, at the north end of the Romsdalen valley. The village of Isfjorden lies about 7 kilometres (4.3 mi) to the east, Veblungsnes lies just to the west across the Rauma, and Innfjorden lies about 10 kilometres (6.2 mi) to the southwest via the European Route E136 highway.

Sylte may refer to:

SpareBank 1 Nordvest is a Norwegian savings bank with branches in Nordmøre in addition to Molde and Ålesund. The bank has 11 branch offices with a head office in Kristiansund and has total assets of NOK 5 billion. The bank is part of the bank alliances SpareBank 1 and Samarbeidende Sparebanker.

Nordmøre Energiverk is a power company based in the town of Kristiansund in Møre og Romsdal county, Norway. The company operates hydroelectric power plants and the power grid in the municipalities of Aure, Averøy, Kristiansund, Smøla and Tingvoll. Along with the municipalities, TrønderEnergi owns 49% of the company. The company also operates fiberoptic broadband in the region. 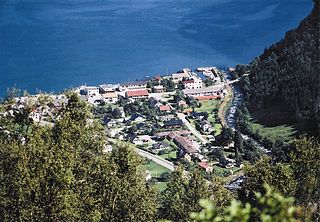 Eidsdal is a village and valley in Fjord Municipality in Møre og Romsdal county, Norway. It is located along the south side of the Norddalsfjorden, about 7 kilometres (4.3 mi) southwest of the municipal centre of Sylte and the village of Norddal lies about 4 kilometres (2.5 mi) east of Eidsdal. The local church, Norddal Church is located in nearby Norddal village. Eidsdal has approximately 400 inhabitants.

Storfjorden or Storfjord is a 110-kilometre (68 mi) long fjord in the Sunnmøre region of Møre og Romsdal county, Norway. It stretches from the village of Hareid in the west to the villages of Tafjord and Geiranger in the east. The Storfjorden system branches off into several smaller fjords including the famous Geirangerfjord and Tafjorden. At the village of Stranda, the main fjord branches off into the Sunnylvsfjorden-Geirangerfjorden to the west and the Norddalsfjorden-Tafjorden to the east.

Sunnmøre District Court is a district court located in the town of Ålesund in Møre og Romsdal county, Norway. The court serves most of the southern third of the county, except the far southern part, and it includes the municipalities of Ålesund, Giske, Haram, Hareid, Norddal, Skodje, Stordal, Stranda, Sula, Sykkylven, Ulstein and Ørskog. The court is subordinate to the Frostating Court of Appeal. The court is led by the chief judge Kirsti Høegh Bjørneset. This court employs a chief judge, seven other judges, and several prosecutors.

Nordmøre District Court is a district court located in the town of Kristiansund in Møre og Romsdal county, Norway. The court serves the northern part of the county which includes the municipalities of Kristiansund, Aure, Averøy, Eide, Gjemnes, Halsa, Smøla, Sunndal, Surnadal and Tingvoll. The court is subordinate to the Frostating Court of Appeal. This court employs a chief judge, three other judges, and eight prosecutors. 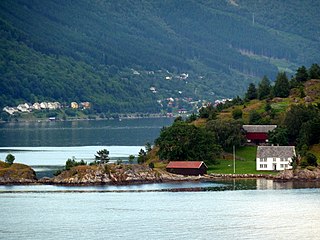