Münsing is a municipality in the district of Bad Tölz-Wolfratshausen in Bavaria in Germany.

Bad Tölz-Wolfratshausen is a Landkreis (district) in Bavaria, Germany. It is bounded by Austria and the districts of Garmisch-Partenkirchen, Weilheim-Schongau, Starnberg, Munich and Miesbach. 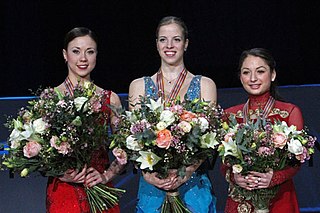 The European Figure Skating Championships is an annual figure skating competition in which figure skaters compete for the title of European champion. Medals are awarded in the disciplines of men's singles, women's singles, pair skating, and ice dance. The event is sanctioned by the International Skating Union (ISU), and is the sport's oldest competition. The first European Championships was held in 1891 in Hamburg, Germany and featured one segment, compulsory figures, with seven competitors, all men from Germany and Austria. It has been, other than four periods, held continuously since 1891, and has been sanctioned by the ISU since 1893. Women were allowed to compete for the first time in 1930, which is also the first time pairs skating was added to the competition. Ice dance was added in 1954. Only eligible skaters from ISU member countries in Europe can compete, and skaters must have reached at least the age of 15 before July 1 preceding the competition. ISU member countries can submit 1-3 skaters to compete in the European Championships.

This is a list of tables of the oldest people in the world in ordinal ranks. To avoid including false or unconfirmed claims of extreme old age, names here are restricted to those people whose ages have been validated by an international body that specifically deals in longevity research, such as the Gerontology Research Group (GRG) or Guinness World Records (GWR), and others who have otherwise been reliably sourced.

The Netherlands national football team has officially represented the Netherlands in international football since its initial match in 1905. The national team is controlled by the Royal Dutch Football Association (KNVB), which is a part of UEFA, and under the jurisdiction of FIFA the governing body for football in the Netherlands. Most of the Netherlands' home matches are played at the Johan Cruyff Arena and the Stadion Feijenoord. The team is colloquially referred to as Het Nederlands Elftal or the Oranje, after the House of Orange-Nassau. Like the country itself, the team is sometimes referred to as Holland. The fan club is known as the "Het Legioen". 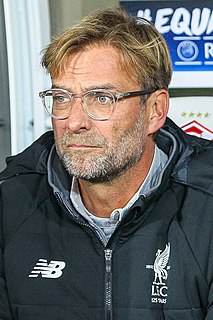 Jürgen Norbert Klopp is a German professional football coach and former player who is the manager of Premier League club Liverpool. Often credited with popularising the football philosophy known as Gegenpressing, Klopp is regarded by many as one of the best managers in the world.

BMG Rights Management (BMG) is an international music company based in Berlin, Germany. It combines the activities of a music publisher and a record label. 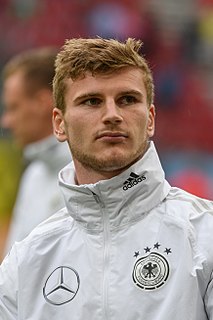 Timo Werner is a German professional footballer who plays as a striker for RB Leipzig and the Germany national team.

Brexit is the withdrawal of the United Kingdom (UK) from the European Union (EU). Following a referendum held on 23 June 2016 in which 51.9 per cent of those voting supported leaving the EU, the Government invoked Article 50 of the Treaty on European Union, starting a two-year process which was due to conclude with the UK's exit on 29 March 2019 – a deadline which has since been extended to 31 October 2019. 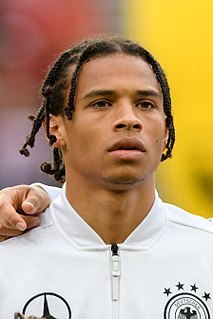 Leroy Aziz Sané is a German professional footballer who plays as a winger and as an attacking midfielder for Premier League club Manchester City and the German national team. 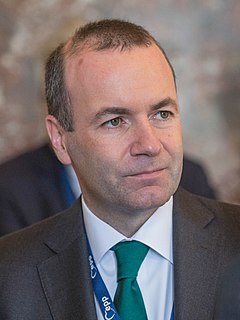 Milo Murphy's Law is an American animated television series from the creators of Phineas and Ferb, Dan Povenmire and Jeff "Swampy" Marsh, which premiered on October 3, 2016, on Disney XD. The series revolves around the title character, Milo Murphy, who is a descendant of Edward A. Murphy Jr., the namesake of Murphy's Law, which states that anything that can go wrong will go wrong. It takes place in the Phineas and Ferb universe, with several references to the show occurring across season one, culminating in a crossover at the beginning of the second season and continuing throughout that season.

Dark is a science fiction thriller web series co-created by Baran bo Odar and Jantje Friese. It is the first German-language Netflix original series and debuted on Netflix's streaming service on December 1, 2017. The first season received mostly positive reviews from critics. It has been compared to another Netflix series, Stranger Things. A second season was approved by Netflix and it set to be released on June 21, 2019.

The 2018–19 Bundesliga is the 56th season of the Bundesliga, Germany's premier football competition. It began on 24 August 2018 and will conclude on 18 May 2019. It also marked the first season without Hamburger SV, previously the only team to have played in the top tier of German football in every season since the end of World War I. Bayern Munich are the defending champions. 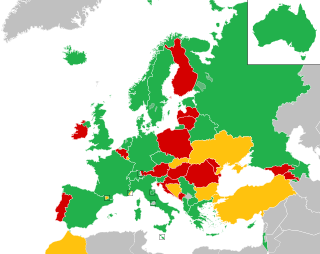 The Eurovision Song Contest 2019 is the 64th edition of the Eurovision Song Contest. The contest is taking place in Tel Aviv, Israel, following Israel's victory at the 2018 contest in Lisbon, Portugal, with the song "Toy", performed by Netta. This is the third time that Israel has hosted the contest, having previously hosted in 1979 and 1999. The contest is being held at Expo Tel Aviv, the city's convention centre; the show consists of two semi-finals on 14 and 16 May, and the final on 18 May 2019. The three live shows are being hosted by Erez Tal, Bar Refaeli, Assi Azar and Lucy Ayoub.

Volt Europa is a pro-European political movement that serves as the pan-European structure of EU parties for the European Parliament elections in May 2019. It was founded in 2017 by Andrea Venzon, supported by Colombe Cahen-Salvador and Damian Boeselager. The organisation follows a "pan-European approach" in many policy fields such as climate change, migration, economic inequality, international conflict, terrorism and the impact of the technological revolution on the labour market.

101 Dalmatian Street is a British–Canadian flash-animated children's television series produced by Passion Animation Studios and Atomic Cartoons. The series is loosely based on The Hundred and One Dalmatians novel by Dodie Smith and its film franchise. It is the second TV series, following 101 Dalmatians: The Series, to be based on the franchise. The series is set almost sixty years after the original 1961 movie.