The Māori All Blacks, previously called the New Zealand Māori, New Zealand Maoris and New Zealand Natives, are a rugby union team from New Zealand. They are a representative team of the New Zealand Rugby Union, and a prerequisite for playing is that the player has Māori whakapapa (genealogy). In the past this rule was not strictly applied; non–Māori players who looked Māori were often selected in the team. These included a few Pacific island players and a couple of African descent. Today all players have their ancestry verified before selection in the team.

The team's first match was in 1888 against Hawke's Bay. This was followed by a tour of Europe in 1888 and 1889 where the team played their first games against national teams, beating Ireland in Dublin before losing to Wales and England. Their early uniforms consisted of a black jersey with a silver fern and white knickerbockers. The New Zealand Māori perform a haka—a Māori challenge or posture dance—before each match. The haka was later adopted by the New Zealand national team, the All Blacks, as were their black shirts. In 2001, the Māori first performed the "Timatanga" haka, which describes the evolution of life and the creation of New Zealand from the four winds.

The 1888–1889 New Zealand Native football team organised by Joseph Warbrick was the first overseas team to tour the Home Nations, where the team became the first New Zealand side to perform a haka during its match v Surrey, [1] and also the first to wear an all black uniform. It was a wholly private endeavour, not organised by the NZRU.

The first New Zealand Māori team given official status was selected in 1910. [1] That year the team toured New Zealand and Australia, playing a range of combined New Zealand provinces and Australian state teams. An American Universities squad was touring Australia at the same time and two fixtures were against the New Zealand Maoris. Both were played at Sydney and were won by the New Zealanders 14-11 and 21-3 respectively. In their 19 total matches played they won 12, drew 3 and lost 4 games.

The New Zealand Maoris had not played a match outside New Zealand or Australia until 1926, when they undertook a European tour of France, England and Wales. They also played two games in New Zealand before they left, two more in Australia on the way, and also stopped in Sri Lanka for one game before travelling to France to start the European fixtures. On the return to New Zealand they stopped in Victoria, Australia for a final game in which they won 41–3. In all there were 40 games played. The New Zealand Maoris won 30 of those, drew 2 and lost 8. Full-back George Nepia remains the most notable player of that period. [1]

New Zealand has a long history of sporting contact with South Africa, especially in rugby union. Until the 1970s, this involved discrimination against Māori players, since the segregationist laws in South Africa for most of the twentieth century did not allow people of different races to play sport together. South African officials requested that Māori players not be included in teams which toured the country. Despite some of New Zealand's best players being Māori, this was agreed to, and Māori players were excluded from the first three tours of South Africa by New Zealand, in 1928, 1949 and 1960.

Nonetheless in the early period of apartheid, during their 1956 tour South Africa did play the Maoris in New Zealand. In April 2010 Muru Walters said that in 1956 Ernest Corbett, Minister of Māori Affairs, had told the team to deliberately lose to the Springboks "for the future of rugby". The Maoris lost 37–0. This was followed by Walters calling for the New Zealand government to apologise for the way it treated Māori rugby players. [2]

The professional era in rugby union began in 1995. The team lost only four of its 26 games played between 1994 and 2004, including beating England, Argentina, Scotland and Fiji. The Māori continued their winning form in 2004 beating the England Saxons in extra time in the final of the Churchill Cup in Canada.

One of their two annual tournaments is the Pacific Nations Cup, a competition involving the Pacific top national teams. From 2008 they replaced the Junior All Blacks, and they were undefeated champions, narrowly beating Australia A in the final game of the tournament. The Churchill Cup was another, which they won in 2004 and in 2006, defeating Ireland A and the USA in pool play in Santa Clara, California and Scotland A in the final in Edmonton, Alberta.

In 2005 the Māori beat the British and Irish Lions for the first time in an official match. Their preparations for this match caused them to withdraw from the 2005 Churchill Cup. In August 2012, the NZRU announced the Māori All Blacks would play three matches in the United Kingdom, including a fixture against Canada. Jamie Joseph was coach with assistance from Daryl Gibson. [3]

In matches in New Zealand in 2010 to mark one hundred years of the team, they defeated Ireland and England.

One of the New Zealand Natives' legacies was the haka, a traditional Māori posture dance with vigorous movements and stamping of the feet, to the accompaniment of rhythmically shouted words; this was first performed during a match on 3 October 1888 against Surrey in England, United Kingdom. The haka was later adopted by the New Zealand national team, the All Blacks.

In 2001, the Māori first performed the "Timatanga" haka, which describes the evolution of life and the creation of New Zealand from the four winds. This was written especially for the New Zealand Maori team by team kaumātua (elder) Whetu Tipiwai. It tells the Maori story of the creation from the void, the nothingness, the darkness to what we have today. It also tells of a gathering of young warriors, young chiefs, young rugby players who are making a statement and setting aims, objectives and strategies to achieve matauranga (knowledge), whanaunatanga (unity) and taumatatanga (excellence).

On 24 November, Clayton McMillan named a 24-man squad for a one-match series against Moana Pasifika in December 2020. [5]

Note:Bold denotes players who have represented New Zealand, Caps correct as of 25 November 2020

George Nēpia was a New Zealand Māori rugby union and rugby league player. He is remembered as an exceptional full-back and one of the most famous Māori rugby players. He was inducted into the New Zealand Sports Hall of Fame in 1990. In 2004 he was selected as number 65 by the panel of the New Zealand's Top 100 History Makers television show. Nēpia was featured in a set of postage stamps from the New Zealand post office in 1990. Historian Philippa Mein Smith described him as "New Zealand rugby's first superstar".

David Gallaher was an Irish-born New Zealand rugby union footballer best remembered as the captain of the "Original All Blacks"—the 1905–06 New Zealand national team, the first representative New Zealand side to tour the British Isles. Under Gallaher's leadership the Originals won 34 out of 35 matches over the course of tour, including legs in France and North America; the New Zealanders scored 976 points and conceded only 59. Before returning home he co-wrote the classic rugby text The Complete Rugby Footballer with his vice-captain Billy Stead. Gallaher retired as a player after the 1905–06 tour and took up coaching and selecting; he was a selector for both Auckland and New Zealand for most of the following decade.

The Junior All Blacks were a New Zealand rugby union team.

Kapa o Pango is a pre-match haka, or challenge, composed by Derek Lardelli, which is unique to the New Zealand national rugby union team, the All Blacks. Since 2005, the "Kapa o Pango" haka has been performed before rugby test matches by the All Blacks as an alternative to the usual "Ka Mate" haka. The longest sequence of "Kapa o Pango" performances is four, which happened in 2014. 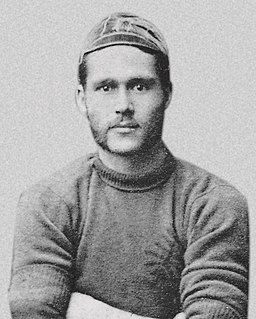 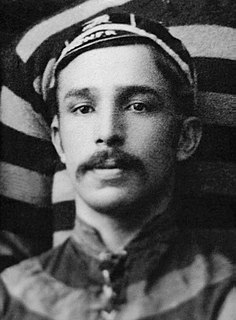 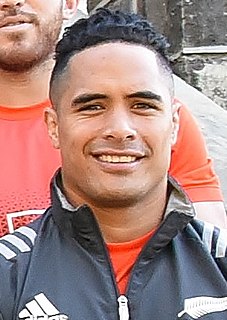 The 1967 New Zealand rugby union tour of Great Britain, France and Canada was a tour undertaken by the New Zealand national rugby union team. The series consisted of 17 matches, four of Test status against international opposition. The New Zealand team finished the tour undefeated, the first time they had achieved this in the Northern hemisphere since the 1924–25 Invincible team. 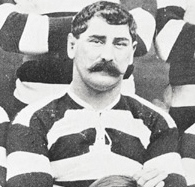 William Cunningham was a New Zealand rugby union player who represented New Zealand—known as the All Blacks—between 1901 and 1908. Most notably he toured with the Original All Blacks on their 1905–06 tour of the British Isles, France and North America. They were the first New Zealand representative team to visit the British Isles, and of their 32 matches there Cunningham played in 23. He played mainly at lock, and was added to the touring party due to his strong scrummaging ability. He played in three Test matches during the trip: against Scotland, Ireland and France, but did not play in the loss to Wales due to injury, the All Blacks' only defeat on tour.

Isaia Walker-Leawere is a New Zealand rugby union player who plays as a lock for the Hurricanes in Super Rugby and Hawke's Bay in New Zealand's domestic Mitre 10 Cup competition.

Rieko Edward Ioane is a New Zealand professional rugby union footballer who plays as a wing for New Zealand team Blues in Super Rugby and the New Zealand national team. In his youth career, he was selected to play in the 2014 and 2015 Sevens World Series for New Zealand and took part in Auckland Grammar School first XV, the top representative team in secondary school.

Moana Pasifika is a rugby union team made up of New Zealand-based players who identify with Pacific island nations, including Fiji, Samoa and Tonga, organised by the New Zealand Rugby Union.