Młyny-Wybudowanie [ˈmwɨnɨ vɨbudɔˈvaɲe] is a village in the administrative district of Gmina Strzelno, within Mogilno County, Kuyavian-Pomeranian Voivodeship, in north-central Poland. [1]

Gmina Strzelno, Poland, is an urban-rural gmina in Mogilno County, Kuyavian-Pomeranian Voivodeship, in north-central Poland. Its seat is the town of Strzelno, which lies approximately 16 kilometres (10 mi) east of Mogilno, 54 km (34 mi) south-west of Toruń, and 56 km (35 mi) south of Bydgoszcz.

Mogilno County is a unit of territorial administration and local government (powiat) in Kuyavian-Pomeranian Voivodeship, north-central Poland. It came into being on January 1, 1999, as a result of the Polish local government reforms passed in 1998. Its administrative seat and largest town is Mogilno, which lies 52 km (32 mi) south of Bydgoszcz and 62 km (39 mi) south-west of Toruń. The only other town in the county is Strzelno, lying 16 km (10 mi) east of Mogilno.

Kuyavian-Pomeranian Voivodeship, also known as Cuiavian-Pomeranian Voivodeship or simply Kujawsko-Pomorskie, or Kujawy-Pomerania Province, is one of the 16 voivodeships (provinces) into which Poland is divided. It is situated in mid-northern Poland, on the boundary between the two historic regions from which it takes its name: Kuyavia and Pomerania. Its two chief cities, serving as the province's joint capitals, are Bydgoszcz and Toruń. 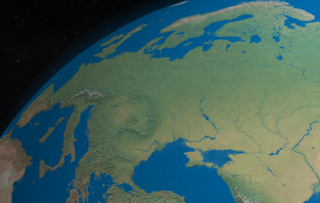 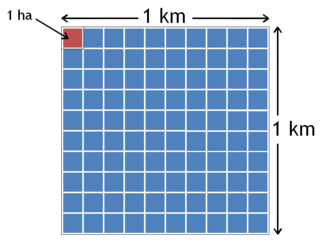 This page is a progressive and labelled list of the SI area orders of magnitude, with certain examples appended to some list objects.

The Eastern Time Zone (ET) is a time zone encompassing part or all of 22 states in the eastern part of the contiguous United States, parts of eastern Canada, the state of Quintana Roo in Mexico, Panama in Central America, and the Caribbean Islands, along with certain countries and parts of countries in South America. Places that use Eastern Standard Time (EST) when observing standard time (autumn/winter) are 5 hours behind Coordinated Universal Time (UTC−05:00).