M6 (French:  [ɛm sis] ), also known as Métropole Television, is the most profitable private national French television channel [1] [2] and the third most watched television network in the French-speaking world. [3] M6 is the head channel of the M6 Group media empire [4] that owns several TV channels, magazines, publications, movie production and media-related firms etc. It is owned by RTL Group.

M6's current[ when? ] on-air brand image suggests that it tailors its service to teenagers and young-adult demographics. Its current programs lineup include:

In 2001, M6 became the first national French television network to broadcast reality programming. Its first program of this genre was Loft Story , and was highly watched. The president of TF1 at the time, Étienne Mougeotte, promised that TF1 would never air any reality programming. However, several months later, TF1 signed a contract with Endemol to air such programming. Endemol is the same company that created Loft Story for M6.

M6 is one of the only television services in France to have science-fiction programming as part of its regular schedule. Most supernatural dramas were shown on Saturday nights in what M6 called "la Trilogie du Samedi" (The Saturday Trilogy)

The children block M6 Kid is broadcast on Monday and Sundays at mornings from 6:50am to 8:15am.

Mélissa Theuriau is a French journalist and news anchor for M6. She studied journalism and became a television news presenter. She is the former anchor and co-editor in chief of Zone interdite on French TV.

Sandrine Corman is a Belgian television and radio presenter.

La France a un incroyable talent, previously known as Incroyable Talent, is a French TV show, based on the Got Talent series. It debuted on M6 on 2 November 2006, presented by Alessandra Sublet.

Danse avec les stars (DALS) is the French version of British TV show Strictly Come Dancing, first broadcast on TF1 on February 12, 2011, the participants having been selected in November 2010. The first series finale took place on March 19, 2011. A second series was broadcast between October 8 and November 19, 2011. Since then TF1 has chosen to broadcast the program once a year, in the autumn.

Jérôme Finkelstejn better known as Jérôme Anthony is a French television presenter. Born in Nancy, France on 11 November 1968, he has presented many entertainment and reality shows on RTL9, TF1, France 2, Disney Channel, W9 and M6. He is the son of the proprietor of the Anthony clothing store and adopted the name as his stage name.

Rendez-vous en terre inconnue is a French television program broadcast first on France 5 and then on the France 2 network. It has been hosted by Frédéric Lopez for years and is now hosted by Raphaël de Casabianca, and involves taking a French celebrity to an unknown destination to live with an ethnic minority for two weeks.

6ter is a French television network which is available free-to-air through digital terrestrial television, satellite and DSL. It is a subsidiary of the Groupe M6; the name 6ter has been selected for the channel as M6's little "sister". It is available in France on channel 22.

This is a list of French television related events from 2007.

Val Kahl is a French television host, radio host, journalist, and producer. She is known in France as the winner of the Reality Television competition show "Le Grand Casting de la Télé" on NRJ12 network in 2010, a Reality TV Show looking for their next television host. 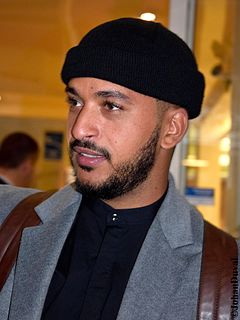 Slimane Nebchi, known professionally by the mononym Slimane, is a French male singer and songwriter. Nebchi won season 5 The Voice: la plus belle voix in 2016, and has since released a debut album and nine singles.

Florence Dauchez is a French journalist and TV host.

Afida Turner is a French-American singer, songwriter, actress, and media personality. In 2007, she married musician Ronnie Turner, the son of Ike Turner and Tina Turner.

Erza Muqoli is a French singer known for having been a contestant on the ninth season (2014–2015) of M6's La France a un incroyable talent and a founding member of the child pop group Kids United.